Increased slug pressure, slow break down into the soil and nutrient lock-up are just some of symptoms of poor harvest residue management.

All the major manufacturers have made recent upgrades to their residue management systems. Here we pick out the highlights from each.

Massey Ferguson has seen a significant increase in interest for higher capacity, performance and efficiency of straw choppers on its machines.

This is particularly so as straw-walker machines place less pressure on the system by dropping an even, single flow of material into the chopper unit. Spread of the material is dealt with via a vaned chopper hood.

The more powerful five or six straw-walker Beta, which is available with a 306hp or 360hp engine, has identical technology, but serrated knives are increased from four rows to six to deal with the extra material fed into the machine. 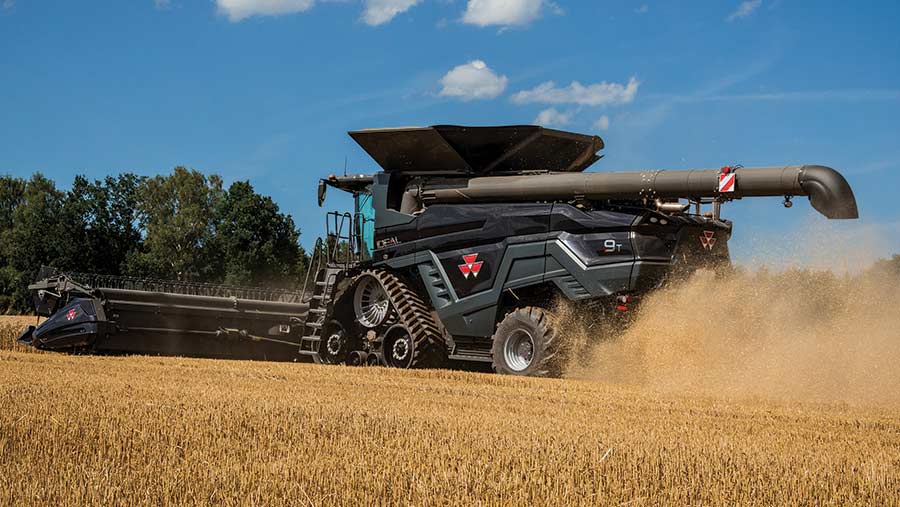 With production of the Sentora and Delta now finished, the largest in MF’s range will be the Ideal, which comes with a redesigned straw chopper unit that is able deal with the huge bulk of material from its widest 12m header.

The rotor has eight rows of knives to improve chop quality of two material streams – from the rotor and the cleaning shoe.

Overall, the ShortCut chopper is said to reduce horsepower requirements by 27% compared with previous models.

With such large machines, spreading residue evenly without sucking too much power is a concern. Rather than two spinning discs taking a 50-50 split of the workload, the ActiveSpread concept includes a passive fluted board – like the one on smaller models – to deal with 50% of the residue, distributing it across the centre of the swath width.

Two low-horsepower spinning discs then split the remaining 50% between them, vastly reducing the power requirement for throwing the straw to the remaining extremities of the cut. 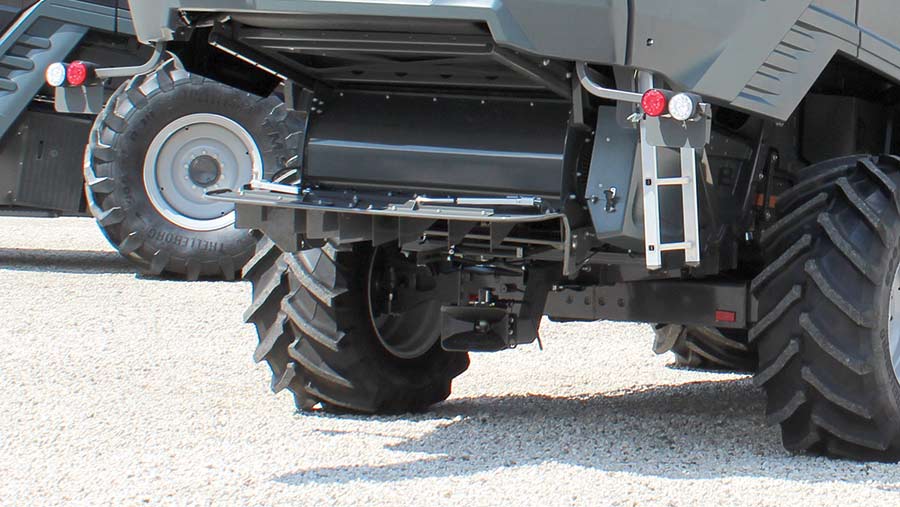 While it won’t feature on the first Ideal models demonstrated across the UK during harvest 2018, commercial models ordered for 2019 will be able engage or disengage the chopper unit without leaving the cab.

At the flick of a switch, electronic actuators will fold it out the way and a clutch system negates the need to take a belt on or off.

Belt technology has also been improved, increasing its use of Kevlar to produce parts that work without undue wear across a range of rotor sizes from four- to eight-rows of knives. 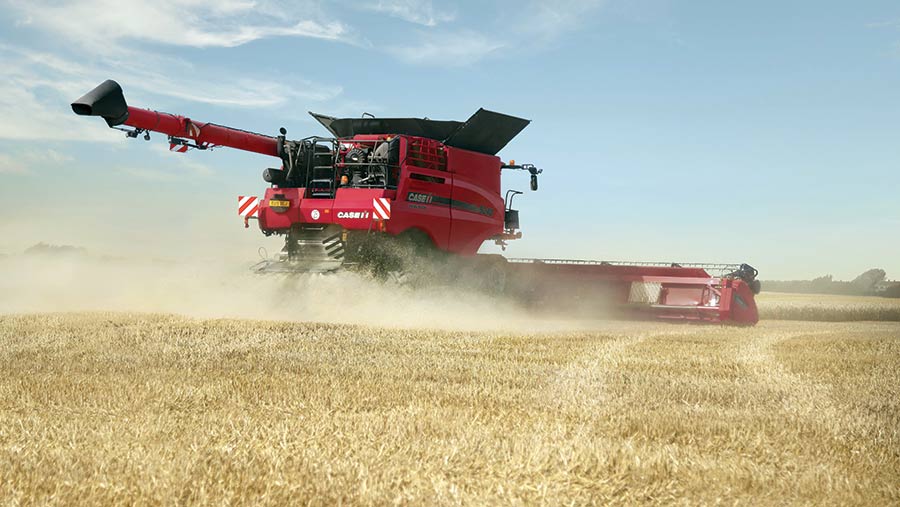 With typical header widths up to 25ft on its 140 series combines in the UK, getting a good chop and even spread hasn’t been too much of an issue for Case’s engineers.

On the machines at the top end of the 240 series, however, it has been more of a challenge, particularly on the largest 8240 and 9240 harvesters that are munching through 10.6-12m of crop.

The 140 machines carry the firm’s Integral straw chopper, which has a 52-knife chopper rotor, working against 32 stationary knives to get decent chop quality.

A dual-disc hydraulically driven spreader then throws the material across the width of the cutterbar and is fully adjustable from the cab for changes such as more energy for damp crops or altering spread direction to account for side winds or slopes.

For 240 series customers, they still get the integral straw chopper, but also the addition of a second chopper unit which improves the chop and spread over the wider width headers on large machines.

Case says the Axial-Flow threshing system draws a lot of air in through the feeder house, creating turbulence through and out the back of the machine, making it a challenge to throw residue out to the 45ft-wide headers.

To help solve the issue, four years ago Case visited Canadian retrofit chopper specialists Redekop and now has a commercial agreement to fit its technology as standard to the 8240 and 9240 and an option on the smaller 7240.

The integral unit pre-chops the straw and feeds it into the mechanically driven hood-mounted unit for the final cut.

Fan blades at either end of the rotor generate air speeds of up to 90mph to blast the double-chopped material evenly up to 45ft. 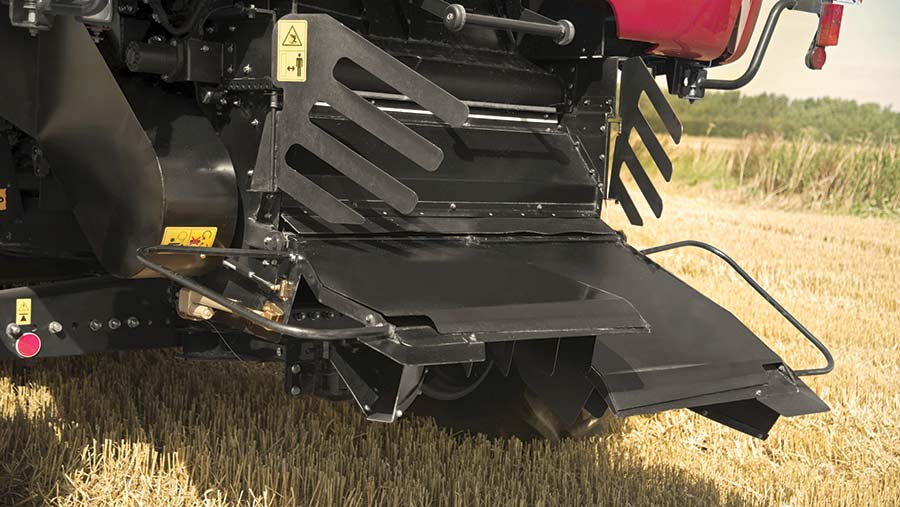 The whole process has a power requirement of about 50-60hp and in the sometimes-damp and bulkier crops of the UK, stationary blades can be retracted in the initial integral chopper to minimise power draw when the going gets tough.

Customers using the system report a fine chop and good spread, even behind the biggest headers, leading to faster residue breakdown and less issues with slugs.

The unit adds about £27,700 to the price where it comes as standard, so those purchasing the smaller 7240 might think twice before speccing one on a new machine, particularly if it is cutting 30ft or less. 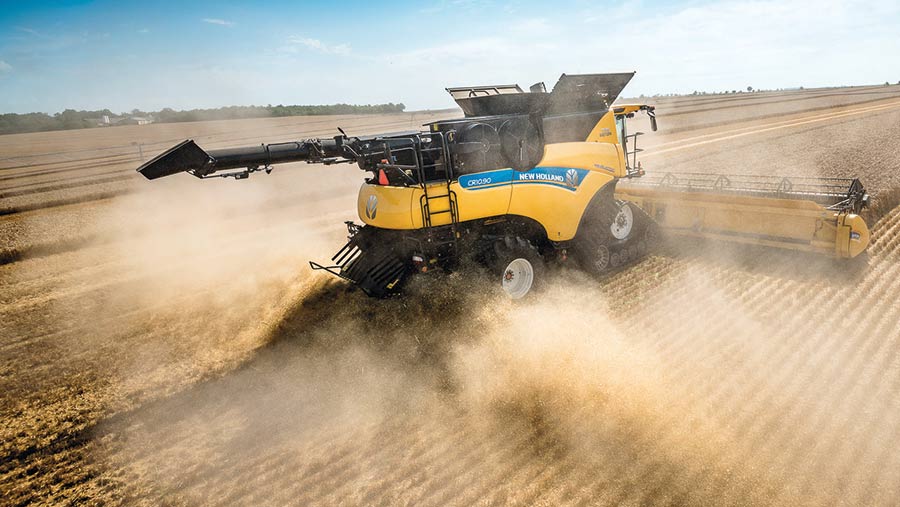 Two years ago, New Holland conducted a Europe-wide survey on customer priorities for future combine development and, crop residue management came out top of the list.

Since the survey, the manufacturer has completely reviewed its chopper and chaff spreader arrangement on its rotary CR-series machines, with the first updated models being put to work for harvest 2018.

Rather than the chopper rotor doing both chopping and distribution, the range’s Opti-Spread system chops the straw and drops it on to two spinning discs for spreading.

In its latest incarnation, the two hydraulic motors driving the discs have been upgraded to deliver 25% more torque and maintaining an even spread width when the going gets tough. 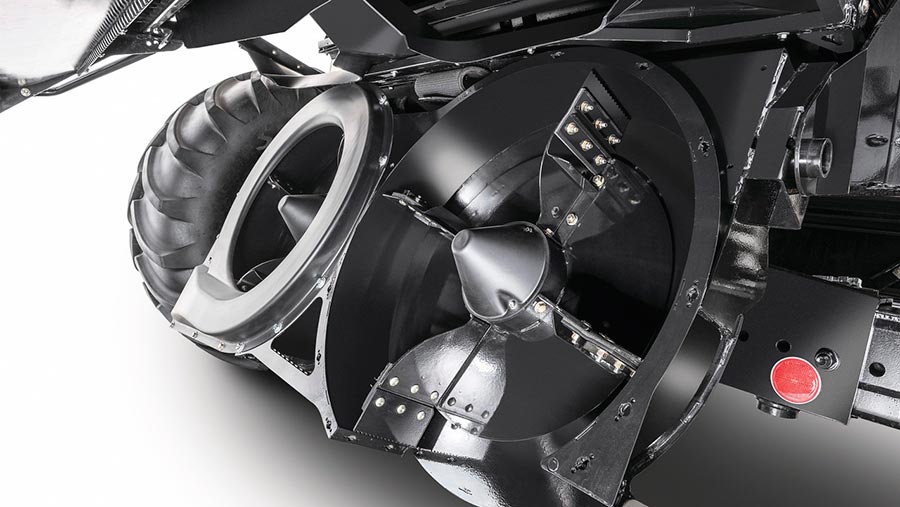 The chopper rotor itself has also been reinforced, while longer stationary knives, V-shaped paddles and increased rotating speed from 3,500 to 4,000rpm all help to achieve a finer chop and more consistent spread pattern than previous offerings.

With chaff being light, getting adequate momentum to throw it out to 45ft is a challenge, so instead of relying on an impact-based spinning disc, a new patented air crop-flow system uses plastic shrouds to channel air generated by the chaff-spreading rotors.

New Holland say one of the main advantages of separating the straw and chaff management is unlike competitor machines, the chopper can be completely disengaged when dropping the straw into a windrow, consuming less horsepower and reducing wear to chopper components.

On the conventional straw walker CX7 and CX8 machines, headers are typically 30ft and the need to overhaul the residue management system has been less urgent.

As such, the latest machines can have the Opti-Spread system fitted as an optional extra, but many customers are expected to choose the standard option which uses the same technology seen on 2017 CR models.

The only tweak sees V-shaped vanes fitted to its impact-based chaff spreading system, giving a more uniform spread out to 30ft.

Finally, the firm’s CX5 and CX6 straw-walker machines aimed at smaller mixed farms have a flexible system that allows the operator to choose between three residue management options.

They can either drop straw and chaff in a windrow for increased feed value of bales, separate the chaff and straw for less dusty bales destined for equine use.

Otherwise, the four-row chopper can be engaged to shred and spread both chaff and straw across the cutterbar. 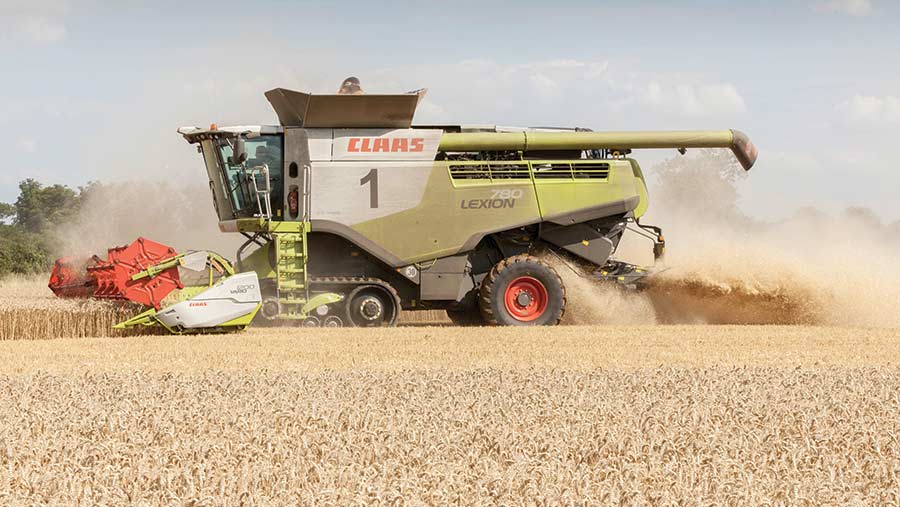 German combine maker Claas updated the residue management systems on their Lexion range two years ago including a starting with a wider diameter chopper rotor cylinder, longer floor to help with spread distance and quality.

In the guts of the rotor itself is 108 dual-bladed knives, combined with a cross blade and stationary blades to provide a fine straw chop.

For spreading, customers can choose either a standard vaned deflector hood or a mechanically driven power spreader, which consists of two counter-rotating rotors to spread the combined straw and chaff fraction over the swath.

To account for differences in capacity requirement across the range, Claas simply fit a wider chopper unit on its 770 and 780 with more knives, while the 740, 750 and 760 have a slightly narrower option with fewer knives, without sacrificing chop quality.

An option added to its Lexion package is wind, slope and crop condition compensation to avoid the residue overlapping or being blown over the standing crop.

Each of the spreading rotors has two movable deflectors that adjust spread width both together or independently to guide the flow of material exactly where it needs to be.

This is adjusted from the cab, but a further option is automatic discharge direction adjustment, which uses two sensors situated on the light brackets either side of its rear end. Sensitivity of the sensors can be tweaked through the Cebis operating system.

As part of the upgrade, all chopper rotor adjustments were made tool-less and there is now an option to control these hydraulically from the cab to save time and operators getting covered in dust. Going from chopping to windrowing can also be done from the comfort of the cab.

For the increasingly popular mid-range Tucano models, there are three residue management choices for potential buyers that vary in complexity.

Chopped straw and chaff is thrown over a width of more than 9.3m by two counter-rotating spreading discs and direction can be controlled from the comfort of the cab. 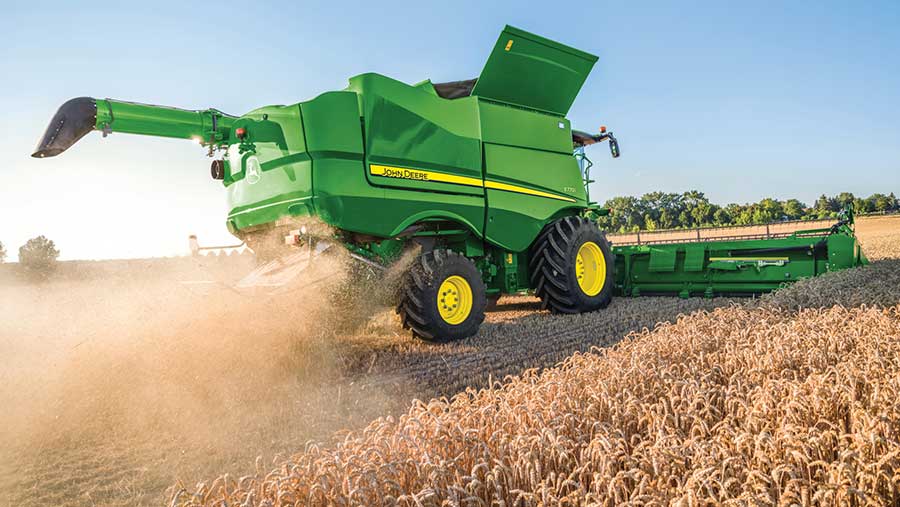 As headers have increased in width John Deere has upgraded its chopping and spreading technology to deal with increased volumes and spread requirements, with a big change when the flagship S-Series machines were introduced in 2012.

There were also some upgrades in 2016 on the W- and T-Series straw walker machines, which have two options available – the Fine-cut chopper recommended for headers up to 22ft and the Extra-fine-cut up to 35ft.

Choice will also depend on how much straw is chopped on the farm and cultivation system, with those in min- or no-till situations typically opting for the Extra-fine-cut set-up, which costs about £1,536 extra on five walker and £1,841 on six walker machines.

Both options had an increase in knife contact area plus a reduction in the transition gap between knife tip and chopper floor in 2016, increasing the contact area by 136% compared with the previous model.

This has maintained the same chop quality, but can run with less knives for reduced running and maintenance costs.

Both also have infinitely adjustable stationary knives, which gives good control over chop length, but a balance must be struck between power requirement and the desire for finer residue.

Both come with tail wind compensation as standard, with electronically-adjustable vanes on the tailboard allowing operators to set a directional bias of residue flow from the cab.

While few, if any, T- and W-Series machines will be running 35ft headers, those getting close to that width can take advantage of the vertically adjustable tailboard, which enables throw distance to be controlled for different header widths. 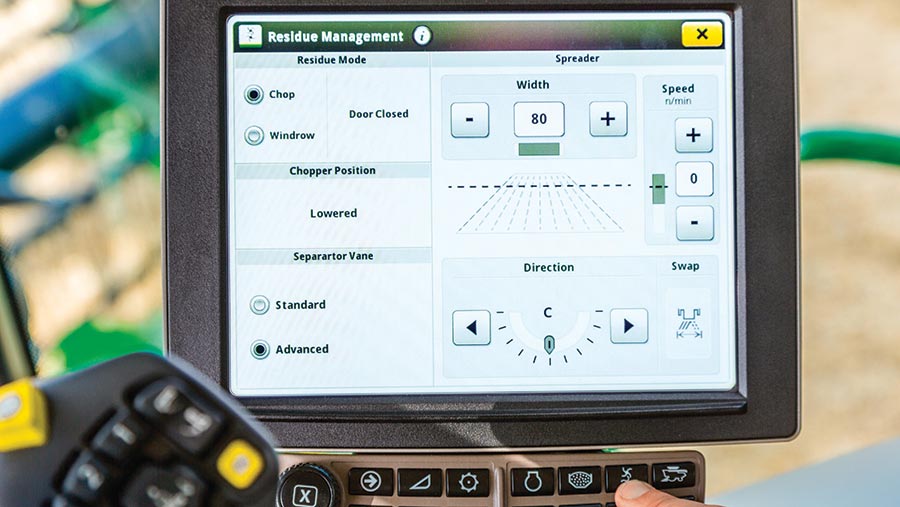 For the S-Series, buyers get the Premium residue management system, which includes an extra-fine-cut unit kitted out with 100 knives for optimum chop quality.

There are two tailboard options, with the basic model being a manually adjusted version, but for headers over 30ft John Deere recommend the Advanced PowerCast system, which uses two hydraulically powered variable speed rotors to spread residue out to 35ft.

There is also a centre divider between the two discs and combined with rotor speed control, allows the operator to control the spread pattern accurately. The PowerCast system retails at an additional £9,285.

Another neat feature which comes as standard is the chop-to-drop control, enabling the operator to switch between rowing up or chopping straw at the touch of a button.

A dividing door channels residue over to chopper in drop mode, but when in chop mode, vanes on the door help even-up the feed of straw from threshing rotor into the chopper, giving a uniform chop and spread.

The rotor can also be run at two speeds – 3,000rpm for small grains and oilseeds and a slower 1,400rpm for grain maize – and most growers in the UK will opt for serrated knives for better chop performance.