Claas and New Holland might reign supreme in European harvesting circles, but Agco is hoping to knock them down a peg or two with its highest output and most sophisticated combine ever.

Other headline figures include average outputs of more than 80t/hour and tank unloading rates of 210 litres/min, all in a chassis that’s just 3.3m wide.

According to Agco, these specs mean it will outperform Claas’ range-topping Lexion 780 and New Holland’s CR10.90 – the current holder of the combining world record.

See also: Articulating Tribine combine is king of the US harvest

See the animated video of how the Agco combine works.

Those are ballsy claims from a manufacturer that hasn’t enjoyed the greatest of success in the combine market over the past few years. So how does it think it’s going to do it?

Well, first of all Agco sidelined the designs for its Dronningborg-designed Massey Ferguson Delta and started from scratch. That means the new machines are based on a twin-rotor separator rather than the hybrid setup of the old models.

The Ideal range is also a joint project across several of Agco’s brands. This means it has had input from Fendt, Massey Ferguson, Challenger and Laverda, as well as some of the group’s precision farming divisions.

As a result, it will be offered in one graphite-grey colour scheme, leaving a handful of chrome badges as the only nod to the different brands. In Europe, the UK and Ireland that will come in the form of Fendt or Massey Ferguson, with North America getting Challenger.

All brands will also be able to sell the full three-model range. This starts with the 450hp Ideal 7, which is apparently equivalent to a Claas Lexion 760. This is powered by Agco’s own 9.8-litre engine, comes with a single version of the rotary separator and has the option of 25ft, 30ft and 35ft headers.

The Ideal 8, meanwhile, has twin rotors and gets its power from the same 12.4-litre MAN block used in the Fendt 1000-series tractors. It also has the option of a larger 40ft header.

However, it’s the range-topping Ideal 9 that’s going to be hogging most of the limelight.

This has a 15.2-litre, six-cylinder MAN unit that develops 647hp and is the model that Agco hopes will outperform the best Claas and New Holland has to offer.

That power output doesn’t quite win in a game of top trumps – the latest New Holland CR has about 700hp under the hood – but Agco reckons it will process more crop thanks to its extra-long rotors and smooth crop flow. 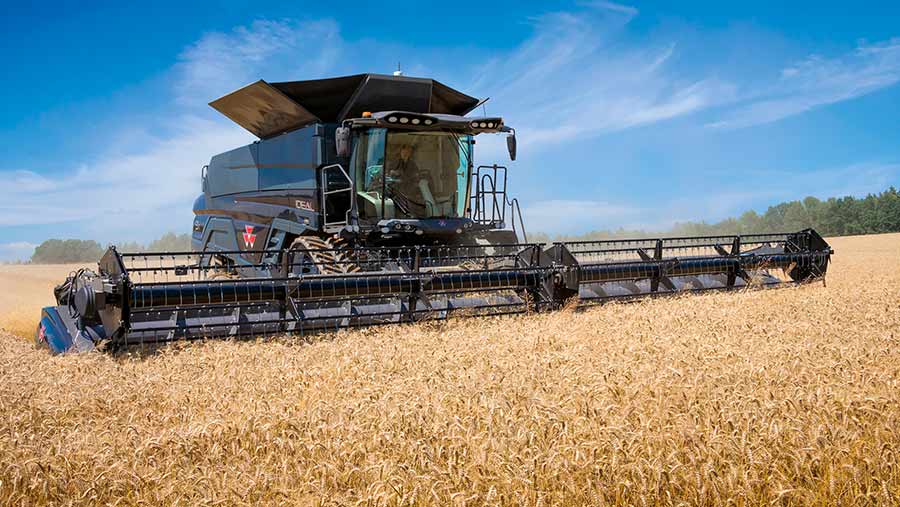 These “dual-helix” cylinders run the length of the machine, measuring 4.8m long and 600mm in diameter. They are fed with a rotor at the front to even out crop flow, but all threshing and separation takes place in the rotors.

Rasp bars at the bottom end do the bulk of the threshing, leaving a spiral arrangement of fingers to wind the crop the rest of way along the rotor.

This supposedly gentle form of separation saps 20-50% less power than some more aggressive systems and means the straw is less damaged at the end of it all. In fact, Agco claims the windrow behind the Ideal is comparable to a straw walker machine.

Once separated, the grain drops into a new composite (posh word for plastic) collection pan. This is formed in two sections, has no moving parts and is dished to help even up the grain flow into the cleaning shoe. Supposedly, this can compensate for slopes up to 15%, reducing losses over the back.

Cleaning comes in the form of a fairly standard upper-and-lower sieve setup and there is a three-part fan providing the airflow. The straw and chaff spreaders are also new designs and can spread up to 50m to fit in with the model’s largest header.

This huge table should be available shortly after the combine’s launch, but because it is more suited to lower-yielding north American crops, the 40-footer will remain the more popular option in Europe.

To help deal with the prodigious grain output efficiently, Agco has fitted the Ideal with a 17,100-litre grain tank and 210-litre/min unloading auger. This will wind out the entire contents in 1min 35secs, which puts it well above others on the market.

However, this is an optional extra and standard versions will have a more typical 140-litre/min unloading speed. Various unloading auger lengths will be available, too, with the largest folding across the rear of the machine for travelling on the road.

Other optional add-ons include a quick-hitch system that connects all header inputs at the touch of a button without hopping off the seat. There’s also a sophisticated crop-flow monitoring system that can be set to automatically adjust settings as conditions change. 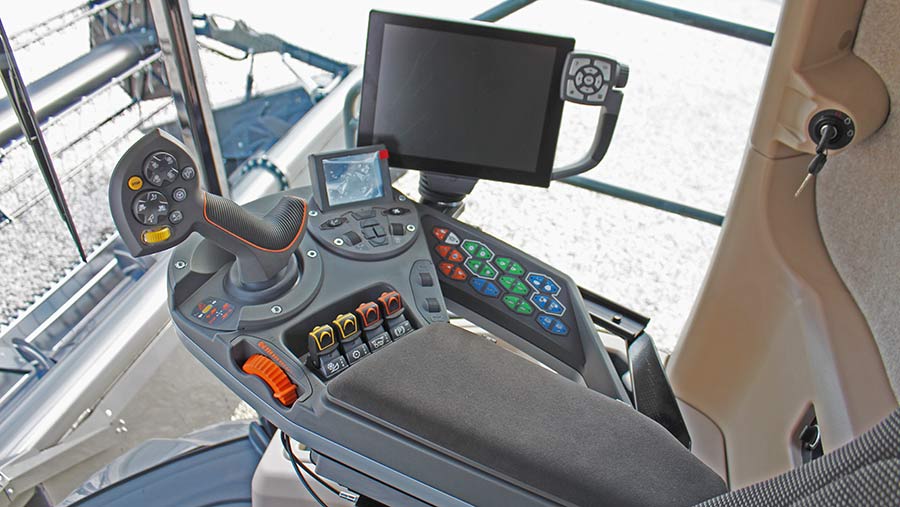 This uses more than 50 acoustic sensors throughout the machine to monitor the amount of crop in each section at a given time.

Effectively, these tell the driver if there are any bottlenecks in the crop flow and helps them to tweak the settings to smooth it out. There’s also a camera for monitoring grain quality.

All this appears on the in-cab screen and there’s a simple controller for the driver to change the machine’s bias between grain quality, losses and output.

For example, if the grain quality camera shows there are cracked grains, you can slide the controller to prioritise grain quality, leaving the combine to change the necessary settings itself.

The system can also be controlled via an iPad app, which includes a fancy graphic showing how the crop is moving through the machine.

While we’re on the subject of controls it’s worth mentioning the new cab. This has been given slim front pillars to improve visibility, extra powerful air conditioning and a bucket-sized fridge under the passenger seat. 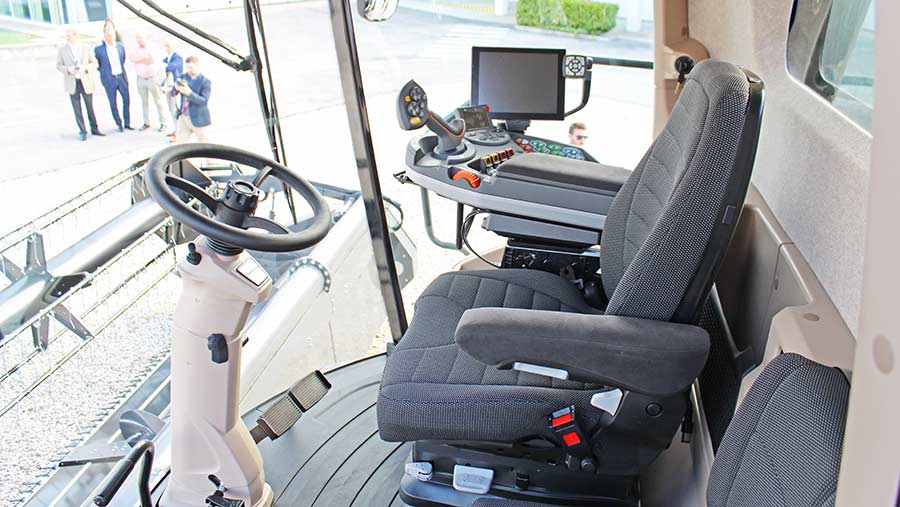 The armrest, meanwhile, is classic Fendt and almost identical to the one on the Delta. That means the main header functions are grouped on the joystick, with electric spool-style switches for putting the threshing and header drive into gear.

To help get the combine down narrow lanes, Agco has managed to keep all models within a 3.3m track width when fitted with 800mm tyres or 660mm track units.

Upping the track size to 760mm puts the total width to about 3.5m, and going for the biggest 910mm versions pushes it out to 3.8m.

The track units themselves have been developed at Challenger’s Jackson, Minnesota, factory. These come with suspension, run on twin idlers and have a top transport speed of 40kph.

Agco is also offering all Ideal models with its Paralevel hillside system that can compensate for slopes up to 14%. These models sit on 800mm tyres and have a 3.5m track width.

The Ideal range will get its official launch at the Agritechnica show in November and there will be a small number of machines available for harvest 2018, with full-scale production kicking in by 2019.

Agco has ambitious targets to sell 2,500 Ideal combines a year globally and 1,000 machines in Europe. These will be built at the former Laverda factory in Breganze, northern Italy, which is being expanded to accommodate the new line.

There’s no official price yet, but senior Agco bosses say that it will “have premium performance and a price tag to match”. That means it’s likely to be similarly priced to either the Lexion 780 or New Holland CR10.90 it’s setting its sights on.

However, having shelled out more than $200m (£153m) on the development of the new range, we expect to see some pretty aggressive marketing activity to get the machine established.

As for Agco’s other combines ranges, there’s little change planned. The Delta is likely to be phased out, although this depends on sales over the next year or so, and the Laverda-derived straw walker ranges will continue, albeit with a few updates.

Agco also plans to keep the Gleaner brand of transverse rotor machines going in the US.