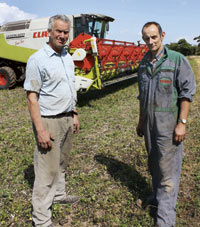 The enormous appetite of Claas’s flagship Lexion 600 has prompted the German firm to develop a 12m (40ft) header to match. Nick Fone visited one of the first farms to take delivery of a pre-production test unit

When he sold it last year, Richard Ledger’s two-year-old Claas Lexion 600 had cut more than 4000ha (10,000 acres). That’s an impressive feat for one combine, but covering the ground at such a rate puts a strain on both men and machines.

Conscious of this, Mr Ledger was keen to find a way of easing the pace of harvest without compromising output. A wider header seemed the obvious solution, but, at the time, Claas’s widest cutterbar stretched to just 10.5m (35ft).

Then last harvest he heard of a prototype 12m (40ft) header working in Europe. “I knew this had to be the way to go,” he explains. “Without even seeing it in action, we put our name down to be one of the first in the UK to trial it.” 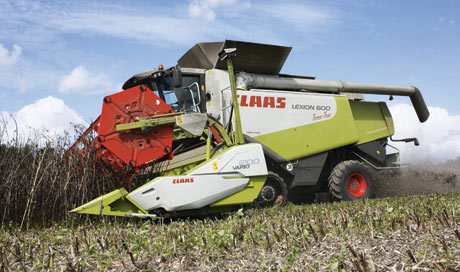 When his new Lexion arrived at Little Mongeham near Dover earlier this year, Mr Ledger was disappointed to find it was delivered with another 10.5m header – the same as before. But Claas promised he would have a pre-production 40-footer by harvest. True to form, a Vario 1200 cutterbar rolled into the yard just days before the combine was due to head into the first of the rape.

Like its smaller predecessor, the 12m table employs a split reel and split auger, supported by bearings at the centre. What makes it different is a split knife. Driven from either end of the header, four knife sections overlap at the centre.

And rather than using chains and sprockets, shafts now power the knife with synchronised gearboxes, ensuring the two knives run in tandem. Drive for the left-hand side zig-zags from the pto shaft on the right of the combine along a 12m (40ft) shaft running inside the table auger and out to a gearbox on the opposite end.

When the operator wants to switch from short to tall crops and extend knife-to-auger clearance using the Vario’s hydraulically adjustable facility, he must exchange the two knife drive-shafts for longer versions at the same time as fitting the header fill-in plates.

“Doing away with belts and chains makes the header drive much smoother and potentially more reliable,” says driver Nigel Richardson.

“But, being a pre-production unit, the mechanical side of things isn’t perfect.”

Working in beans with the side-knife on, the cutter-bar cannot be drawn right back in because the reel tends to clash with the upright knife and, down under the guards, the drive-shafts interfere with the hydraulic pipework. Claas promises to put this right this winter.

“Niggles aside, the 40-footer is awesome in the field,” says Mr Richardson.