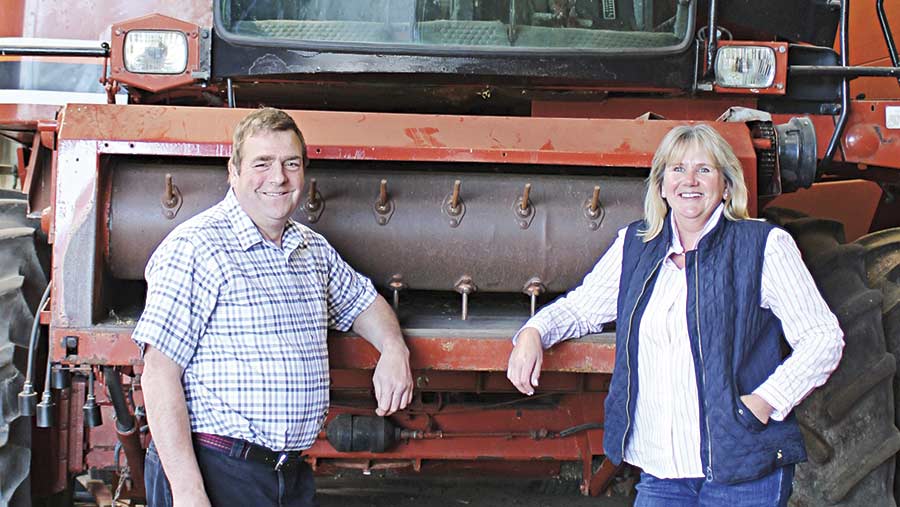 Since the late 1980s Staffordshire farmer David Rushton has had a sideline buying, repairing, selling and exporting Laverda combines.

Having cut his teeth on early New Holland/Clayson 133s and 135s, his attentions turned the Italian brand during a chance opportunity.

“A local contractor ran a fleet of six 1970s Laverda M150s and when he packed up they were all entered into his dispersal sale,” he says.

“I didn’t really go there to buy one, but they when they started knocking them down for about £500 apiece a friend and I ended up getting the whole lot.”

With a yard then rammed with combines, Mr Rushton set about selling off the machines they didn’t need.

To his surprise, one of the enquiries came from a chap based in Guyana, South America, who wanted a simple, tough machine that could cope with harvesting rice.

He did a deal, worked out how to export it and with the help of his wife Kathryn has been sending them over there ever since. 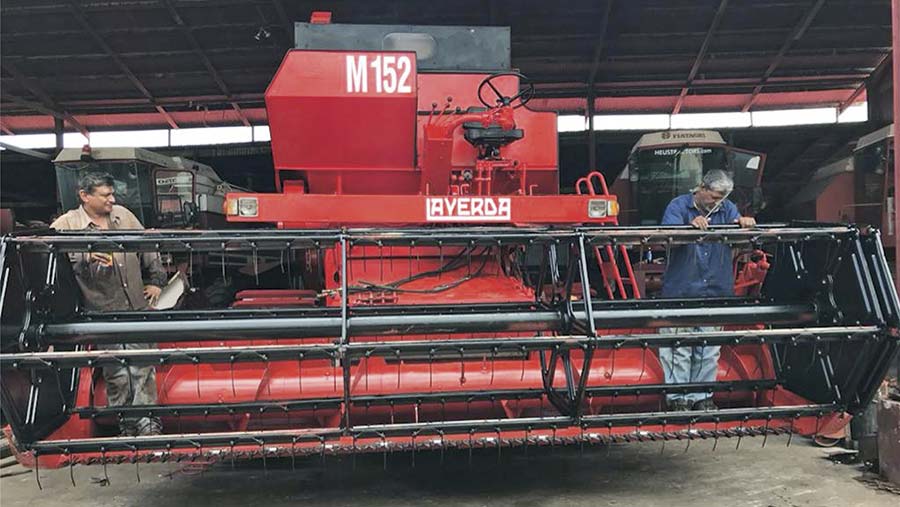 Sadly, Kathryn’s health has deteriorated in the past few years, so family friend Debbie Langridge now helps with the day-to-day running of the operation.

Almost 30 years on, the demand in Guyana is still focused on older, simple four- and five straw-walker machines.

Buyers tend to favour models fitted with Fiat engines rather than Perkins, wobble box knife drives (instead of the old Pitman type that could shake the header to bits) and, crucially, minimal electronics.

That rules out the M182, which was well ahead of its time in 1981 as one of the first combines to offer full electronic controls. 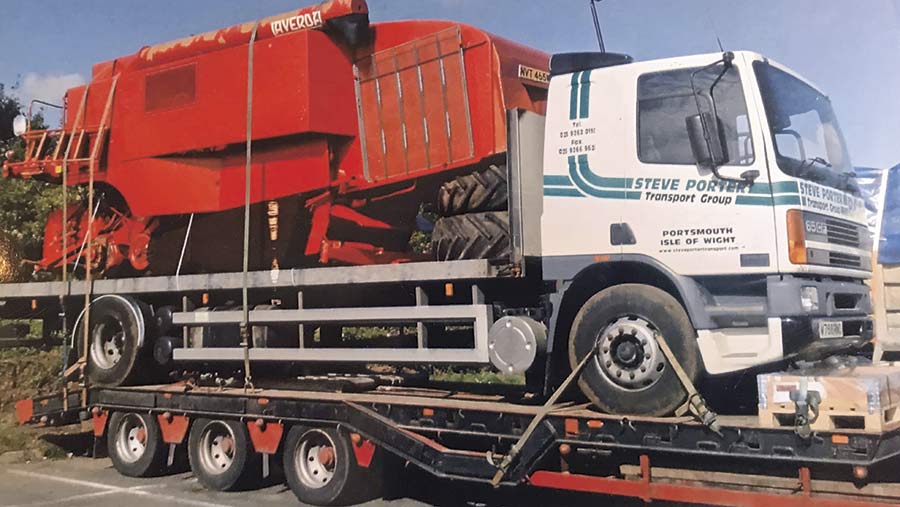 The fact Laverda overengineered its combines and galvanised the tinwork means they stand the test of time better than most. Therefore, machines on up to 5,000 hours are still popular.

To get the combines to South America as efficiently as possible, Mr Rushton came up with the idea of piggybacking them on an 18t flatbed lorry (also in high demand) and shipping the two as one unit.

To fit the machines neatly on the truck bed he removes the wheels, stacking them under the rear hood, and puts any spare parts in the grain tank. 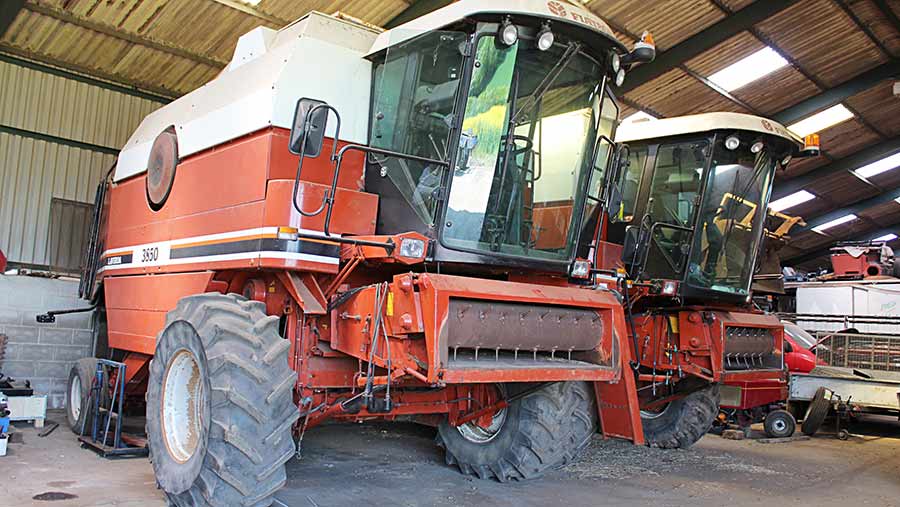 Headers are shipped separately, with units up to 16ft being the most popular and 18ft generally the maximum.

The combine/lorry package is then hauled on a low loader to Ipswich dock before beginning its transatlantic journey on the top deck of the ship. When this makes its return journey it’s largely packed with rice and timber.

Typically, the journey takes two weeks and includes various stop-offs in the Caribbean, such as Trinidad and Tobago.

Sometimes the combine and lorry combo has to be shifted around the boat, which is when damage can sometimes occur. 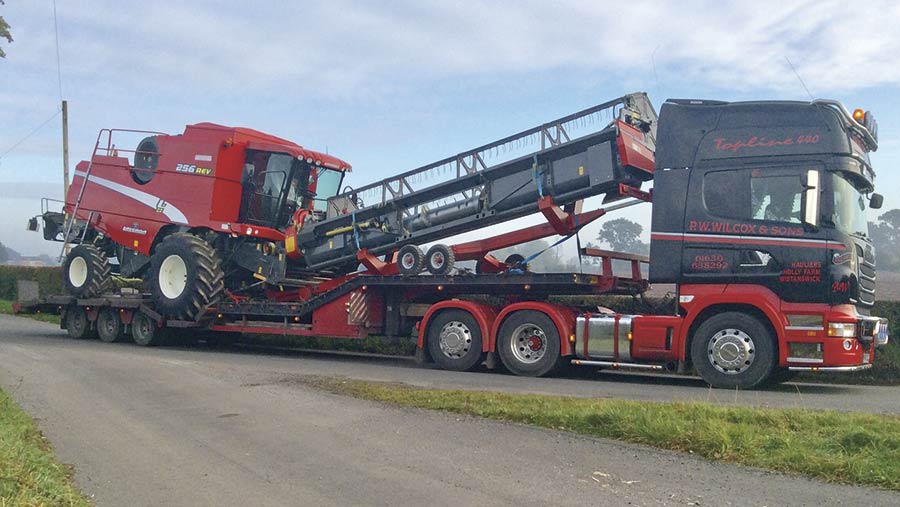 After their arrival in Georgetown, Guyana, the buyer treats the machines to full overhaul, including fresh paint if needed. They build and fit their own steel track units, too, which help them stay afloat in the paddy fields.

Tooth peg drums are also installed instead of the standard rasp-bar units for more efficient threshing of the tough rice plants.

Pakistan is another country Mr Rushton has been dealing with for the past 15 years or so.

This market has similar preferences to Guyana, but is willing to take a wider range of machines in more varying states of repair.

Rather than being shipped whole, these eastbound machines are disassembled and packed into shipping containers. 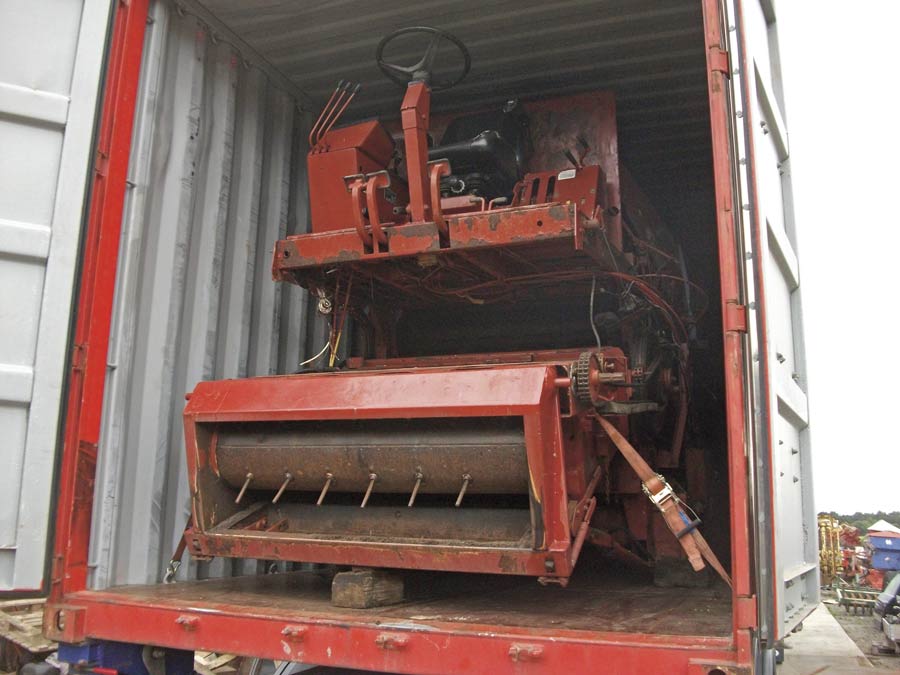 On average, three combines can be shoehorned into two containers. However, this often involves removing the wheels, grain tank, cab, engine and cutting off some sections of tinwork.

“With the big six-walker 3850s you have to do some serious work,” says Mr Rushton.

“Getting an 11ft 6in combine through a 7ft 6in container opening takes a bit of doing.”

Once they arrive in Pakistan the machines get completely rebuilt before heading out for cereal and rice harvesting duties.

New Holland 8070s are another particular favourite in this region and Mr Rushton has sent some of these over too. 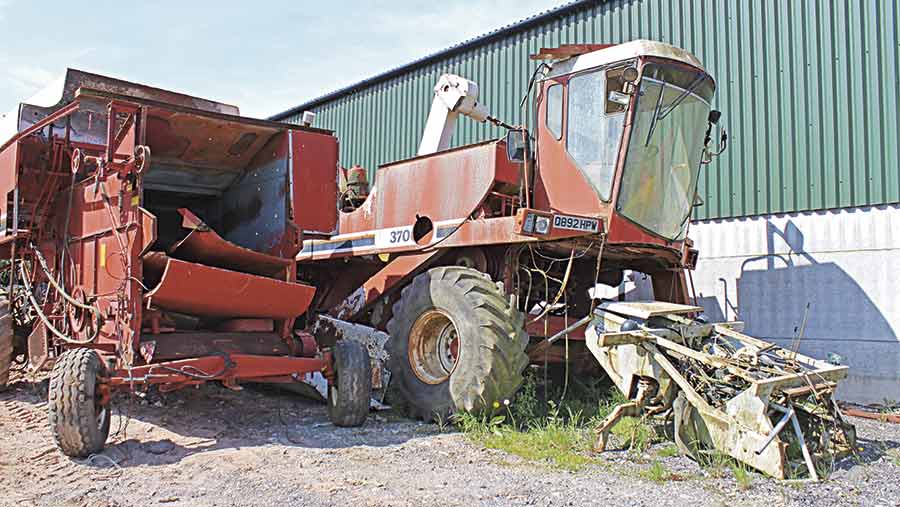 Almost all of the Laverda combines shipped abroad are sourced from within the UK, and due to the sheer number of machines sold in the 1970s and 80s there has been a fairly rich supply over the years.

However, due to exports, breaking and scrapping, Mr Rushton reckons there are now just 80 to 100 Laverda combines still running here.

These range from the 1960s-built M120s up to Laverda and McCormick-branded 2000 series. Many are located in the west of the country and the midlands, where the main Laverda dealer Burgess had it highest concentration of dealerships.

However, the last dealers to sell the combines in the UK were Yorkshire-based Wilfred Scruton and Mike Garwood in Hampshire, so those areas are where some of the latest models can be found.

One of the most desirable Laverda models is the 3790, which is what Mr Rushton uses to cut the 80ha of arable cropping on the 180ha family farm near, Uttoxeter, Staffordshire.

These combines were built between 1985 and 1992 and have five straw walkers, a 175hp Iveco/Fiat engine a hydrostatic transmission and a 16ft header. Tidy versions of these can still command high prices.

These include genuine and non-genuine new spares as well as some second-hand items from machines he has broken.

Generally, Laverdas are pretty resilient, so the most common replacement parts are the usual consumables such as belts, bearings and knife sections.

However, the 3600 and 3700 non-hydrostatic machines are notorious for clutch problems.

“To be honest, they’re an embarrassment,” says Mr Rushton.

As a result, he sells modified versions that correct most of the problems associated with the original item.

He also sends parts all over the world, including Poland, Finland, Australia and New Zealand.

Laverda in the UK

Laverda started building combines at its base in Breganze, Italy in the 1950s, but it wasn’t until the late 1960s they started to make their way into the UK, though importer Bamford.

At that time Burgess was the main dealer and with more than 100 branches in the UK it quickly got a foothold on the smaller end of the market.

With plenty of keen deals on offer it managed to saturate many areas with Laverda combines.

Most of the UK machines were built during the 20-year period when Laverda was partnered with Fiat, which is why many sport Fiatagri decals.

However, things started to change when Fiat bought Ford New Holland in the mid 1990s and began selling many of its machines under the New Holland brand.

Laverda-badged combines were still being sold in the UK at this time, but some machines, such as the TL58i hillsider, appeared in New Holland livery.

When Fiat added Case-IH to its portfolio, the EU competition authorities insisted it sell off one of its combine businesses. As a result, Laverda moved to the Argo group in 2000 and for a time, some machines were sold as McCormicks.

Four years later Argo and Agco struck a deal whereby Laverda supplied combines to Agco to sell under its own brand colours. By 2007 that had developed into a 50/50 joint venture.

Agco closed its Dronningborg combine plant in mid-2010, transferring production to the Laverda factory in Italy, before buying the remaining 50% share from Argo in 2011.

The Breganze factory is now home to Agco’s entire European combine operation from the Laverda-based straw-walker models sold in Massey Ferguson and Fendt colours, up to the new Ideal range of rotary machines.