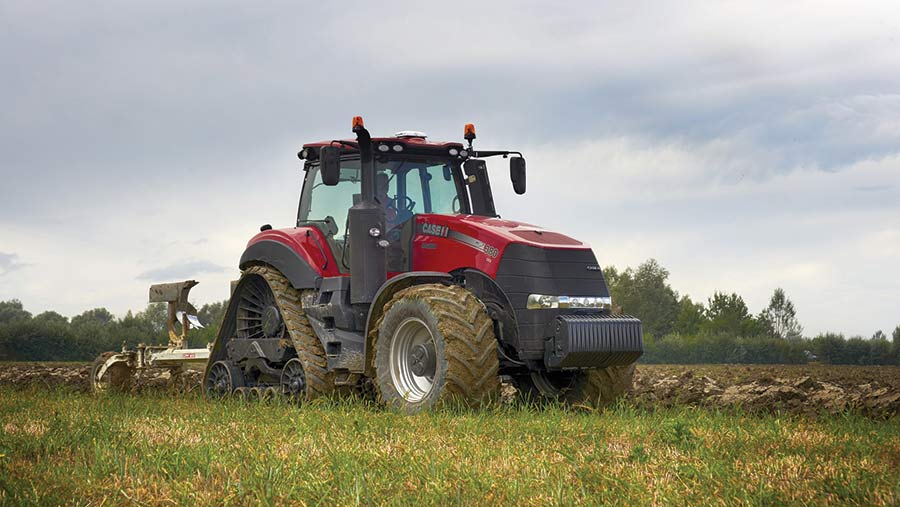 You have to go right back to the 1820s to witness the beginnings of Case IH.

The McCormick family was developing a new reaping machine that was demonstrated successfully in 1831 and Cyrus McCormick started a company to make the new reaper in the 1840s.

It was soon the world’s biggest manufacturer of harvesting machines.

The International Harvester company, meanwhile, was formed in 1902 when McCormick merged with their biggest rival, Deering, and three smaller harvester manufacturers.

The result was America’s biggest farm machinery company and it contributed the letters IH to the present-day Case IH name.

The Case part of the name comes from Jerome Increase Case, another of the farm machinery pioneers. He used a threshing machine for contract work and, after experimenting with design improvements, formed a company to build his improved thresher.

Production started in about 1847 and by the 1860s the J I Case company was the world’s largest threshing machine manufacturer.

The first Case threshing machines were powered by horses turning a revolving shaft, but steam power was beginning to take over.

Britain dominated the early development of agricultural steam power and British-built engines were exported around the world, but Case started building steam engines to power its threshing machines in about 1869, and by the late 1880s was easily the world’s biggest manufacturer.

Increasing competition from tractor power in the early 1900s caused serious problems for most of the big steam engine companies in the US and in Britain.

Case handled the transition from steam to tractor power with impressive efficiency, building its own experimental tractor in 1892.

The 1892 prototype Case tractor was abandoned due to engine problems

It was based on a steam traction engine chassis and was one of the world’s first five or six tractors, but Case decided, no doubt correctly, that the primitive petrol engines available then were too unreliable for farm use.

It abandoned the project and concentrated on its threshers and steam engines while waiting for petrol engine technology to improve.

Case tractor development began again in about 1908, with the first production tractors arriving in 1910.

As well as expanding its tractor production to meet the increasing demand and continuing to build steam engines for a rapidly shrinking market, the company’s new confidence in petrol engines also took Case into car production.

This started in 1911 when it distributed cars made by the Pierce company, and in 1912 Case bought Pierce and sold the cars under the Case name.

In spite of a big investment, including a Case racing car team, the car business failed to match the success of the tractors and production ended in 1927.

The new Case tractors arrived just in time to benefit from a huge surge in tractor sales during the 1914-18 war.

The principal rival was International Harvester, and throughout most of the war years IH was the world’s biggest tractor maker, a position it held until Henry Ford’s new Fordson took the lead in 1918.

As well as being big, IH was also innovative – its 8-16 Junior model introduced in 1917 was the first tractor with a proper pto.

Many years later, when the world’s tractor makers agreed to use a standardised pto, the rotation speed and direction were based on the IH Junior.

More innovation arrived in 1924 when the first IH Farmall tractors were delivered to customers.

The original Farmall was designed mainly for rowcrop production, with generous underside clearance for attaching mid-mounted equipment plus rear-wheel steering brakes and a tricycle-style wheel layout for manoeuvrability.

As well as tractors, International Harvester offered one of the biggest equipment ranges during the 1920s and 1930s, covering almost every type of farm machine from combine harvesters to barn equipment for preparing feed.

Like Case, IH also ventured into car production, starting in 1907. The cars were soon joined by an immensely successful range of commercial vehicles and IH soon became one of the leading American truck brands with a range that also included buses and pickups.

Truck production became a separate business in 1985 with a name change to Navistar International.

Other examples of International’s wide-ranging interests included a range of garden tractors and machinery and the company became a leading manufacturer of construction equipment.

Solar designed a new compact gas turbine for powering helicopters, and one of these engines was used to power an experimental tractor built by IH and demonstrated in 1961.

Gas turbines perform best when running at constant load and speed for long periods, ideal for aircraft or ships and as stationary power units, but not for powering a tractor.

The turbine in the HT-340 experimental tractor, derated from its normal 80hp output to a more modest 40hp, was probably designed to attract publicity – which it did with considerable success – but the tractor also featured more practical ideas for evaluation.

One was a hydrostatic transmission, offering single-lever operation and infinitely variable speed control long before CVTs were available.

IH was also among the first companies with a production tractor that used a hydrostatic transmission in 1967.

One million man-hours of combine testing

IH history had started with an improved harvesting machine and another major harvesting breakthrough came in 1977 when the first 300 IH rotary combines were harvesting crops in the US and Canada.

Some of the earliest development work on what would later become the Axial Flow combines started in the 1950s.

The IH engineers experimented with a number of single and multiple rotor separation systems to replace the conventional cylinder, rear beater and straw walker system, and it was the single, in-line rotor with front impeller and a static rotor housing with concaves and separation grates that was adopted for the Axial Flow.

The success of the Axial Flow is believed to be one of the main reasons why the Tenneco group made a successful takeover bid for the IH farm equipment business in 1984.

Tenneco, a US company with a wide range of interests, already owned Case following a takeover in 1967.

Case had major financial problems during the 1960s, and one of its weaknesses had been an ageing combine harvester range that was losing market share. Case had stopped building combines in 1972, and the IH takeover brought in the Axial Flow range as a replacement.

IH was not the only acquisition as Tenneco invested in its rapidly expanding agricultural business. It made a successful takeover bid for the David Brown tractor business in 1972 to bring smaller models into the Case stable.

A joint venture with Cummins created the CDC engine company in 1977, and the Case construction equipment business was strengthened by taking over the US-based Drott company in 1968 followed by a major investment in the leading French hydraulics maker Poclain, in 1985.

The big news in the farm equipment industry in 1999 was the Case IH merger with New Holland, forming CNH Global, a name later changed to CNH Industrial.

CNH is owned by Italy-based Fiat Industrial and is among the world’s top three farm and construction machinery giants.

CNH products, including New Holland and FPT engines, are made in 64 factories worldwide and the group has 69,000 employees.

Case International is one of the best-known agricultural equipment brand names worldwide, and tractors are still available under the Steyr brand name in some European markets.