New Holland has reclaimed the combining Guinness world record by harvesting 551.6t of wheat in eight hours, just weeks after it was beaten by the company’s rival, Claas.

The record-breaking run, which took place at Castle Heaton Estates in Northumberland last Friday (26 September) ran from 12.50pm to 8.50pm, harvesting an impressive 551.6 tonnes of wheat. 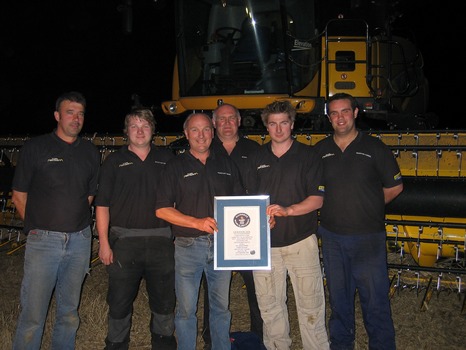 “We read about the recent World Record in the press and we were confident we could do better. Our experience in using two New Holland CR980 combines and our high efficiency approach to cereal production means we are very well placed to take on a challenge like this, and we’re delighted to have been so successful by operating the latest 591hp CR9090,” said Mr Grimsdale, managing director of Mountfair Farming Ltd based in Swinton in Berwickshire, UK, who organised the attempt on the Guinness World Record.

“Operating the CR9090 combine from New Holland, our team harvested 53.5 hectares, achieving an average rate of 68.95 tonnes per hour in Robigus winter wheat. Consuming just 13.3 litres of fuel per hectare, the record highlights the efficiency of the CR9090 combine in a challenge that reflects real-world farming conditions.

“The record took place harvesting three fields of 25ha, 14ha and 20ha which yielded an average of 10.32 tonnes/ha with an average moisture content of 17%. The straw length was between 58 and 63cm and stubble height left was between 20 and 30cm. The loss level throughout the day was a low 0.5%.”

The conditions for harvesting in the North of England this year have been every bit as challenging as other areas of the UK, and at the time of the record attempt, we had to cope with the higher humidity and shorter days experienced at this time of year.  “In more favourable conditions, the CR9090 could be expected to achieve an even higher output and could possibly exceed the 600 tonnes level,” says Mr Grimsdale.

During the first three hours of the record attempt the CR9090 was averaging 77.3 tonnes/hour, but this average fell back when more undulating fields with shorter work runs were encountered.  Eddie Allan, Manager of the local dealer Lloyd Ltd., stated: “To achieve what they have done with the ground and weather conditions is just remarkable. This proves that the CR9090 is a real winner – we have a number of customers very interested in purchasing one.”

The record attempt was adjudicated by Carlos Martinez of Guinness World Records, who had travelled up to the site in the Borders earlier in the week.

What do you reckon? Is New Holland the undisputed champion? Have your say on our forums.