A mildly revamped version of New Holland’s CR 8.80 “small-frame” rotary combine is being showcased at a series of harvest demonstration days alongside other models in the manufacturer’s straw walker and rotary harvester line-up.

The main change to the 2017-spec machine is a new engine; the 11-litre FPT Cursor 11 replaces a slightly smaller power unit and features common rail fuel injection in place of individual pump injectors to add performance and meet the latest emissions requirements. 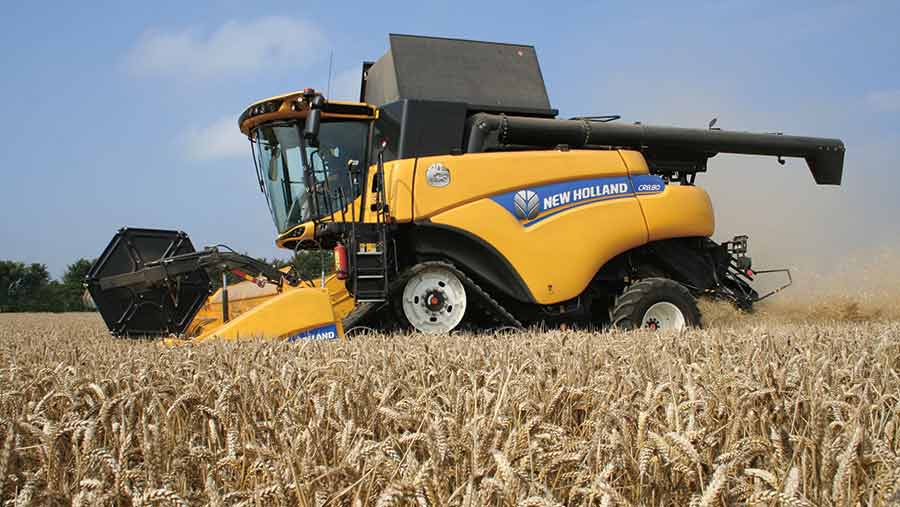 “By running this engine a little warmer than the previous one, we can get the particulate matter down during the combustion process and avoid having to fit a filter,” points out Nigel Honeyman, combine specialist.

“That means the only after-treatment needed is the AdBlue injection to deal with NoX as before.”

The higher running temperature does demand a bigger cooling pack, which has involved some engineering work around the engine bay. But as far as operators are concerned, it’s business as usual.

Power is up a tad at 496hp versus 490hp and so is the torque output, which will help the twin rotor threshing and separation system cope with fluctuating load.

“In good harvesting conditions, the CR 8.80 will pretty much equal the performance of the CR 8.90, which is a more powerful and physically bigger combine,” says Mr Honeyman.

“But the combine’s larger sieve area will give it the edge in more difficult conditions, and especially in wheat varieties such as Crusoe that can be a bit tougher to deal with.”

Standard equipment for the UK includes the Dynamic Feed Roll drum that gives a positive feed of crop into the two rotors and the Twin Pitch rotor configuration.

This replaces the distinct threshing and separation sections of the previous design with short rasp bars progressively spaced further apart to stretch and thin the crop mat as it passes through the mechanism to encourage grain separation.

“For crops such as spring barley, which can have quite sticky straw, adjustable vanes at the top of the rotor housing can be used to slow progress and keep the straw in contact with the rotors for an extra rotation to get the grain out,” adds Nigel Honeyman.

Cleaning is handled by a grain pan and sieve assembly with separate drives and a traditional fan.

“Sieve movement is more important than the size of the sieve openings, so having separate drives means sieve movement can be set more aggressively if necessary to get optimum performance,” Mr Honeyman explains.

“And we prefer a traditional fan over a turbine because air volume is more important than air velocity and you get a more consistent airflow with less sensitivity to fluctuating engine speed.”