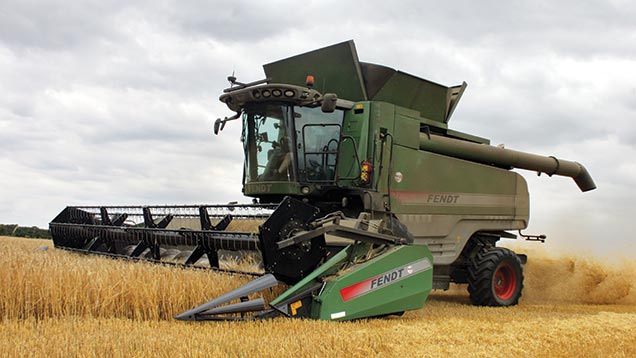 One Suffolk farmer was so determined to get his hands on a Fendt combine, he imported one. Martin Rickatson explains.

Fendt combines may be almost non-existent in Britain, but that didn’t stop John Davie-Thornhill getting hold of one. He farms 540ha of combinable crops between Diss and Bury St Edmunds and snared the one-year-old Fendt 9390R from Spain thanks to his partnership with his local Agco dealer, who rents part of his yard.

Despite a few glitches, he has been pleased with the way the combine has performed.

“It was tested in the UK, including on our farm, but while it was sold in mainland Europe, they decided not to bring it to the UK,” he says.

“I’d always been keen on the straight-through, unpitched single-rotor design rather than the pitched layout some other machines use, finding it simpler and less abrasive, and I’d acquired a 1987 MF8590 a while ago, to support a straw-walker MF we were running.

“Having seen what it could do, I was keen to try an up-to-date version, and I still wanted to move away from both drum-and-concave and straw walker arrangements. I didn’t want a combine with a massively wide cutterbar, but a rotary that would produce good outputs with a mid-sized header.”

One of the last from the Continent

“When MF introduced a new series of 9005 Fortia rotaries in North America and mainland Europe, we were again involved in some UK testing, but Agco decided not to bring them here, as they felt the twin-rotor hybrid Delta more suited the UK market.

But although they’ve now stopped bringing the single-rotor machines to Europe, they agreed to help me source one of the last from the Continent.”

Ultimately, it wasn’t a red combine Mr Davie-Thornhill purchased, but a green one. Agco’s multi-brand strategy means that, as well as the MF 9500 combines that have succeeded the 9005s, the Hesston factory has also been producing the axial rotor machines in Fendt green for selected European markets.

Since its arrival, Mr Davie-Thornhill says that, while there have been a few glitches, he has been pleased with the way the 9390R has performed.

John Davie-Thornhill: The 9390 has proved itself in UK conditions, giving us good outputs from a mid to high-end rotary with good grain quality and decent straw for our buyers

“On the whole, it has performed exactly as I expected, although we’ve had some frustrating issues with small things such as electrical actuators. But it has proved itself in UK conditions, giving us good outputs from a mid to high-end rotary with good grain quality and decent straw for our buyers.”

Put to the test

Operator Jon Backhouse, who only joined Mr Davie-Thornhill’s team this summer, reckons to have learned its characteristics fairly quickly, although he feels there’s more output to come from the machine.

“It will happily average 30t/hour in wheat, but we’ve not pushed it hard yet, as it’s got plenty of capacity for our acreage. There are seven concave sections, and the spacings at the rear could do with doubling to an inch to boost capacity.

“The chopper also needs some fine-tuning to handle dense wheat straw. But it’s simple to service, with only six main grease points. And as our land is mostly in a single block, while it’s a wide machine at 3.5m, that isn’t too much of an issue.

A brief history of rotaries

The roots of Agco’s single-rotor combine technology stretch back to 1980 when White Farm Equipment launched its 9700 Axial Harvest Boss with an axial, horizontal threshing and a separation rotor.

The design morphed into the updated 9720 model, and was taken over by Massey Ferguson (MF) in the mid-1980s when the latter bought White’s combine business.

The machine was rebadged as the MF8590, and a handful of the V8 Perkins-powered models, featuring a 4.26m (14ft) long rotor, came to the UK. However its chunky dimensions – in particular, transport width – hampered its success in the UK.

Fast-forward to the 1990s, though, and Agco, which had purchased both White and MF and was still making axial-rotor combines in Missouri (and latterly at the Hesston plant in Kansas) brought its redesigned 8780 version over here.