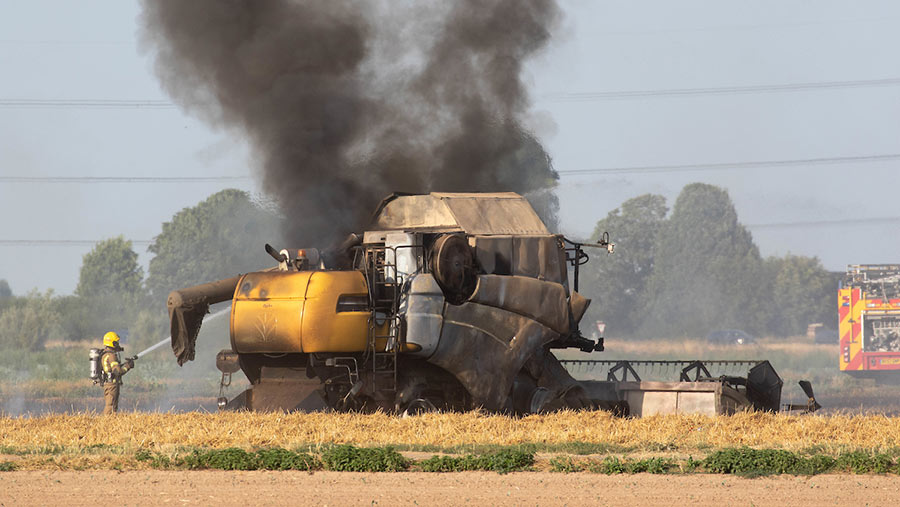 Isolated in an air-conditioned capsule at the front of the machine, combine operators are usually completely unaware when there’s an inferno slowly building behind them.

By the time they do get a whiff of smoke or catch a lick of flame in the mirror, it’s usually far too late to do anything about it. 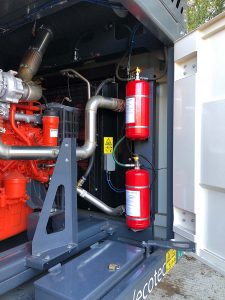 Even if they are early enough to attempt to tackle the blaze, the puny fire extinguishers fitted on most machines have little impact.

It is a worry for many farmers, particularly those covering vast acreages with high-output machines that quickly become smothered in tinder-dry dust and chaff.

But a small start-up firm from Peterborough reckons it has a solution to this perennial problem.

It is not the first setup of this type, but according to the firm it has a number of elements to make it more effective.

The firm is yet to install a system on a combine harvester, but it does have several working on large waste shredders.

Apparently, the setup would be very similar for both machines.

See also: Combine harvester fires: Why do they keep happening? 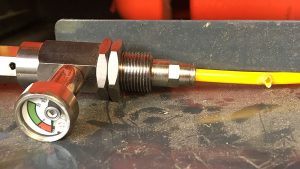 At the heart of the system are two 9kg pressurised tanks of monoammonium phosphate fire suppressant powder and another 9kg tank of foam.

These are connected to a network of tubes around the machine, and when a fire is detected, the powder and foam are piped along them and distributed via a series of nozzles.

It sounds simple enough, but there are a few nifty bits of engineering to make it work.

First, there’s the part of the system that detects the fire. This is a plastic tube filled with inert gas that runs next to the powder and foam lines. 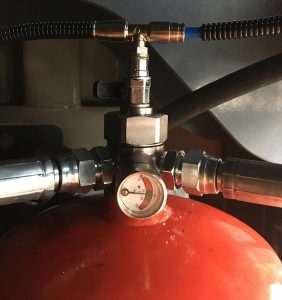 Valve on top of cylinder

When this comes into contact with a naked flame or reaches a temperature of more than 200C, it will rupture.

The gas is released instantly, causing a sudden loss of pressure that triggers the powder tanks to discharge throughout their network of pipes.

Unlike some systems that only deliver the suppressant to the original source of fire, Mr Townsend’s version distributes it to the whole system to prevent any chance of spread.

The reason powder is picked for the job is that it quickly extinguishes all types of fire, including fuel, chemical and electrical-based blazes.

When the detection tube bursts, it also triggers a timer for the foam tank, which is set to discharge when the powder has almost run out.

The foam then acts as a cooling agent, quickly taking the heat out of the fire and minimising the chance of reignition. 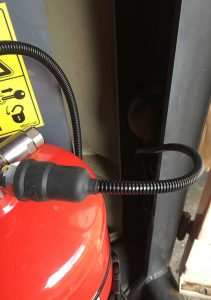 Another add-on to the system is an automatic engine kill switch and battery isolator to help further reduce the chance of spread and protect the machine’s systems.

There is a manual trigger, too, which can be installed outside the machine or in the cab, as well as a digital display for showing the health of the system, including how much pressure is in the tanks.

Buyers can also opt for an external alarm with flashing lights to alert the driver and trailer drivers that all is not well.

As for the location of the pipes, they’re mainly run around the engine bay and hydraulic services on the machine, where most fires begin.

For risk of being damaged, the network of pipes can’t be placed in the threshing mechanism, but according to the maker it can still cover about 70% of the areas where fires most commonly start.

For the areas it can’t reach, the company also recommends fitting an additional 12kg fire extinguisher on the side of the machine. These cost £84.99. 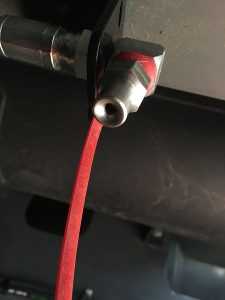 Most of the components used in the system come from Luxembourg-based Rotarex, but the timer system for the powder and foam release, as well as the engine and battery cutout switches, are Mr Townsend’s own creations.

If a fire does trigger the system then it’s apparently fairly simple to reset.

After the powder and foam has been washed away with a pressure washer, all the engineer has to do is replace the ruptured section of detection tube, flush out the pipework and fit new powder and foam tanks.

New dust caps are also fitted to the nozzles as they blow off when the system is activated. 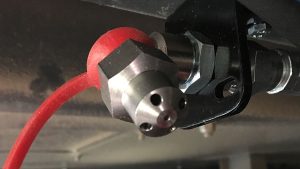 To prevent any seepage or accidental discharge from rodent damage, Mr Townsend recommends isolating the system while the machine is in storage. This is done by turning the taps off on each of the three extinguisher tanks.

Turning them on again reactivates the system, but he says that ideally it should be given a pre-season service to make sure it’s working correctly. This costs £175.

Fitting a dual 27kg extinguisher system to a combine harvester, including all the added extras, will cost about £4,000.

Those on more of a budget can opt for a simpler version without the electric engine and battery cutouts, which comes in at £3,075, or there’s a powder-only system that costs £2,590.

In theory, the fire suppression system can be fitted to any machine or implement, and the firm has already looked into fitting it to a baler. Apparently, a simple powder-only unit would be most suitable and prices would start at about £1,500.

PCML says it has approached some insurers about offering reduced premiums for machines fitted with the technology, but sadly they’re not willing to do so until the systems have been proven to work.

Another element to PCML’s firefighting kit is a trailed fire tender built around a pair of 1,000-litre IBCs.

Mr Townsend came up with the idea after noticing the drop in the number of fire engines, particularly in rural areas.

He says there’s also a trend for fire stations to reduce the number of heavy and expensive fire tenders in favour of smaller units for fighting domestic fires.

His simple tender uses two standard IBC tanks mounted on a trailer chassis – giving it similar capacity to a standard fire engine – and as it weighs just under 3.5t it can be towed by a 4×4.

The water is discharged though a high-capacity fire hose using a WH20 pump powered by a Honda engine.

This is rated to 500 litres/min, meaning it will drain the two tanks in about two minutes.

For smaller vehicles, the firm is also building a 1.5t version based on a single IBC tank.

Mr Townsend is still putting the finishing touches to them, so prices aren’t available yet.