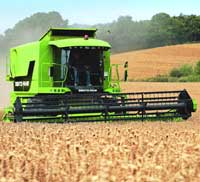 Same Deutz-Fahr has started producing tractors and combines in its new factory to the south of Moscow.

SDF is one of the first western agricultural machinery manufacturers to open a plant in Russia devoted to the assembly of tractors and combine harvesters. Its success could, says the company, mean the construction of a second factory capable of higher outputs – an investment expected to exceed €20m.

The range will initially be limited to four models of tractor in the 150hp-300hp range, plus combines from 300hp to 450hp. At maximum capacity the plant will have an annual output of 2000 tractors and 500 combines.

This project has also led to the creation of a joint-venture company – Same Deutz-Fahr Russia Agricultural Machinery – in which SDF holds a 75% stake. The other 25% is held by EuroAgroPostavka, the distributor of Deutz-Fahr products in Russia.

“We are one of the first western machinery companies to open a genuine factory producing tractors and combine harvesters in Russia,” points out Massimo Bordi, SDF Group chief executive.

He adds that the state of farm machinery in Russia has declined greatly during the last 20 years, creating a need for new and technologically up-to-date products.

“The demand for high capacity machinery is strong even though the world economic crisis has hit Russia and its agricultural industry extremely hard,” he says. “The Russian government is vigorously supporting the manufacture of agricultural machinery within the country at the expense of imported products – hence the validity of SDF’s decision to produce in situ.”

SDF is already present in Russia with its own commercial branch and parts store. In 2009 there was a fall in sales due to the severe crisis suffered by the Russian agricultural sector along with tough credit restrictions.

However, thanks to a new manufacturing project and the continuing growth in demand for the latest agricultural machinery, the 150 tractors sold in 2008 are expected to increase to 1000/year by 2013.