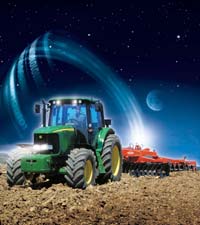 Occasionally, a strand of technology comes from nowhere and starts to weave its way through the machinery world. And before you know it, everyone’s using it.

Take satellite navigation systems. Thirty years ago they were something that helped a US missile home in on its target now there are many of us who have got one lurking on our car dashboard.

Telematics is another system that is moving from the fringes of farming to the mainstream. What is it? Simply a way of using sensors to measure every detail of a machine’s performance and transmit the information almost instantly back to a computer or mobile phone.

It is widely used throughout the haulage industry (especially on refrigerated lorries) for telling companies where their trucks are and how long they’re spending on the road. Formula One cars have it, too, and by 2010 most new cars are expected to have some sort of telematics system installed.

Also, telematics is likely to be the method used if the government decides to take the pay-per-mile approach to gathering tax and it is already being used by some insurance companies as a way of establishing risk.

Agriculture has used telematics in a modest way for some time. Valtra developed a tractor with a built-in mobile phone that automatically rang the dealer if there was a malfunction. It also allowed the driver to turn on the engine block heater by phoning it, so the cab was already warmed up when he got in.

Now manufacturers are marketing telematics as a way of improving efficiency and safeguarding machines against theft and misuse. Claas has offered a fully-fledged telematics system in its combines for several years and John Deere upgraded its system for tractors and foragers to offer all the bells and whistles at the beginning of this year. New Holland and Agco say they also have systems in the pipeline. 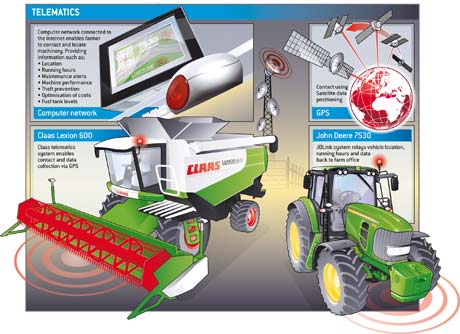 Claas has had a telematics system in its combines since 2006. It is standard on the Lexion 600 and a £5000 option on any Lexion after 2006, says technical product specialist Edward Miller.

As soon as the ignition starts, an on-board datalogger starts to record selected performance information from the combine every 15 seconds. This information is then converted, bundled together and stored on a memory card in the Cebis in-cab monitor.

Every 15 minutes, an on-board modem transmits the information via the GPRS network to a server in Germany, where it is stored and ready to be accessed via the internet.

“Once logged in, operators are able to choose the machine they want to find out about, the date and time they want the information and what information they need,” says Mr Miller. “What they then see is a 15-second snapshot.”

Using the various drop-down menus on screen, operators can select what information they require. For example, engine load and throughput information can be selected and plotted on a graph for ease of analysis.

On top of this technical information, the system allows information to be overlaid on Google Earth maps (pictured), so the farmer can see physically what is going on in the field. 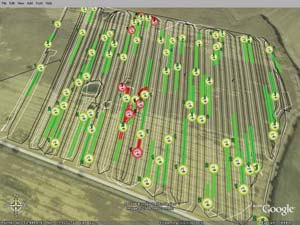 “Often, the most valuable information is the work-per-hour analysis, ie exactly what the machine is doing while the ignition key is turned.”

Here, drivers and operators back at base can see in amazing detail what the machine is doing and how it’s performing. Where is it unloading? How long is it taking to turn at the headland? How much of the field has it done? The system can tell you all that, and more.

“They may want to establish why the machine was idle or why was it stopped for an hour. Or even, if there was a breakdown, how the machine was running in the lead-up to it.

“You can adjust the analysis and statistics options to what you want to see,” adds Mr Miller. Telematics is able to plot exactly what the combine is doing almost in real time, whether it’s unloading, the grain tank’s full or if it’s stopped.

“By identifying things like when the machine is unloading, what the waiting time is with a full tank and how long it’s spent turning on the headland, managers can identify where changes can be made.”

All this might make some UK combine drivers feel they are working under something of a magnifying glass. But by their very nature such systems tend to be used by the biggest and most technologically advanced farms, which generally have highly competent drivers who are unlikely to worry if they’re being monitored.

Having said that, this close monitoring can be a great way of showing where things can maybe be improved. Turning time, for instance, typically accounts for 8-12% of combine running time in the UK. But in eastern Europe, with its larger fields, the figure can be as low as 6% or as high as 18%.

“People tend to combine the way they always have,” says Mr Miller, “but telematics has opened a lot of customers’ eyes as to how they can make things better. Turning time is one such example.”

Telematics can also help on the servicing front. “Service engineers will be able to access the combine’s information system remotely, if the driver accepts their request to gain access. This means they can identify the problem before visiting the combine in the field.

All dealers have access to each combine’s data as part of the package, and maintenance service tasks like oil changes, service interval dates and breakdowns are flagged up both to the operator and the dealer.

Telematics can even help the technician’s van find a broken-down van. “It can be difficult for an engineer to get out to a specific field, but service managers are able to print out the exact location using the Google maps option.”

Last season, Claas had 58 customers in the UK using telematics and its so-called combine league allows operators to see how they’re performing against other machines. They can choose which settings they want to compare, for example average throughput and max throughput.

Want to see what it’s like? Visit the Claas demo site.

Although Deere has had a relatively basic JDLink telematics system for some while, this year will see the launch of two new packages that offer a broadly similar capability to Claas. Called JDLink Select and JDLink Ultimate, they will use high-tech sensors to collect data and use the mobile phone network to send it back to the farm office.

Interestingly, though, Deere targets this technology at tractors and self-propelled forager operators rather than combines.

Designed not just for John Deere machinery, the more basic JDLink Select will be able to go on any make of machine fitted with power, earth and a 12V socket, says Mr James. “It’s a perfect entry level system for those wanting to try telematics, especially hire fleets and larger operators wanting to analyse machine utilisation.” 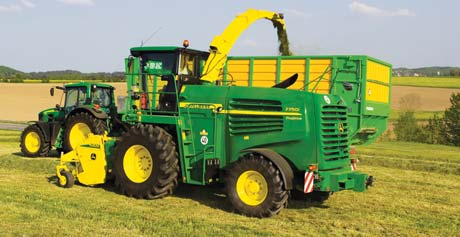 Deere is aiming its JDLink telematics technology at tractors and foragers

The technology is particularly popular for eastern Europe. Here, GPS positioning and fuel sensors mean managers and owners can keep an eye on where their machines are and if they are working or not.

On top of this, there’s an interesting security option. The farmer can set what’s called a GPS fence or geofence, meaning that if the machine moves outside a set of boundary co-ordinates, the owner will be automatically alerted

The more sophisticated JDLink Ultimate will use the same box, but send more detailed information via a server back to the office.

It provides detailed engine information and offers managers the chance to know whether a machine is working, in transport or idle. Engine load, speed, forward speed and average fuel rate all help in identifying where savings can be made. 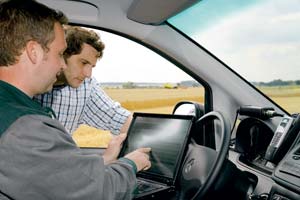 If there’s a breakdown, remote diagnostics enables dealers to receive a text detailing the error code, meaning they will be able to check they have the right parts or expertise before sending someone out.

“Hopefully, this will provide higher levels of support, as the dealer will know at the same time as you if something has gone wrong.”

Managers and owners can also set alarms, for instance if idle time exceeds 15mins, the tractor runs at 2300rpm for longer than 20 minutes or if fuel level falls below 15%, he adds. “These can be set to anything, for example if cooling levels are too low, and notifications can be sent via email or text,” says Mr James. “Using the information telematics gathers can improve efficiency, prevent misuse and provide a better picture of how a machine is being used, particularly if you use the benchmarking tool to assess where savings can be made. It also allows better dealer and service support and monitors for both fuel and machine theft.”

For Geoff Hayes (left in picture), arable manager at Maurice Mason Farms near Fincham in Norfolk, having telematics on their Lexion 600 has not only improved efficiency, but also encouraged them to adopt other high-tech GPS technology.
Harvesting nearly 1900ha (4700 acres), with field sizes varying from just 2 acres to 280 and over a distance of nearly 45 miles, logistics can be challenging during harvest.
They’ve now done three seasons with telematics on the Lexion 600, which they run alongside a Lexion 580. “It was sold to us as a method of solving problems that may arise, but to be honest we didn’t fully understand what we were getting on the day,” he says.
“We wouldn’t be without it now. Proportionally, compared to the cost of the combine, the cost was negligible.”
Mr Hayes logs on first thing in the morning and last thing at night during harvest to see how the combine has performed. “From the desktop I’m able to see what is happening at any particular point in time on the combine what the fuel levels are, where it is in the field, if it’s working, unloading on the move or stopped.
“We have changed certain parts of our operation because the system highlighted where time savings could be made,” he adds. “We’ll open a field up in a slightly different way now, work in bouts and make the route to the gateway as short as possible.
“We always try to unload towards an exit, half way down a bout and 2-3 minutes or 40m earlier, so that the combine keeps moving.”
This approach has enable Mr Hayes to improve the proportion of time the combine is actually cutting from 71% to 80%, equating to an extra 12 hours of combining.
“I am not able to be with the combine every hour of the day and the combine drivers know far more about them than me.
“But now I get a report emailed to me each day and if there are any issues highlighted, then I can talk to the drivers to see if there have been any problems we can solve.”
Because fuel level is constantly monitored, Mr Hayes is able to fit refuelling into a routine schedule alongside the cultivation tractors.
“We have also looked at the basic settings and compared them to those in the combine league, as there’s always going to be someone experiencing similar issues.”