Clobbering the back of your combine harvester against an oak tree or backing over the boss’s pickup is no fun whatsoever.

So the addition of a rear-view camera to keep tabs on what’s going on behind you can be no bad thing.

Traditionally, those wanting the reassurance of one of these cameras have shunned the wireless versions – fearing they would suffer terrible interference problems – and plumped for a simple wired version.

However, according to manufacturers these signal problems were limited to old analogue versions, and the current digital units will perform just as well as a wired camera.

To test that theory, we got hold of four digital wireless cameras ranging from less than £50 to almost £280 and put them to the test against a high-end wired version.

A combine harvester is arguably one of the most challenging environments for one of these cameras, so we fitted each unit on our John Deere 2256 combine during this year’s harvest.

As well as using the units as a rear-view camera on the combine, we positioned some on the tank and put the screen in the tractor to assist with unloading on the move.

Before getting into the test itself, it’s worth noting that most of these cameras are only wireless in the sense that they send the signal between the camera and screen wirelessly. That means the screen needs a power source in the cab and the camera needs a separate one at the rear.

Our combine didn’t have a cigarette-lighter socket in the cab so we hard-wired each unit to an ignition-switched 12V supply. In our case this came from the interior light and we fitted an in-line fuse to protect it from overload.

At the rear we took the camera’s supply from a beacon socket and ran two-core cabling to the site of the camera. To some that might sound just as much work as installing a wired version, but it did avoid a lot of hassle getting the cable out of the cab and around the grain tank and engine bay. 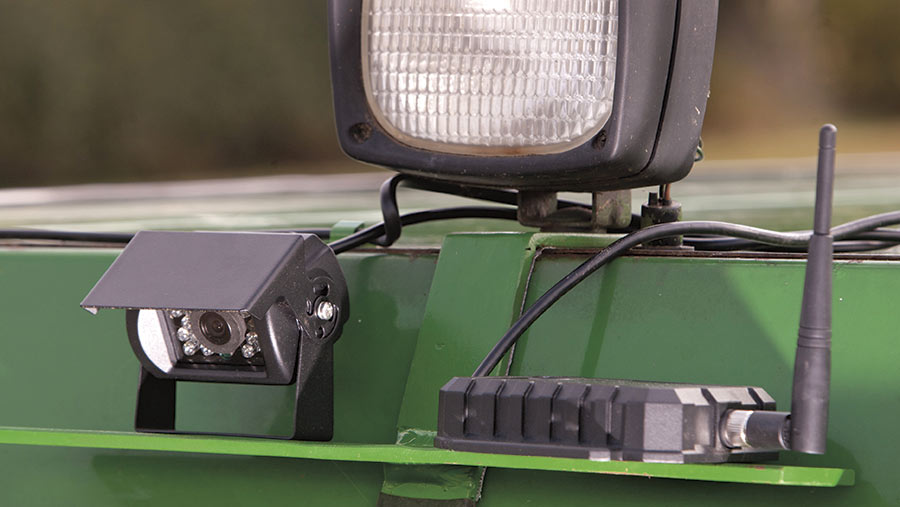 Reversing Cameras UK takes a slightly different approach to the other cameras on test by using a wireless “bridge” instead of built-in wireless technology in the camera and screen.

This means there’s a lot more wiring involved, but the flip side is that you have some scope to play around with aerial locations to get a better signal.

We had no problems with the signal wherever we placed the transmitters and receivers and the two came pre-paired so that we just had to connect them to the power source.

The HDW71 had the best image quality on test (by a small margin) and was about on par with our wired benchmark camera. Even so, there was still some graininess to the image.

Interference was never a problem and the colour definition was good. Two cameras can be hooked up to the screen and there’s a mirroring function to reverse the image. This was also the only camera to have the option of setting up reversing distance indicators. 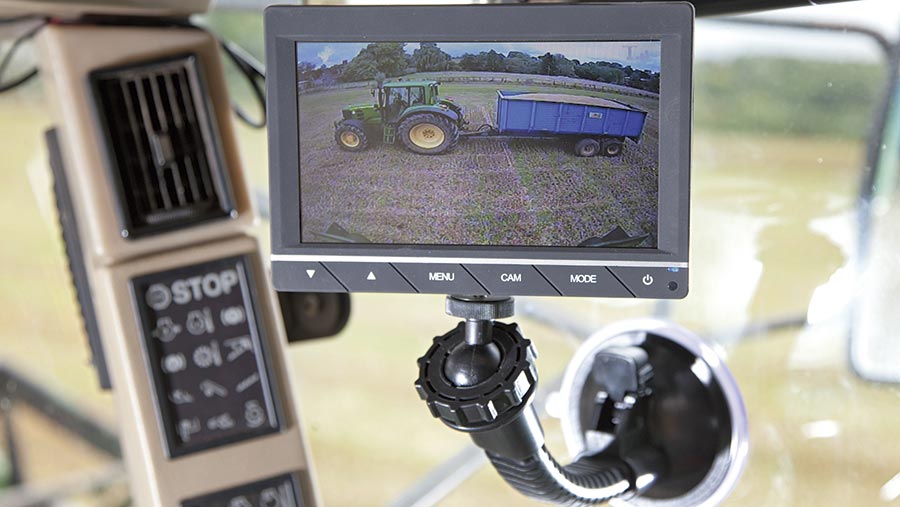 This was the most involved system to install with several wires to tuck out of the way and some head scratching working out where to locate the receiver in the cab.

The fact it only comes with a screw-on mounting bracket means it’s really only intended for permanent installation. For a combine this means it doesn’t offer a huge time saving over a fully wired system, but it would be useful for fitting in a tractor pulling a chaser bin, with the camera mounted on the combine tank or spout.

With its soft-touch casing and positive touch buttons, the HDW71 had the best build quality of the lot. The weatherproof transmitter and receivers also sit in a metal case and look like they will stand the test of time.

Best for: Moving between machines 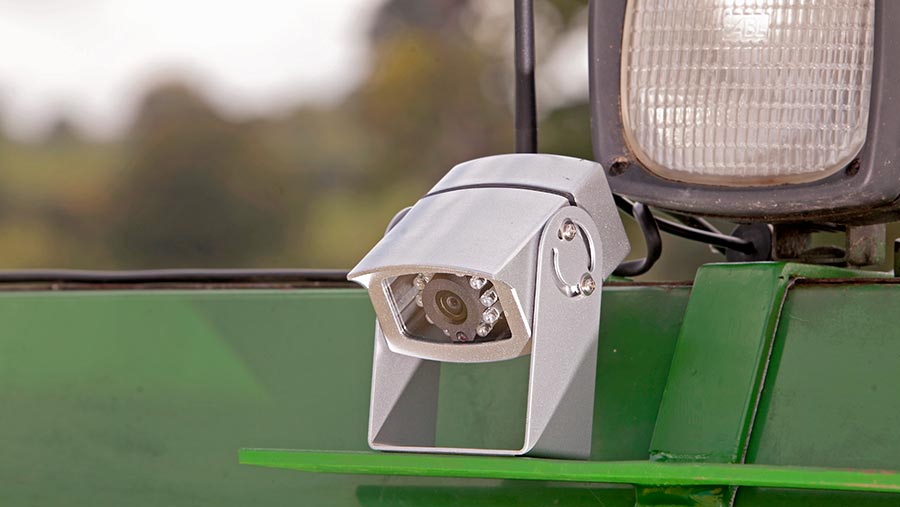 This was the only truly wireless setup on test with a battery-powered screen and separate power pack for the camera. However, the battery pack was a separate unit from a company called Luda – which also makes a wireless camera – and we had to botch the wiring slightly to get them to fit together.

The signal never dropped out and when we had the screen in the tractor and the camera on the combine, we usually had to leave the field before it gave up the ghost.

This was the smallest screen on test, but the image was fairly clear and the size didn’t bother us too much as long as we mounted the screen close by.

It gives you the option of VGA and QVGA quality settings, but VGA provides by far the best image quality. The system also rarely suffered any interference.

The Digi-View was definitely the simplest unit to install. Because the screen is wireless and comes with a window suction mount you can stick it anywhere and it’s ready to go.

If it does run out of power it can be charged from the cigarette lighter. The camera and battery pack also came with magnets for instant mounting.

The unit itself feels a bit on the cheap side, but thankfully its performance belied that. It also has the same poor single-screw mounting point as its larger sibling, but for this size unit we found it adequate.

The instruction manual for the screen doesn’t offer a signal for a battery life, but we found it kept going for at least 10 hours. There’s also the option of plugging it into the cigarette lighter if it does go flat. Luda publishes a 12-hour life for the battery pack, which just about tallies with our experience.

The Digi-Max 2 has the same camera unit and technology as the Digi-View, but comes with a larger 7in screen that has to have a permanent power source. The camera itself can also be made fully wireless with the addition of a battery pack.

Although it has the same signal strength on paper as the Digi-View, which was excellent, this unit did drop the connection every now and again. Adding an aerial extension provided by Trailer Vision solved the problem, but we still needed to be a bit careful about where we positioned the monitor in the cab.

The picture on the screen was perfectly adequate, but it was a little on the grey side and it only offered brightness adjustment with no options to tweak contrast or colour. There was also no mirroring function.

However, it does support up to four different cameras, which can be displayed in a quad-screen format or set to scan between the cameras automatically. There’s also a remote control, which is handy if the monitor is mounted far away. 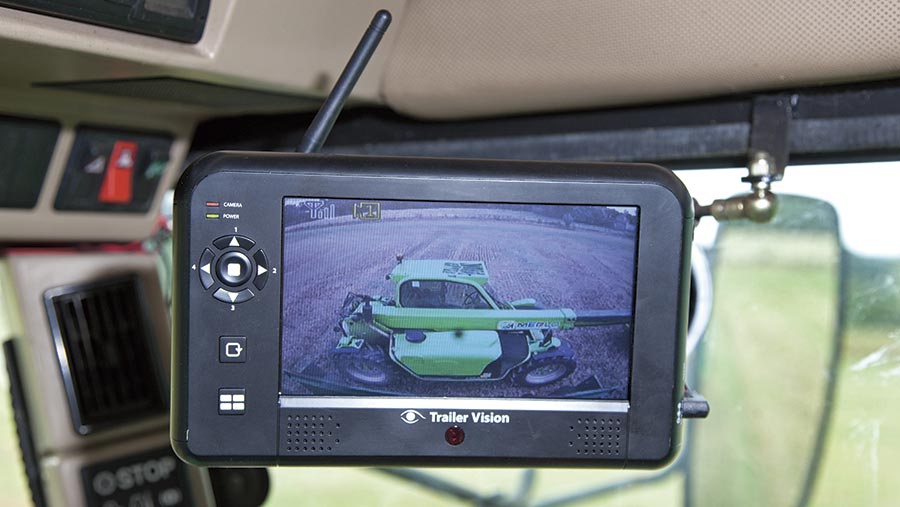 Installation was pretty straightforward, with cables supplied to wire both the camera and screen to a 12V supply. The screen also came with a cigarette-lighter socket.

The shell is made out of fairly cheap plastic, but the screen is fairly good quality. However, the mounting point for the supplied suction mount is poor.

This caused the screen to wobble and eventually the pressed-in metal treads started to pull out of the plastic. If we purchased this screen we’d opt for a tablet-style mount that grips around the case.

Price: £250 for the Digi-Max2 screen and camera 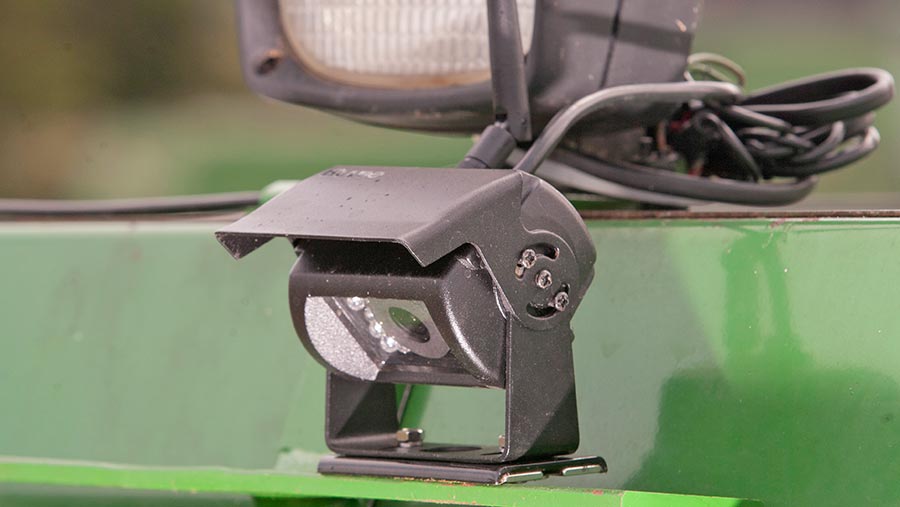 To see if the budget end of the market could deliver we took to Ebay and purchased a Buyee wireless camera, which said it was suitable for use with buses and trucks. On paper it had similar specs to some of the cameras, but sadly it didn’t deliver.

We had high hopes for the Buyee, but unfortunately the signal strength was terrible. That meant it rarely managed to produce an image when the camera was mounted on the combine’s rear hood.

The only time it did work was when parked in the yard, presumably as the signal had more surfaces to bounce off. If the camera was kept in full view of the screen its performance was considerably better, but still far from perfect.

When we did have a signal the image on the screen wasn’t that far off the others on test. The 7in screen also seems to be decent quality with a mirroring function built in, plenty of colour and brightness adjustment and a remote control.

Thankfully the camera comes with the option of adding an RCA wired connection between the camera and screen, which takes away the poor signal performance. With that in mind, Buyee’s similarly priced wired camera could be a good buy. 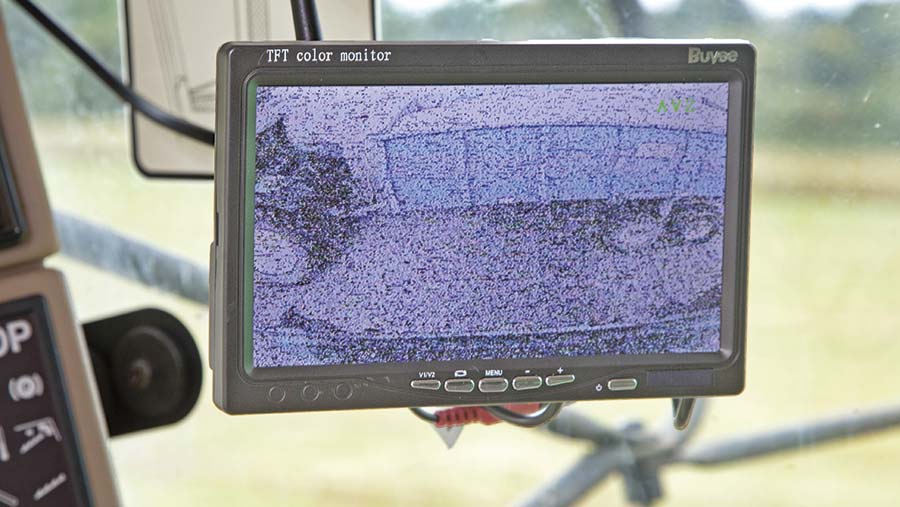 The Buyee kit is really neat with minimal wires to deal with. The mounting bracket provided was a little on the cheap side, but held the camera fairly securely. This was a permanent fixture, though, needing to be screwed or stuck to a surface.

The Buyee camera was surprisingly well made considering the price, but sadly the wireless internals were not up to the job.

To lay down a benchmark for our wireless units, Trailer Vision supplied us with its high-end W7 monitor and wired CM-220 camera.

This setup only required the screen to be powered, but we had to run the cable out of the cab and all the way to the camera mounting point at the rear. It also made it impossible to mount in the tractor for assisting with unloading on the move.

The image from the neat stainless steel camera was good quality, but it wasn’t noticeably better than Reversing Cameras UK’s wireless offering.

As you only need to provide power to the screen, the electrical part of the installation is pretty simple. However, routing the cable out of the cab and all the way down the length of the combine takes a while, particularly if you want it to look neat.

Build quality was good, but then it should be for its £450 price tag. The touch buttons on the bottom of the screen were a bit tedious though and we found the navigation of the menus a little unintuitive.

So are wireless cameras any good?

If you’re willing to spend £200 or more, then yes they are. For that budget you’ll get a system that has a strong signal and can happily be mounted on the back of a combine without suffering any interference.

However, if your budget is more like £50 the performance of our Ebay purchase suggests you should give wireless a wide berth.

So would we buy one? For a permanent combine installation we’d probably save a few pennies and put the effort in to installing a wired camera. But if we wanted to move the units around or run them on a tractor and trailer/chaser bin then we’d stump up the cash for a wireless system.

It’s also worth mentioning that the quality of the image from all of these systems is lower than you might expect, given the quality of smartphone cameras these days.

That could be partly due to the fact wireless cameras need to compress the image before it’s sent to the screen, but we were surprised the £450 wired one wasn’t sharper.

However, all apart from the Buyee are perfectly adequate for their intended task of preventing you staving-in your combine or dumping half a tonne of wheat on the deck.