As rain and lack of sunshine continue to prolong 2008’s grim harvest, many farmers are having to combine crops at far higher moisture contents than usual, as well as risk damage to combines by trying to deal with badly-laid crops.

So how do you minimise damage to machinery in such conditions? Ewan Crocker, Deere’s crop systems specialist says it’s possible to harvest at high moisture contents but the limiting factor is the amount of laid crop and weeds and sprouted grain.

“Forward speed will largely depend on travelling conditions, and at the moment growers are experiencing a lot of weed in the bottom of the crop, which slows things down. There’s also a danger of getting stuck, so speed will depend on traction.” 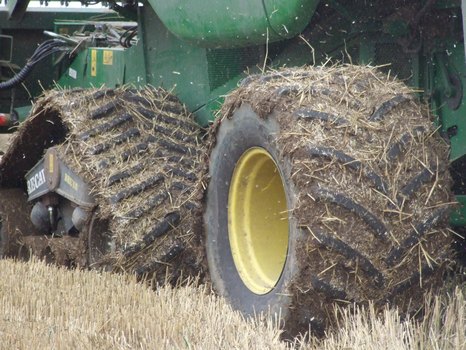 He advises fitting dual wheels to the front, but says farmers should contact the dealer beforehand. “The wider the wheels, the more strain on the axles. It’s essential to know which tyres will fit each model.”

Edward Miller at Claas says obvious points on combine set-up can easily be forgotten in a wet harvest.

“For wet and laid crops, it’s even more important to get a good cut and feed into the combine, so check knives and fingers regularly and pay close attention to the knife-to-finger gap,” he says. 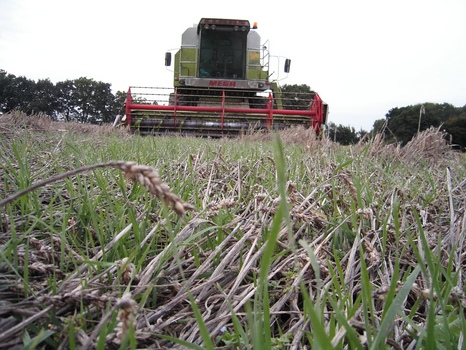 He also suggests raising the skids to their highest position to reduce the amount of soil sticking to the underside of the cutterbar.

“Don’t have the cutterbar too low in laid crops. You only need to place the point of the lifter on the ground – if you go too low the lifter will lift and hold the crop down.” It’s also vital to empty the stone trap daily.

As wet grain passes through the concave, the preparation pan will become dirty and less effective, giving a dirtier sample, he warns. “In wetter conditions, it is even more important to keep cleaner samples, as you then waste less fuel when drying and separating chaff.”

To ease the strain on the unloading auger, reduce the flow by shutting down the slides on both cross augers in the grain tank. “Remember, dealing with wet and dirty grain means dirt will build up in the turret auger, so make sure this is cleaned regularly,” he adds.

“A shear-bolt going on the unloading drive is often the first sign that either the slides in the tank are too high or there is too much dirt in the system.”

“In a stop-start harvest, it’s easy to miss daily checks as you may only combine for a few hours at a time. By taking steps to ensure the combine is as clean as feasibly possible, it will give you the opportunity to spot any problems.”

Finally, if you get stuck, try to dig out a ramp before attempting to tow the combine out. “Although the towing eyes are usually on the front axle, pulling the combine out this way may not be practical. To tow it out backwards, wrap a chain round the rear axle pivot point and avoid pulling on the axle itself or the rear trailer hitch.”