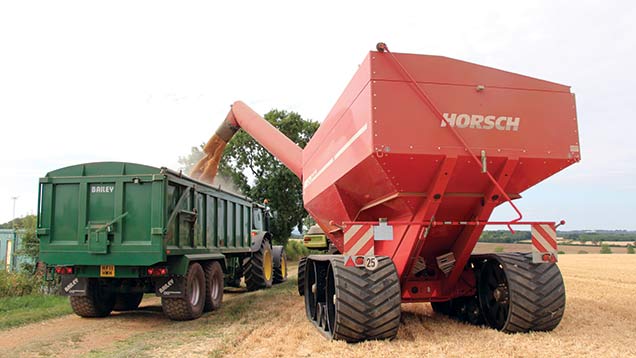 Controlled traffic farming isn’t something you can adopt in one year, or indeed several. It takes time, patience and to a certain degree, money to implement even in its simplest form.

For one Northamptonshire farm manager, it has driven machinery investment and rotation plans for the last three years, ever since he took over managing Courteenhall Farms.

One of the first steps was to introduce an RTK network to enable the farm to put down permanent tramlines, explains manager Tom Banks. “Before, the estate used a basic Egnos-derived GPS signal, and only on the Caterpillar Challenger 855 crawler.”

The whole farm has also been Soyl mapped over the last couple of years, allowing for variable seed rates and fertiliser application, under guidance from Jon Yeoman from Frontier. Last year, the farm invested in a 12m Horsch Sprinter seed and fertiliser tine drill, as well as a 12m Joker disc harrow.

“We looked at the different widths to go with for CTF and 12m seemed the natural choice. For the 1,200ha we have it gives us extra capacity, but we’re hungry for more land, and we reckon we can comfortably farm 2,000ha with the kit we have, with just the addition of another combine and a larger sprayer,” explains Mr Banks.

After combining, all land is covered with a 12m Joker and rolled to establish an initial stale seedbed.

If time allows there will be another pass with the cultivator and an application of Glyphosate with a 24m Bateman RB26. “If weather conditions dictate, there’s a pass with a 12m Vaderstad NZ before drilling, otherwise in dry conditions we just drill into the stale seedbed created with the Joker.

“Having the extra capacity also means we have the confidence to delay planting winter wheat, achieving better flushes of blackgrass and still be timely with planting. Blackgrass is becoming a real problem in this area, but with the new cultivation method and capacity to delay planting we have seen great results, together with a new rotation and improved drainage.”

The farm’s Claas Lexion 770 TT is equipped with an auger extension to work with the 12m widths designed by Horsch and an option offered by Claas. It’s one of only two in the country currently. “It was a case of if it didn’t have the extension I wouldn’t be having it, so sure enough, Claas agreed.”

The next step, after the combine, was to consider grain handling off the field and a chaser bin was the obvious choice, allowing traffic to be kept to a minimum and to our dedicated track width, also giving us the option to load lorries straight from the field and cut down on double handling.

The Titan UW has been specifically designed for the UK market, according to Horsch. There were two key requirements for British farmers: for it to have the capacity to hold a full lorry load of grain, and be capable of loading a lorry in 90 seconds.

With a hopper capacity of 34cu m, the Titan can hold around 28t of good, heavy wheat, he goes on to add. A telescopic axle extends from 3m to 3.56m, if the chaser is on wheels.

The track units, which are made by Canadian company Elmer, feature Camoplast rubber with a novel lug pattern that is designed to deliver both durability and flotation evenly to the ground. The low-profile lug pattern also provides a quieter ride with less vibration, says the company.

There are a few Titan chasers working around the UK, but shod with flotation tyres, not tracks.

There are a few Titan chasers working around the UK, but shod with flotation tyres, not tracks. “Using the same trackways for all passes means we have to do what we can to conserve them, so tracks were a no-brainer for us,” Mr Banks explains.

According to Elmer, its Transfer Track system offers three times more flotation than 900/60/R32 high flotation wheels, not only reducing compaction, but also reducing the chances of getting stuck with such a heavy load.

A 340hp Claas Challenger 75E is hired in for the season to pull the chaser bin. It has a full unloading height of 4.6m, while there are two viewing windows, working lights and cameras to make it as easy as possible for the operator to load and unload.

They also feature pivoting mid-rollers for travel over uneven ground, as well as hydraulic tensioning and 117cm (46 inch) diameter wheels, which Elmer says make them capable of higher capacity and transport speeds. They are tensioned by an independently-charged hydraulic-over-nitrogen gas accumulator.

“Although we store the bulk of crops on farm, we also have 1,700t at Camgrain. Our stores are a little dilapidated, so we are undecided about what to do long-term, whether to invest in new stores or source more off-site storage.”

Mr Banks aims to put a stop to hauling grain with tractors and trailers altogether in the near future, hence the investment in the Titan.