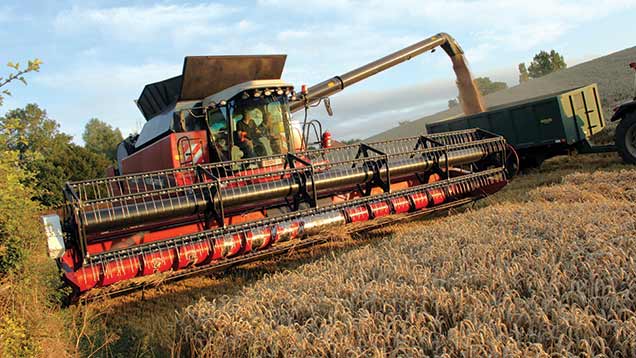 Versatile is a well-known name in the world of articulated prairie monsters and its recently launched four-track crawler has reignited UK interest in the brand.

The Canadian maker’s machines have been offered here at various times over recent decades under Fiat, Ford and New Holland badging.

Since the brand and Winnipeg factory were sold off as part of the CNH merger deal, the machines have been more recently marketed under its own name through importer JPM Agricultural.

With a number of those units successfully sold, JPM has decided to expand its product offering with some of the other machines sold by Versatile in North America.

These include a line of conventional 260/290/310hp tractors – a successor to the old New Holland 70-series design – and a rotary combine with some unusual features.

While it wears Versatile badging, the RT490 single-rotor machine is actually made by its Russian parent firm Rostselmash, which sells combines in Germany and some eastern Europe countries.

Despite that, the harvesting machinery specialist reckons it’s one of the world’s five largest makers of farm equipment, and in 2008 bought a majority share in Versatile from Canadian businessman John Buhler, the original buyer when it was put up for sale by New Holland.

To the line of conventional and articulated tractors it inherited, it subsequently added the Torum rotary combine from its Rostov-on-Don factory, rebranding it under the more familiar name and colours of Versatile as the RT490.

That is how JPM happens to now have access not only to a full line of arable tractors from 260-550hp, but also a high-output harvester.

The company brought over one RT490 for harvest 2015, and has been trialling the combine in UK conditions and demonstrating it to farmers local to its mid-Lincolnshire base.

Managing director James Hunt believes there is a gap and a potential market for a high-output-yet- simple machine.

“With a 490hp Cummins six-cylinder engine and 10,500-litre grain tank, plus headers up to 9m [30ft], we think the RT490 could well suit the 200-600ha farm, perhaps looking to retain or regain combine independence, rather than using a contractor or buying a potentially unreliable or costly to run/repair used machine,” says Mr Hunt.

A different kind of combine

There are two particularly unusual features of the RT490 combine. First, the feeder house features a series of beaters rather than a chain/slat conveyor to convey crop into the rotor.

Meanwhile the concave completely surrounds the rotor and spins in the opposite direction to it at 8rpm.

This supposedly threshes the ears three times in each rotation, a process that is said to up output and give a cleaner sample.

“Having sold and proved we can support Delta-Tracks, we want to do the same with the RT490 – and with the 260/290/310hp conventional tractors – and we believe there are farms where the combine would fit well,” says Mr Hunt.

“Price will be around £160,000, considerably less than comparable new or even young used machines of similar capacity.”