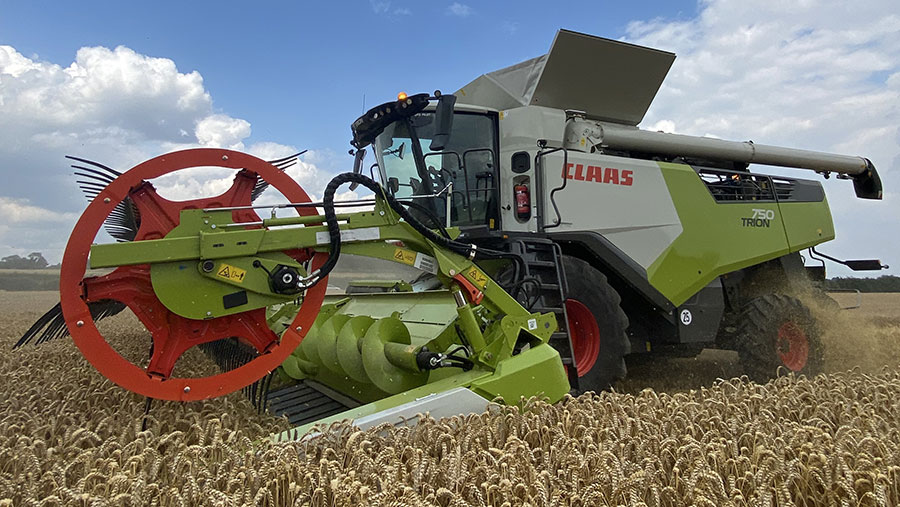 Buyers will no longer have to order a model from Claas’ biggest Lexion range to spec all the popular bells and whistles after the German maker launched its new ultra-flexible Trion series.

The new arrivals complete a thorough overhaul of the firm’s grain harvesting offering, which started in 2019 when the Lexion 700s were ushered out and replaced by new 7000 and 8000 models.

This was swiftly followed by the high-spec Lexion 5000 and 6000 straw walker machines, which superseded the 600-series. Of its long-standing models, only the baby Avero 200-series and the Tucanos were left.

However, both will be discontinued following the launch of the Trion, although the Tucano 320 – the smallest in that range – will be available for one more year.

Claas will be offering 20 variations on the Trion theme (see “Claas Trion combine range below”) as it hopes to cater for a wide range of farm businesses, from a small mixed unit in Cornwall to a large-scale arable specialist in the East.

The 520 comes as a standard wheeled machine, but the 530 can also be had in Montana spec with hillside compensation, or with Claas’ Terratrac system.

The wide-body 640, 650 and 660 six-walker machines offer another step up in power and output, ranging from 306 to 408hp, with Montana and Terratrac options available on the top two in the pack.

Completing the Trion fleet are three narrow-bodied hybrid 700s, including the single-rotor 720 and 730 and the twin-rotor 750, which tops out at 435hp.

All models are now powered by a new British-built six-cylinder 6.7- or 8.9-litre Stage 5 Cummins engine, which comes with “Dynamic Power” as standard. This reduces power output when not under load (when not using the chopper or unloading, for example), which Claas says has the potential to cut fuel use by about 10%.

Combine enthusiasts will recognise the components of the APS system in the Trion range, with Claas essentially resurrecting the setup used on 2018 600- and 700-series Lexions.

This comprises a 450mm accelerator and 600mm drum, which is 33% larger than the 450mm drum on the discontinued Tucano. The result is a greater concave area, which on the 600 models is 31% larger than a Tucano 450; 700-series machines are about 9% bigger than the largest Tucano, the 580.

The front concaves are interchangeable, which will be useful for northern growers in chewy conditions, or for those harvesting alternative crops – increasingly common as farms look to diversify rotations.

Drive to the threshing system has been simplified too, and mirrors the configuration of the new Lexion models, which were inspired by the Jaguar forager. Operators will also notice six fewer belts on the hybrid models and three less on the walker versions compared with the outgoing Tucanos.

The walker machines in the 500 and 600 ranges have Claas’ Multifinger Separation System (MSS), which fluffs the stream of straw ahead of the 4.4m-long four-step walker racks for greater separation efficiency, especially in difficult conditions.

The total separation area for the 500 and 600 models is 6.25sq m and 7.48sq m, respectively, which again is a significant step up on any Tucano and larger than other comparable machines on the market.

For the single-rotor 720 and 730 hybrids, crop is shifted through a 4.2m-long, 570mm-diameter arrangement with six grates, and the largest Trion 750 has two 4.2m-long, 445mm-diameter rotors with five grates.

New to this size of combine is hydraulic adjustment of the four rotor flap “bomb doors”, and rotor speed is infinitely adjusted independently of the APS system from the Cebis control unit.

Another feature taken from larger machines is Claas’ Jet Stream cleaning system, which uses six or eight turbine fans, while 500 and 600 Trion models have the option of 3D levelling on the sieves.

There is also a 4D option on 700 models – a system that’s been on Lexions for some time and sees the machine automatically adjust rotor cover plates to even out sieve loading on slopes.

Other operator aids on the separation system include Auto Slope fan speed adjustment, Cruise Pilot and Auto Crop Flow. There is also the choice of a basic Cemos Dialog or performance-optimising Cemos Automatic operator assistance. 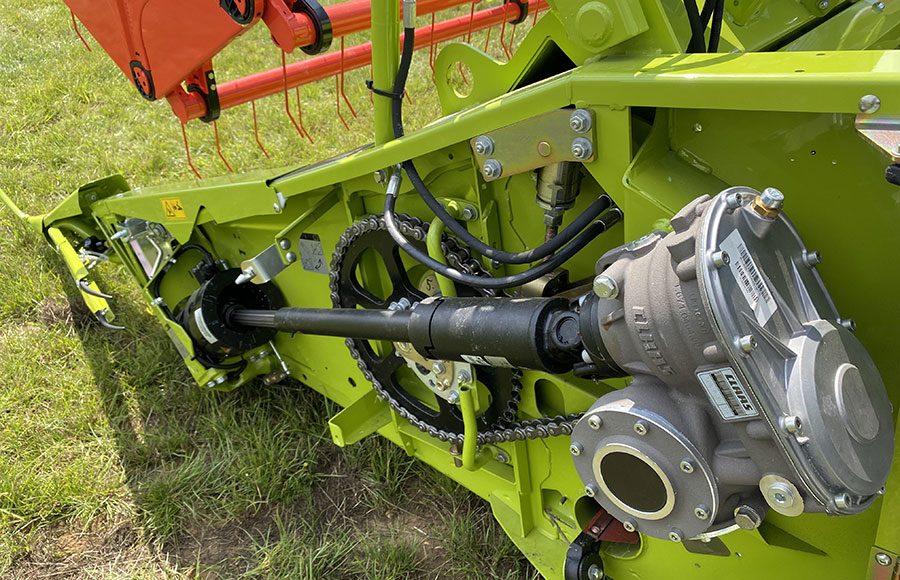 The Trion offers grain tank sizes that are a little larger than the Tucano and other equivalent mid-size machines, with the 520 fitted with an 8,000-litre hold and up to 12,000 litres available in the satellite-style tank on the 750.

When unloading, operators will notice some improved visibility, as the 90-130-litres/min augers now swing through 105deg. There is also the option of a pivoting spout – handy for when working across slopes or filling larger trailers or chaser bins.

Cutterbar options are extensive, with Trion customers able to pick from the full range of Cerio and Vario ranges of auger tables, plus the Convio and Convio Flex draper fronts, in widths up to 12m.

To the rear, there is also chopper choice aplenty, with anything from a standard mechanically controlled unit to the most advanced electronically managed radial power spreader system with wind-compensating deflectors available.

Operator comfort now mirrors much of the Lexion range, with a new cab design offering more head- and legroom for the size of combine, and a larger windscreen and narrower pillars that give decent visibility over the cutterbar.

A 12in Cebis touchscreen colour monitor lets the operator control all functions (buttons are also on the armrest) and accommodates the Cemos Dialog and Cemos Automatic systems where selected as an option. 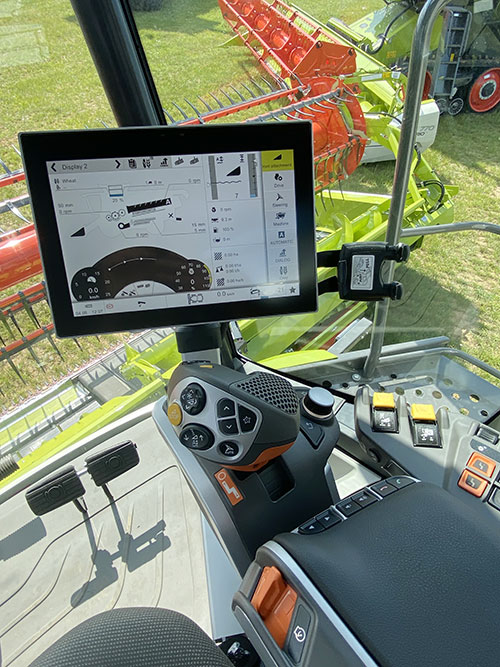 With a design and build based on focus group feedback, some customers clearly wanted the ability to spec up small to mid-sized machines to the equivalent of the Lexions at the top of the tree.

That is now possible with the myriad options in the Trion range.

Claas suggests that more arable units and contractors are discussing moving back to two mid-sized machines instead of one top-spec £500,000 monster, so the Trion could fit the bill at the right price.

That said, the company was typically tight-lipped on how much the Trion models might cost, but like the power and output stats, it will be pitched somewhere between the outgoing Tucano and the flagship Lexions.