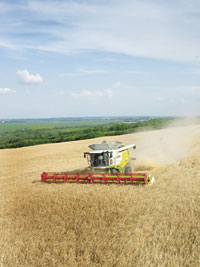 Claas has added two new model ranges to the Lexion combine line-up. While the only visual differences on the new 600 and 700 series combines are the new high-spec cab (shared with their Xerion tractor and Jaguar forager siblings) there are several key changes under the panels making them more productive, faster and more efficient, according to the German giant.

The 700 series adopts the Claas APS primary threshing system with grain separation carried out by the Roto Plus twin rotor arrangement, known as APS Hybrid. The Lexion 600 straw walker machines use the same APS technology, this time with grain separation via five- or six-straw walkers. A new hydraulic set-up, shared with the Jaguar range, results in 50% faster overall cycle times says Claas, thanks to a constant pressure load-sensing system. Working pressure has increased from 180 to 200 bar while pump size has increased by 50% to 120 litres/min.

Both 760 and 770 Lexions use 8-cylinder, 16-litre Mercedes engines, while other models in the 600 and 700 series use 6-cylinder Caterpillar blocks. And, while these engines have been tweaked to give more hp, rated engine speed is up to 400rpm lower, reducing overall fuel consumption.

The armrest is home to the familiar multi-function lever which controls ground speed and direction, cutterbar height, unloading and reel operation as usual. However, both ranges use Claas’s new Efficient Agriculture Systems (EASY) feature which coordinates all on-board settings as well as steering and monitoring functions.


The CEBIS control system now comes with an 8.5in colour screen and can store up to 20 different crop settings, while a new feature on the larger 700s is the CEMOS system. Located on a separate, inter-changeable display that can also be used to control applictions like the GPS Pilot steering system, CEMOS provides the operator with a step-by-step interactive guide which gives suggestions on how to tweak settings to get the most out of the machine.


On the larger 670, 750, 760 and 770 machines there’s also a new Cruise Pilot II system which monitors the crop throughput, engine load and grain loss to make sure productivity is maintained.

Fuel tank capacity has been increased, too, as well as grain tank size on the six-straw walker machines and electronics are now housed in the cab, instead of outside, resulting in better protection.

The wider cab gains 20% more glass for better visibility, a larger grain tank window and a new, air-suspended seat that reduces vibrations by a claimed 40%, while a luxury passenger seat now houses a handy refrigerated compartment.

Top speeds have been increased as standard to 30kph on 770, 760, 750 and 670 models, while the new generation of Terra Trac has the option of being supplied with a 40kph transmission, making it the fastest combine currently on the market. The Lexion 750 TT’s transport width is 3.3m. This new generation of Terra Tracs, available on the 700 series and the 670 Lexion, feature independent hydro-pneumatic suspension and spring-mounted support rollers, which reduce vibration both on and off road by 30%.

Thanks to a new axle, the Lexion Montana hillside model, available in 630, 670 and 750 models, manages to maintain the same performance on hilly terrain as it does on level ground. This new axle allows the wheels to adapt to the ground contours by adjusting the portals with hydraulic cylinders. The chassis then compensates for side slopes of up to 17% and longitudinal levelling up to 6%. These new models also get beefier hydraulics and a 3-D cleaning system.

A 10.5m header has also been added to the Claas offering, following the introduction of the 12m wide version launched last year. The Vario 1050, like its 1200 stablemate, has a split reel and cross auger, alongside a divided knife bar. The cross auger has increased in size to 660mm and a clever anti-wrapping guard systems prevents blockages.

Power is transferred via a synchronised gearbox at either end of the header, while instead of belts and chains telescopic drive shafts are used instead. The knife can be moved in by 10cm or pushed out by 20cm for cereals and, by fitting filling plates, can be extended by an additional 30cm for direct cutting OSR.

• Farmers Weekly will be test driving the new Lexion 770 with Vario 1200 cutterbar in a couple of weeks time, as well as getting to grips with the new CEMOS system. And to have your say on the machines click here.