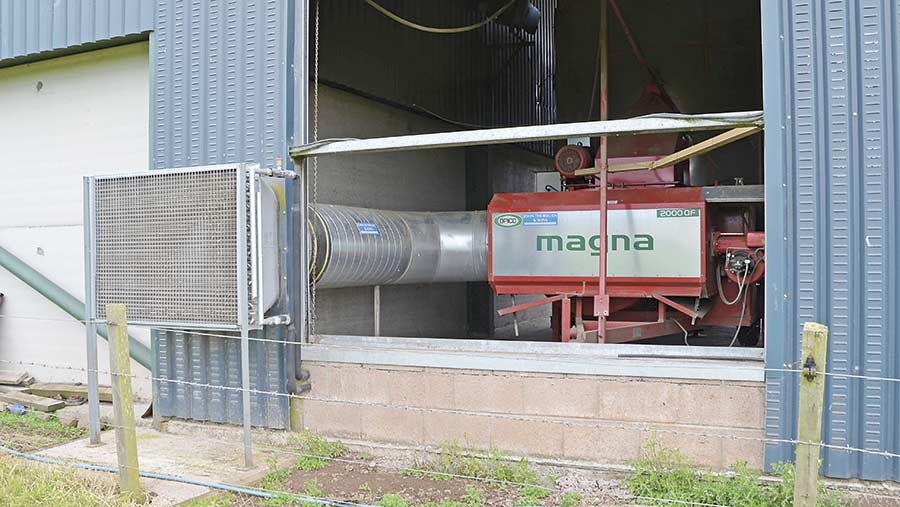 Weather conditions during harvest in the Scottish Borders are increasingly unpredictable – the only certainty being that virtually every tonne of grain will need to pass through a dryer. And that’s a costly process.

But more and more growers across the north of the UK are looking at ways of trimming those costs with all sorts of novel solutions using the latest state-of-the-art tech, common-sense and a bit of initiative.

With a wind turbine and two biomass boilers on their farms in the Scottish Borders, the Hodge family is familiar with renewable energy and the potential revenue it can generate.

But bringing in income through subsidies is only one side of the story – the bigger long-term opportunity lies in the savings to be made on energy bills, says Andrew Hodge.

See also: How to renovate a Master batch grain dryer

Staff: Andrew, Jill and Emma Hodge plus one other full-time and two part-timers at busy times

“Four years ago we installed a 90kW biomass burner here on the home farm to provide heat for the main farmhouse, office, workshop and bungalow,” he explains.

“At around £65,000 for the whole installation, it was a big chunk of cash to lay out, but we could see the savings we’d be making on our fuel bills and the income we’d be getting from the RHIs, so we took the long view and bit the bullet.

“There was only one problem: the system would only be working at capacity for about six or seven months of the year. When things warm up through the summer we don’t need the heat in the buildings.”

However, on the farm there was another big user of heat energy when everything else was running cool – the grain dryer.

At the time, the Hodges were using a gas-fired 12t Opico GT dryer, but with more arable acres it was struggling to match the capacity of the farm’s larger Claas Lexion 650 combine and it was due for a change.

Having had decent reliability from the Opico dryer and good back-up from local dealer John Thorburn just a couple of miles away, Mr Hodge was keen to stick with what he knew and ordered a 20t Opico Magna. A diesel-burner, it offered the flexibility for the next trick up Mr Hodge’s sleeve.

“I had a plan to site the new dryer in the building next to the biomass burner and rig up some sort of heat exchanger to warm the air going in.

“We had used Renew Green Energy from Galashiels to install a second woodchip boiler to heat the three houses at our other farm and they really knew their stuff, so we got them to design a system for the dryer.”

In simple terms, what is effectively a massive radiator is positioned just outside the grain drier shed.

Hot water from the system’s buffer tanks flows through it with electronic valves used to redirect the flow from the buildings’ circuit into the heat exchanger.

Connected by steel ducting to the intake, the dryer fan draws ambient air in through the radiator fins, bringing it up to about 50-55C, so the diesel burner is required to kick in much less often. 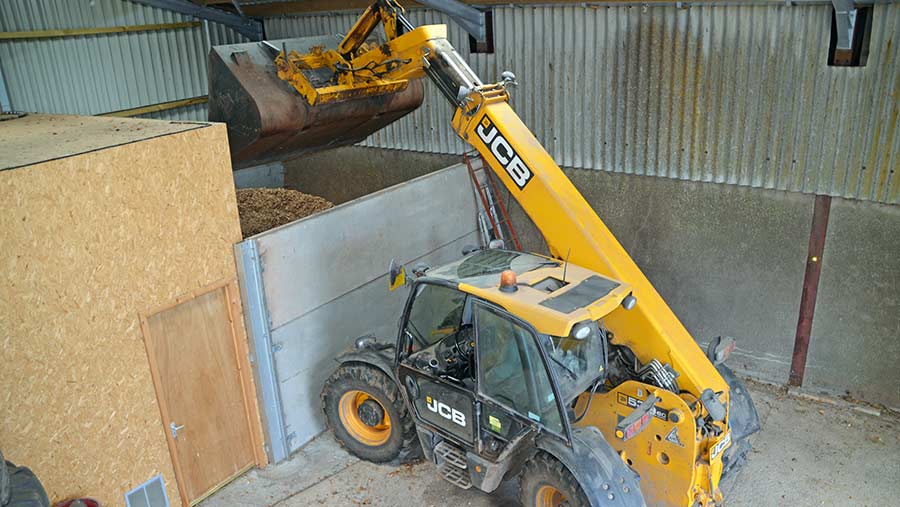 The beauty of the set-up is that the dryer itself is virtually unmodified. The computer controller prompts the burner to kick in on high flame as required and then to throttle back to low flame as it normally would (the only link between the dryer and boiler being a signal to shut off the water pump when the burner cuts out).

The key difference is that the burner now spends much more time on its low setting, with the biomass boiler providing the lion’s share of the background heat.

“With the dryer spending more of its time on low flame, we’re seeing a 20-30% saving on our diesel bill.

“With our quantity of grain to dry – about 3,000t/year – that’s well worth having. Together with the RHI payments it generates, that makes the £8,000 we spent on the set-up easy to justify.”

The only downside is that the dryer cooling cycle now takes longer than before because the intake air is still drawn through the heat exchanger for that phase of the operation.

Although water is not pumped through the radiator when the dryer goes into cool down mode, it takes a while for all the heat to dissipate out of the core. In reality it’s no problem – the burners just need to be shut down 10 minutes earlier than before.

Despite that, throughputs are pretty impressive – drawing out 6% moisture, the 20t Magna will deal with five batches in a 24-hour period. 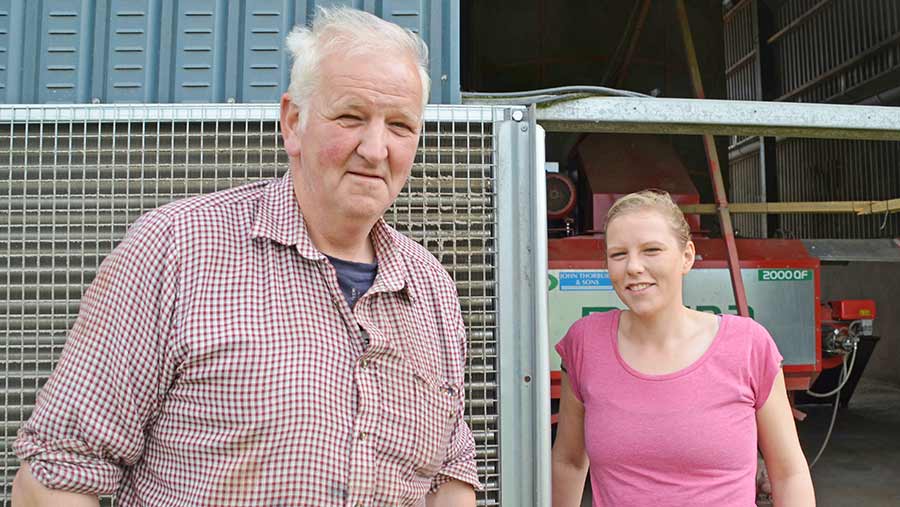 What about the feedstock?

For the last three seasons the business has bought in timber from a local woodland management company, stacking it up to dry for a year before having it chipped by a specialist contractor.

However, last winter the Hodges had some of the 60ha of woodland at Rulesmains Farm thinned out and now have a 10-year felling and replanting plan in place to provide a long-term supply of feedstock for the two biomass burners.

Each one has a large reception hopper capable of holding 8-9t of woodchip. Once dry it’s not dense at all – the load in a 14t grain trailer only weighs around 4t.

With the bigger boiler at the home farm running flat out, one hopper load will generally last three to four weeks.

Self-feeding, the burner chamber is stocked by a sweeper auger in the bottom of the bin that helps to avoid any issues with the material bridging and blocking.

“With our woodland and wind here in the Borders it makes sense to make use of the natural resources we have at our disposal,” says Mr Hodges.

“We had the biomass boiler sitting there doing very little through the summertime, so it made sense to make a relatively small investment to get it working for us drying grain.

“The next step is to look at ways of getting the other burner at our other farm paying its way year-round. Without grain storage on site, we’re thinking of converting a silage trailer with a mesh floor to dry woodchip.”