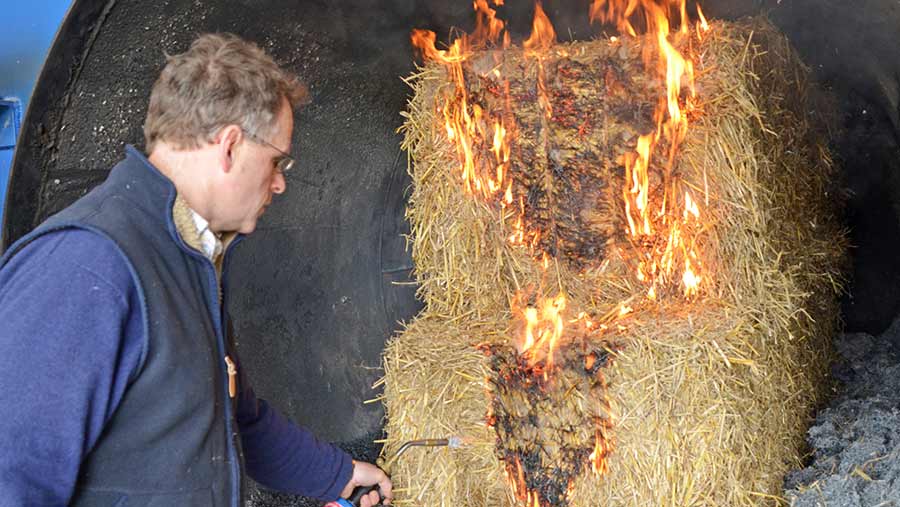 Arable growers in the West Country face a constant battle to harvest grain at an acceptable moisture, so having a decent drying set-up is essential – even if they’re expensive to purchase, fuel costs erode ever-decreasing margins.

But what if someone actually paid you to dry your grain? When it was introduced in late 2011, the government’s Renewable Heat Incentive (RHI) offered exactly that.

Savvy farmers keen to make the most of that opportunity jumped at the chance, but many were confounded by an almost complete absence of off-the-shelf, turn-key biomass dryers on the market.

In 2012, Robin Blatchford, a beef and arable producer on the Wiltshire-Dorset border, found himself in exactly that situation and set out to put together his own set-up.

“We found ourselves in the position where, to cope with our increasingly late, wet harvests, combines were getting bigger and bringing the corn in faster,” he explains.

“But the drying side of things got left behind. We had a 30-year-old Alvan Blanch continuous-flow dryer that didn’t stand a chance of keeping up with the combine, so inevitably we’d end up with heaps of wet grain backed up waiting to go into store.

“On top of that, operating the drier was a dusty job. I became sensitised to the dust and one year ended up getting quite ill as a result.

“I decided enough was enough and resolved to build a proper ventilated floor store with the ability to draw moisture out of wet grain. The hope was that it would be far easier to maintain and would mean less exposure to dust.”

Staff: Robin Blatchford plus one full-timer and one part-timer

Making the money stack up

Wanting to make the most of the opportunities that the RHI presented, Mr Blatchford looked into the options for biomass burners capable of doing the job as well as replacing the old oil-fired heating systems in the main farmhouse and a cottage in the yard.

He was also keen on the idea of using a home-grown fuel source to gain some control over the costs of farm energy bills.

Initially woodchip was the preferred fuel source, but it quickly became apparent that the farm’s woodland wasn’t big enough to produce the volume of material required.

In addition, woodchip boilers were ruled out because of the high numbers of moving parts and consequent maintenance requirements. Instead, he turned to the idea of burning home-grown straw.

“It’s not rocket science – you burn straw in a steel box with a water jacket around it. This hot water is passed through a big radiator that heats the air going into the grain store to dry the grain.

“We looked around and after talking to several people running straw boilers, I was convinced by their simplicity and reliability – there were a number out there over 30-years-old and still running.”

“There seemed to be three options – Dragon Heat, Glen Farrow and Farm 2000. We settled on the latter because of its capacity and simplicity.” 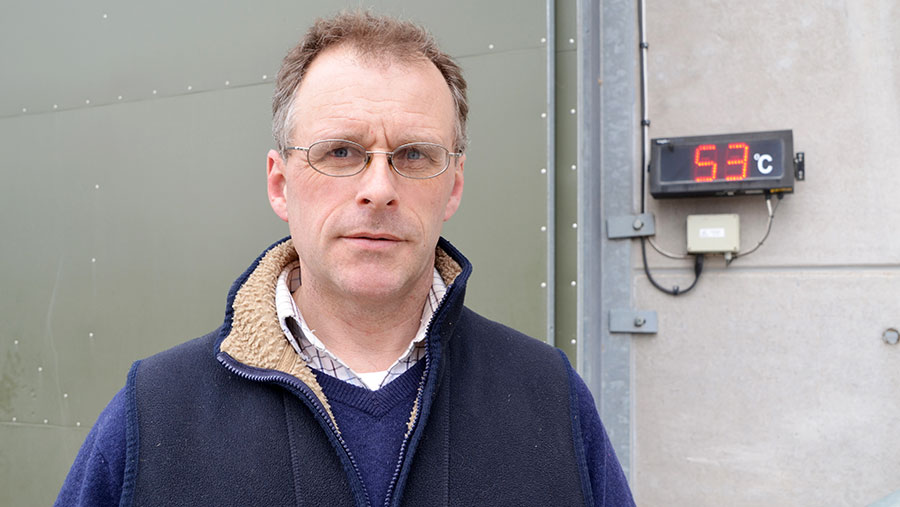 Having plans in place for a 1,200t floor store, the calculated heat output of the suggested gas space heaters needed to be something close to 300kW to dry wet corn at a reasonable pace. A lesser burner would still do the job, albeit at a slower pace.

Although tempted by the higher payments for smaller boilers, Mr Blatchford opted for a 294kW Farm 2000 BB254H/2 boiler, which qualified for the less-lucrative payments.

“We had more flexibility for the future in being able to burn any size bale and, because it would need stoking less often, less hassle.

Critically, when we really needed it we would have the heat capacity to dry big tonnages of damp grain at a decent rate.

“It was a slightly off-piste project and because of that I felt we needed a bit of hand-holding. At the time there seemed to be very few people to do that.

Farm 2000 did not come out on farm but had an excellent manual to help guide us through the boiler installation and was very helpful on the telephone.”

“The next step was to work out how we’d transfer the heat to the air being blown through the underfloor ducts.

“While the various boiler manufacturers could offer plenty of advice and expertise in plumbing their burners into traditional heating systems, no-one was able to supply me with the full package to dry grain.”

So Mr Blatchford set about designing his own system. Two key elements needed sorting – a heat exchanger and some means of storing heat.

Then, having taken advice from a heat exchanger manufacturer on flow rates and temperature drop (300 litres per min with a 10C temp drop through 3in pipe) and Lincolnshire-based fan manufacturer Pellcroft on the airflow required for the floor store, he was able to make some calculations on the size of heat exchanger required.

Armed with this information, he contacted Heat and Cooling Solutions in Southampton, which double checked the figures and suggested a large, single-core radiator would be the best way to avoid restricting airflow, assuming a 10C temperature drop in the water entering and exiting the heat exchanger.

For a cost of around £1,300, a monstrous 2.4m x 3.6m heat exchanger was fitted in an opening on one side of the heavily sound-baffled blockhouse hosting the two Typhoon fans. 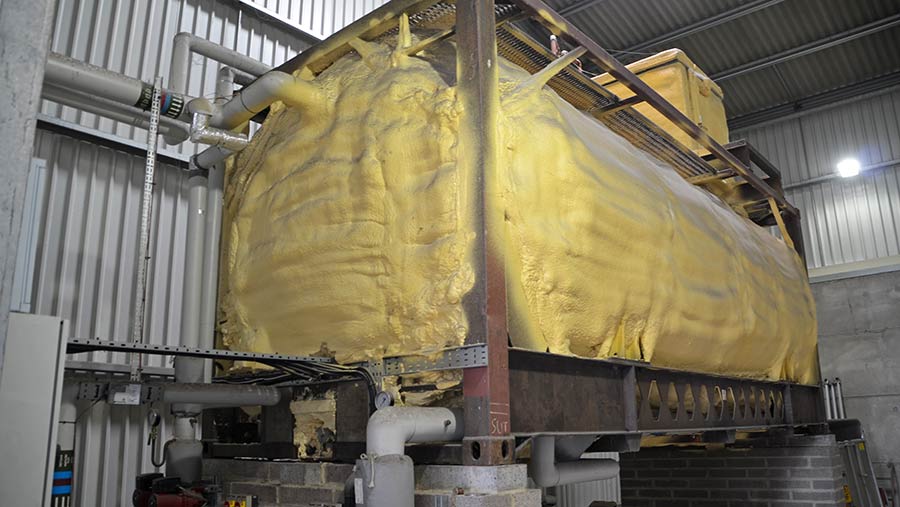 Next it was the heat store. Farm 2000 had suggested installing the biggest insulated water tank available to give plenty of buffering capacity and avoid the need to keep the burner running 24 hours a day, but even bespoke-built heat reservoirs didn’t match the capacity required.

So, for about £5,000, one was delivered and installed in the biomass boiler shed alongside the new grain store with various 3in tappings welded into it.

It came shrouded in a thin layer of insulation, but to keep the water warm for a decent spell a 100-150mm coating of spray-on foam was applied for an additional cost of about £700.

With everything in place it was then a case of plumbing it all in. Although big-bore pipework (3-4in) was used where possible, the system itself was kept very simple with straightforward flow and return lines from the boiler to the heat store and from there to the heat exchanger and back.

Farm 2000 supplied a simple boiler control panel, triggering the single door-mounted fan to fire up as required and the air diverter valve to send air to either the top or bottom of the combustion chamber depending on the stage of the burn cycle. 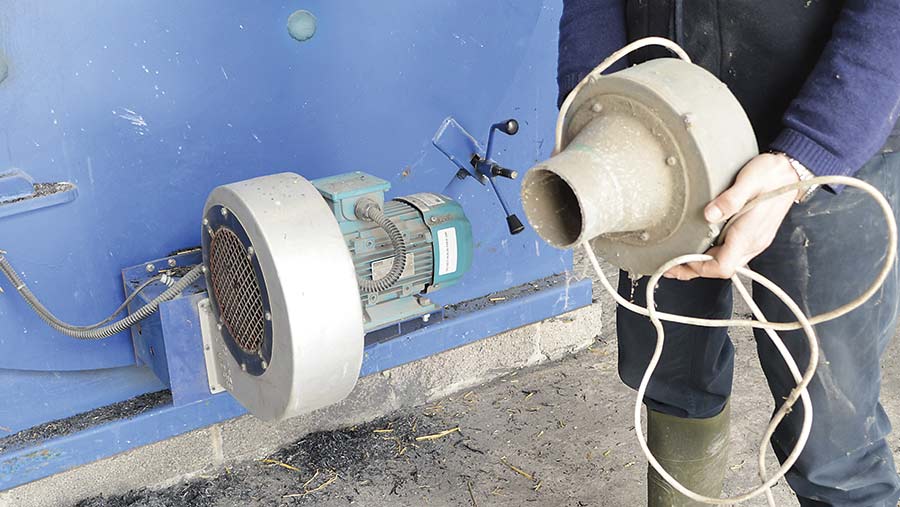 With the set-up installed and running, things seemed to be working well, although the burner seemed to be a bit underpowered.

“When we first set it going I was impressed that everything worked as well together as it did,” says Mr Blatchford.

“But I didn’t feel the burner was running as it should, so I decided to turbo-charge it and set a pedestal fan running in front of the intake for the factory-fitted unit. Immediately we got a cleaner burn.

“After a discussion with Farm 2000, it helpfully suggested a much bigger 2.2kW fan unit and new burner control box as well, which I believe is now standard for this size boiler.”

Five years down the line, the system has run pretty much faultlessly with very few modifications and the old 13t/hour Alvan Blanch dryer is now up for sale.

As regards performance, it depends on how dry the straw is. Mr Blatchford has been surprised how cool the water can be to still be able to dry with relative humidity.

Critical to that has been the gantry-mounted Harvest Installations stirrer set-up.

“We burn two four-string D4000 bales per burn over about 4-5 hours. The only limiting factor in how often we burn is that you do not really want the embers from the previous burn to melt the strings and pop the next bales you put in before the door is shut or it gets quite exciting.

“We do have a large hose by the door for these eventualities but have not had to use it yet. The heat output from each burn cycle is generally between 800 and 1,000kW, equating to an RHI payment of about £26 per bale.

In a typical year, with 2,000 tonnes of grain to dry, the farm will generally get through 230 bales.

Putting the value of the straw at £10/bale at harvest, without taking RHIs into account, the fuel bill is about half what the old dryer used to cost to run.

On top of that, there’s the heating bill for the house and cottage. Their heat consumption equates to about 150 bales/year, or £1,500 – a third of the previous oil cost.

“We’ve still got the oil boiler in the house as back-up and, of course, the Aga,” says Mr Bltachford.

The total investment in the system came to just shy of £100,000 but, with the RHIs alone bringing in around £10,000/year alongside the cut-price fuel bills, it’s not hard to see the value of the set-up.

“I think the key thing in the success of our system has been its simplicity. If the water is slightly cooler, it’s just going to take a bit longer to dry the grain.

“Most things we could mend if we needed to – I just hope Farm 2000 does not make the controllers too complicated in the future,” he says.

“If I was to do the same thing again, the only thing I might change would be the size of the heat store to give us flexibility to hold more heat to use as required. Next time I might go for a 35,000 or 40,000-litre tank.

“Anyone with a 200kW+ biomass plant that is not busy in the summer who has an on-floor store could do exactly what we have very easily. It just needs a pump and heat exchanger plumbed into the existing system. It is so simple.

“There is nothing special about the on-floor store. I just use straw as opposed to gas or oil and get paid for doing it.”

Initially Mr Blatchford tried burning a range of different materials in the Farm 2000 boiler, but he has come to the conclusion that wheat straw is the best bet.

“We tried old, damp bales of wheat to begin with, but they smoked terribly and produced no heat, so we quickly learnt that the drier the straw was, the better. We tried some miscanthus too and the heat output was phenomenal but it tended to smoke,” he says.

“Rape straw was another option but invariably it gets cut green and has to be left to dryout before baling. In that time it generally gets several soakings, so you end up with a less-than-dry feedstock – that makes a huge difference to how much heat you get from a bale.

“Next we tried linseed – the energy value was huge (like napalm) but the burn cycle was completely uncontrollable – it would flare up to the point where it would run out of oxygen.

“Then it would start to pull air back down the flue and belch back out huge black clouds of smoke – it looked like cross between a steam train and a tractor puller. And, when I opened the inspection door to see what was going on, a 6ft flame shot out, singing my eyebrows – a good lesson never to store straw near the burner.”

“So we settled back on wheat straw. Often we’ll RoundUp the field we plan to bale for the boiler so that we know it’ll be properly dead and dry.”