As the winter weather starts closing in and the ground turns to pudding, wheeled implements need all the help they can get to keep moving.

Hydraulic drive systems promise to improve grip and reduce soil damage, and they’re already starting to make an appearance on some high-end trailers.

There are also a couple of prototype electric drive systems for trailers, but as yet this high-end tech hasn’t filtered down to the commercial market. The makers say it’s more efficient and easier to control than hydraulic alternatives. 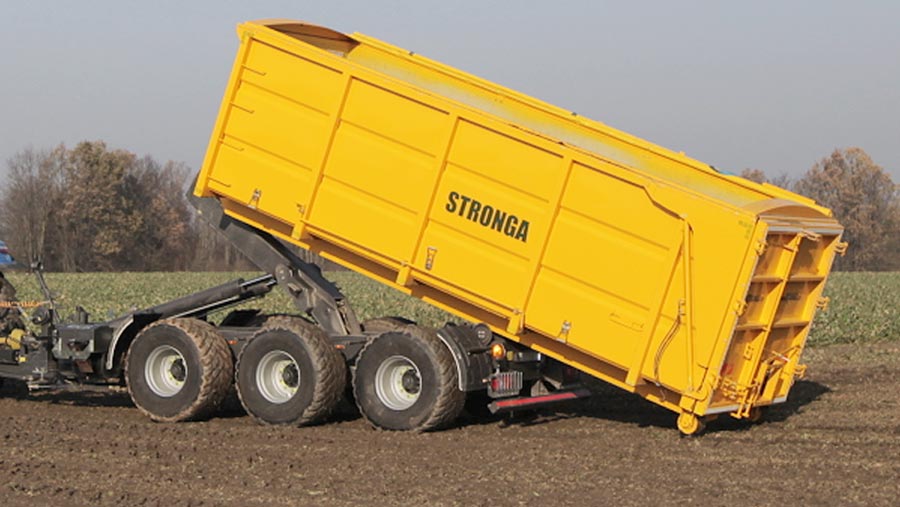 After being approached by some of its veg-producing customers to reduce the amount of damage trailers do to their high-value soils, hook-lift specialist Stronga invented the Powertrak axle.

This nifty system harnesses the tractor’s hydraulic power and uses it to drive one of the trailer axles, effectively creating a six-wheel drive rig. This significantly reduces wheel slip, which according to the maker widens the harvest window and prevents soil damage.

It also means a lower powered, lighter tractor can be used, reducing pressure on the soil as well as fuel consumption. 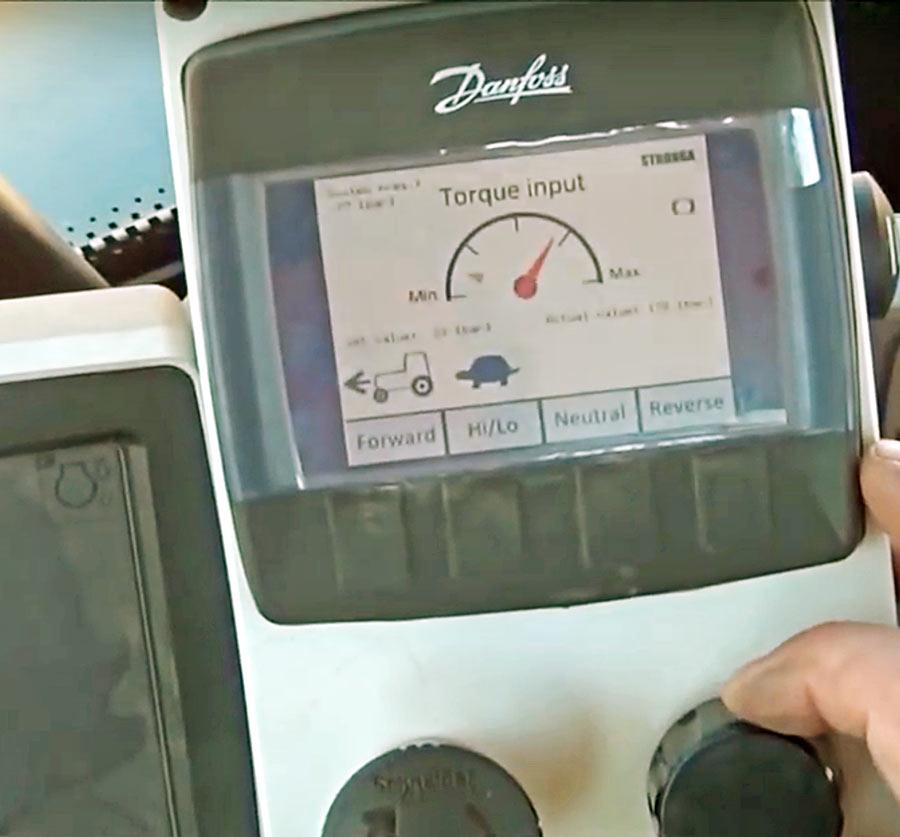 The maker trialed a number of setups, including full mechanical drive, before settling on adding hydraulic drive to the front trailer axle. It opted for this design partly because the leading axle has the most grip, but also because the rear one is often equipped with steering.

It works with both twin- and triple-axle trailers, but its arguably more effective on the twin version as there are fewer passive wheels to pull.

Power comes from the tractor’s load-sensing hydraulic connection, so it won’t work on tractors with a standard closed-centre setup. And due to the amount of heat produced, the engineers installed an additional in-line oil cooler to avoid overloading the tractor’s back end.

It might sound relatively straightforward, but according to Stronga it’s far from a plug-and-play system. In fact, each setup is tailored to the trailer, the type of tyres fitted and the tractors that are going to be pulling it.

In operation, it has a degree of automatic speed control through the load-sensing hydraulics, but there’s also a potentiometer fitted in the cab that allows the driver to adjust the amount of torque delivered to the axle.

For safety reasons, it’s also set to freewheel when the speed of the tractor exceeds the maximum speed of the hydraulic wheel motor. 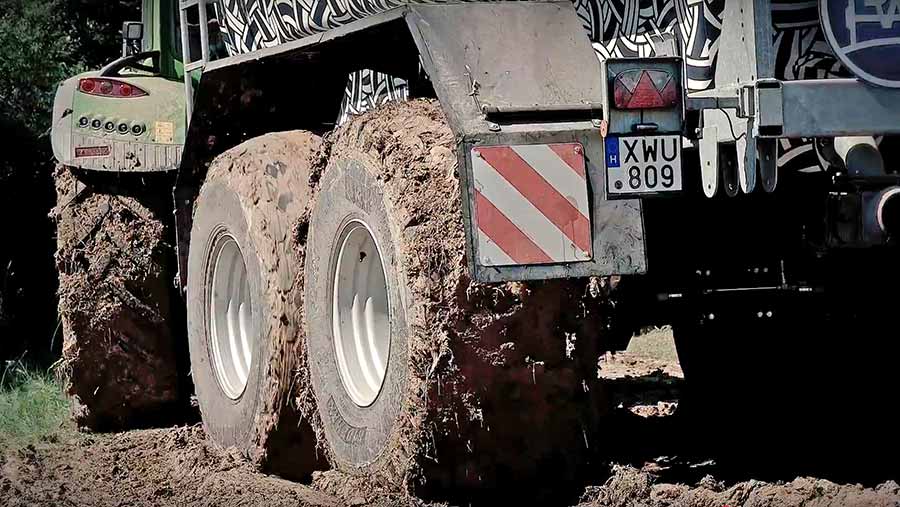 Axle manufacturer BPW has also been working on a hydraulic driven axle that implement makers can fit to their machines.

The Agro Drive unit uses Black Bruin hydraulic radial piston two-stage motors, which are designed to give a broad speed range for in-field operation. Like the Stronga system, these also have an automatic freewheeling mode that kicks in at higher speeds. 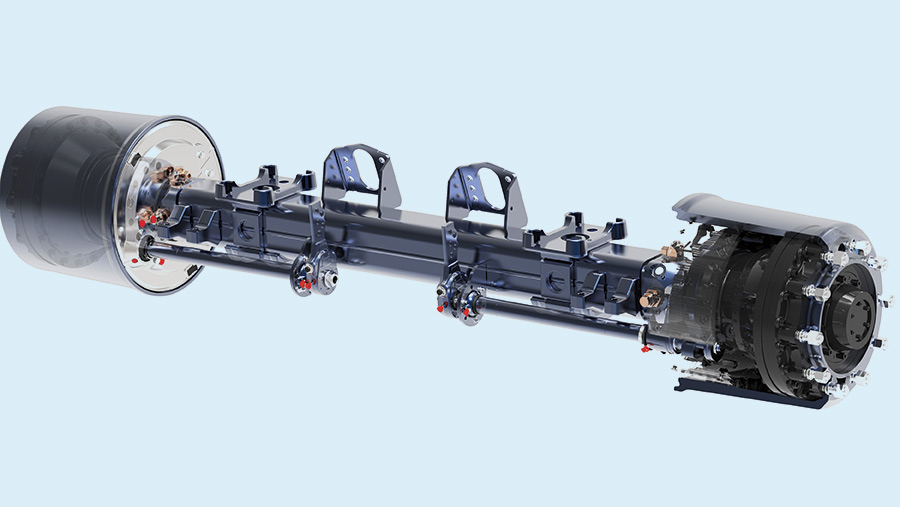 Officially, the axle isn’t being launched until January 2019, but there are a number of pre-production models currently working in Germany, Belgium, Denmark and Sweden. Apparently, several well-known makers are working with the system, including Hawe, Fliegl, Strautmann and Krone.

BPW says the axle has been designed in such a way that the brake pads can be changed without having to disassemble the hydraulic motor.

The axle can be installed on leaf, air and hydraulic suspension units and comes pre-plumbed for a tyre pressure control system. There’s the option of adding speed, rotation direction and ABS sensors, too.

There are already a couple of prototype electric drive systems for trailers, but as yet this high-end tech hasn’t filtered down to the commercial market. The makers say it’s more efficient and easier to control than hydraulic alternatives. 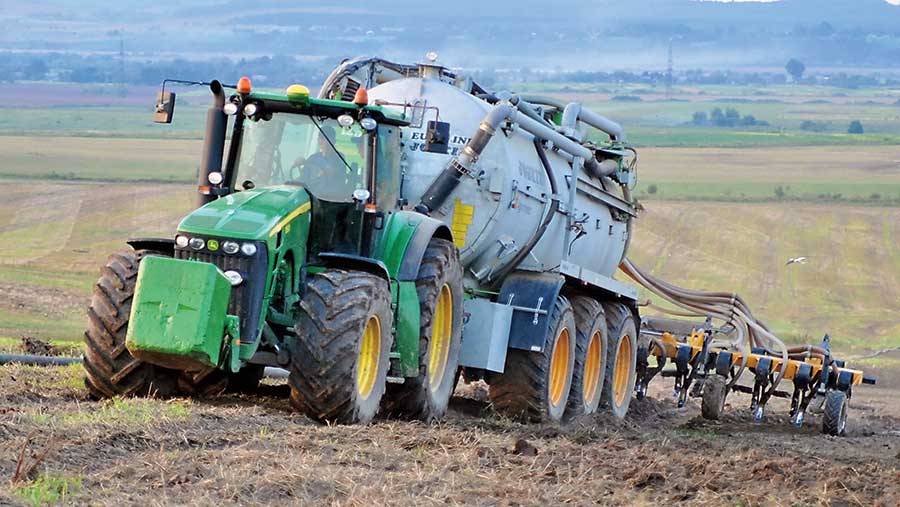 Joskin’s answer to winter traction problems was to come up with a hybrid electric drive system that sends power to the two rear axles of its tri-axle machines.

This ultra-techy setup starts with a pto-driven generator that converts the tractor’s power into electricity, which in turn drives a 120KW Schabmueller electric motor.

The mechanical power from the motor is then distributed to the two rear MAN-built axles via conventional drive shafts. To further improve traction, the axles are fitted with diff locks and there’s the option of a remote tyre inflation system.

It might sound a bit over the top, but Joskin says the system is far more flexible than an old-school mechanical drive that has a ridged link between the tractor and implement. It also reckons it’s more efficient and controllable than a hydraulic system.

This controllability comes thanks to an Isobus link between the tractor and the implement that automatically manages the power transferred to the electric motor without any input from the driver.

As well as its ability to travel better in the wet, Joskin says the system allows a smaller and lighter tractor to be used, reducing both fuel use and compaction. This is because you no longer need to have extra weight piled on to the tractor to get grip as the implement wheels are doing a large proportion of the work.

The final element of the system is a lifting front axle. Using this transfers more of the weight to the rear of the tractor and the driven implement axles to reduce drag and add even more grip.

At the moment, the system is still a prototype, but Joskin says it hopes to have it available commercially in the near future.

German trailer, spreader and tanker maker Fliegl also has a very similar setup in the pipeline, which it calls Power Drive Elect.

Track units are the current favourite for keeping going in less-than-ideal conditions, with scores of manufacturers offering systems with varying degrees of complexity. Units with hydraulic drive are also on their way. 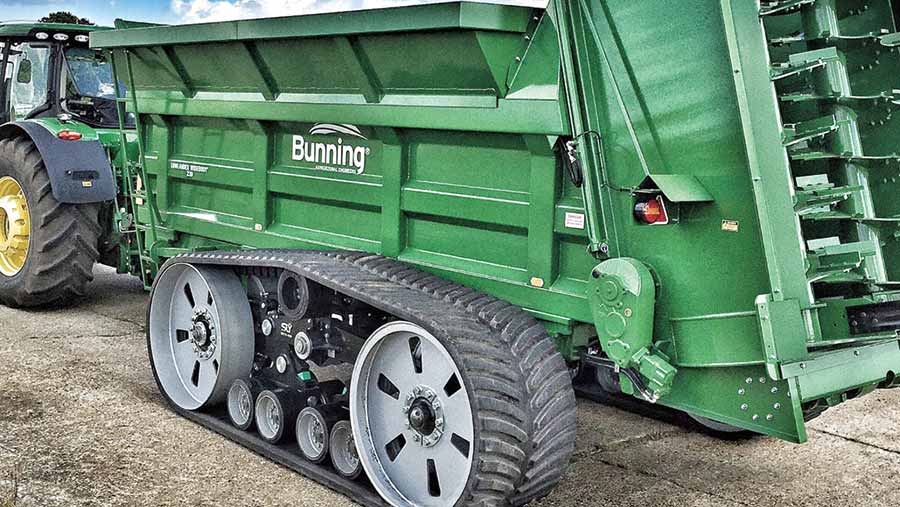 The smaller twin-idler units are rated to carry up to 35t, while the full-size, four-idler versions can take up to 55t. Both can travel at speeds of up to 30kph and come with the option of no brakes, multi-disc units or drums.

Two track widths are available – 762mm and 900mm – and there’s the option of adding hydraulic suspension too.

Powered versions are already in development and these use a hydraulic motor assembly that bolts directly in place of the standard rear hub. According to Sly, this makes it a lot more cost-effective than having to design a whole new unit.

Rather than rely on the tractor’s oil supply, Sly has chosen to fit a pto-driven hydraulic pump and a separate oil supply. There will also also be an in-cab controller so that the operator can adjust the amount of power going to the motor and match it to the speed of the tractor.

Sly says the tracks can be fitted to most trailed implements without having to modify the chassis. It has units working on a number of machines including Perard chaser bins, Bunning muck spreaders and the French trailer brand Gourdon. 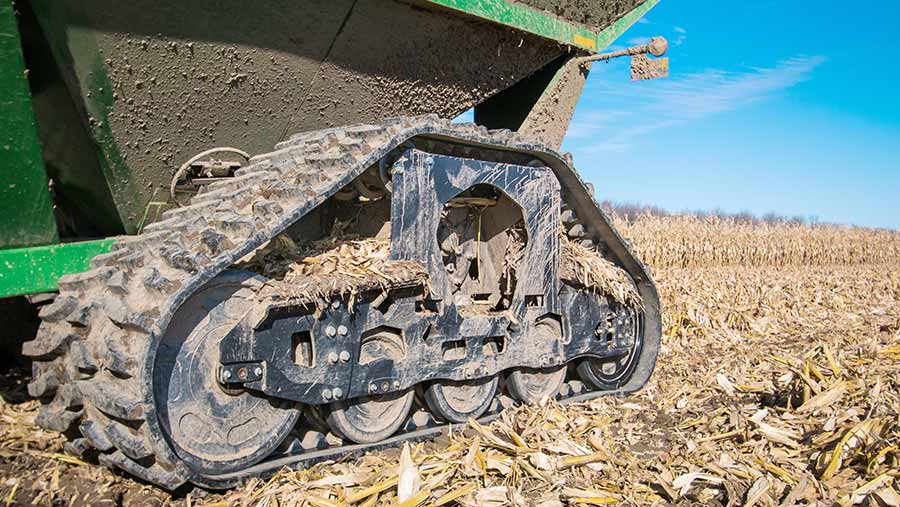 Soucy is one of the biggest names in the track business and unsurprisingly it has a comprehensive range suited to trailed implements.

The ST-032 units pictured are designed primarily for trailers and chaser bins, but the firm says they are increasingly being used on trailed sprayers, drill seed carts and large liquid fertiliser tankers.

Many of the units produced to date are operating in the firm’s North American heartland, but there are a few 12in- and 32in-wide versions working in European fields.

No modifications are required to fit them to a trailer chassis and they have been designed so that they can be switched between machines fairly easily. That means they can be run on a grain or silage trailer in the summer season, before being switched to a muck spreader or slurry tanker in the off season. 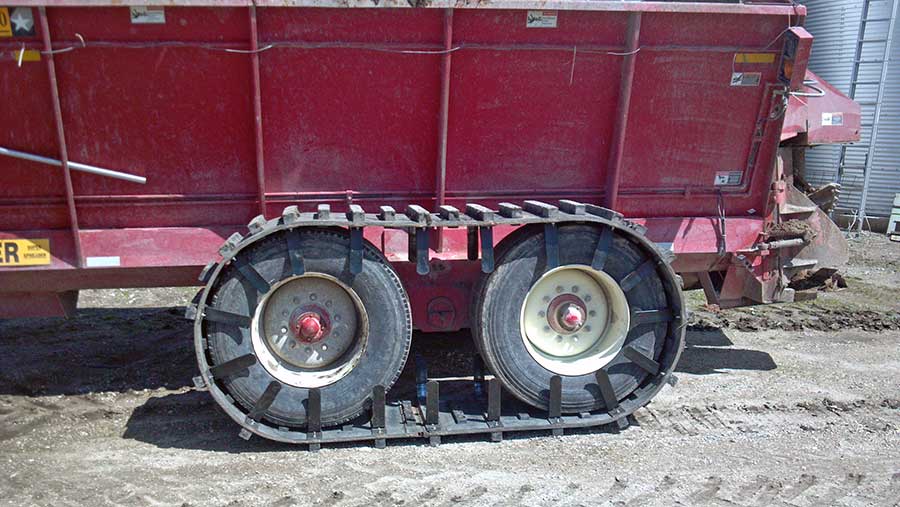 A slightly simpler approach to in-field buoyancy comes from Right Track Systems based in Edmonton, Canada.

The firm started out making simple track units to go round skid-steer wheels, but in the past 10 years it’s branched out into bigger units for HGVs, trailers and various other agricultural kit.

These rubber belts wrap around the trailer’s existing pneumatic tyres to give added floatation and have a friction drive with small inner cleats to provide additional bite. There are also guides on the sides to stop the belts coming off.

Right Track Systems can build the belts to any length or width and there’s the option of several grouser types and patterns. These are interchangeable, too, so the tracks can be adjusted for different conditions.

Orders are taken and distributed directly by the firm in Canada, and so far it has units working across Europe, North America, Africa, Australia, and Asia. 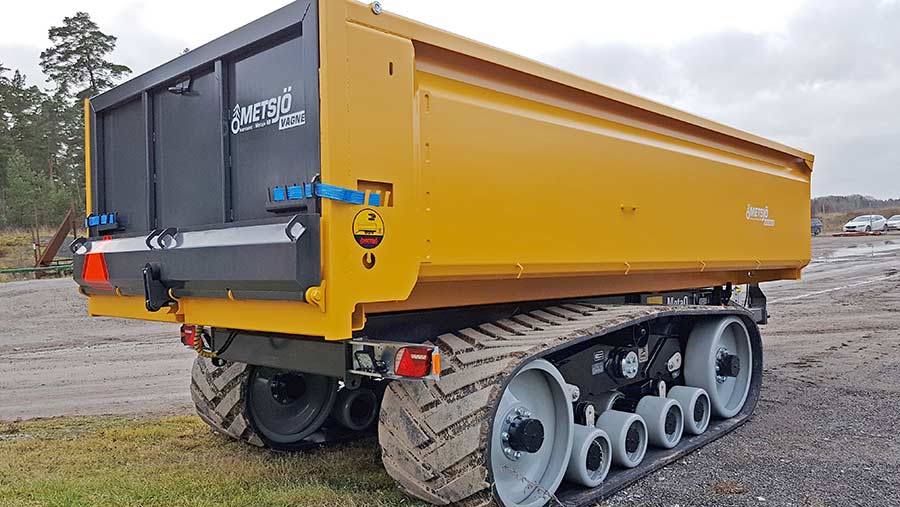 Sweden has more than its fair share of soggy ground, and to help deal with these conditions home-grown company Metsjo has designed a range of tracked trailers.

Rather than going to the trouble of designing the running gear from scratch, the firm has turned to Camso (formerly Camoplast) and opted to fit its eight-roller TTS assemblies. 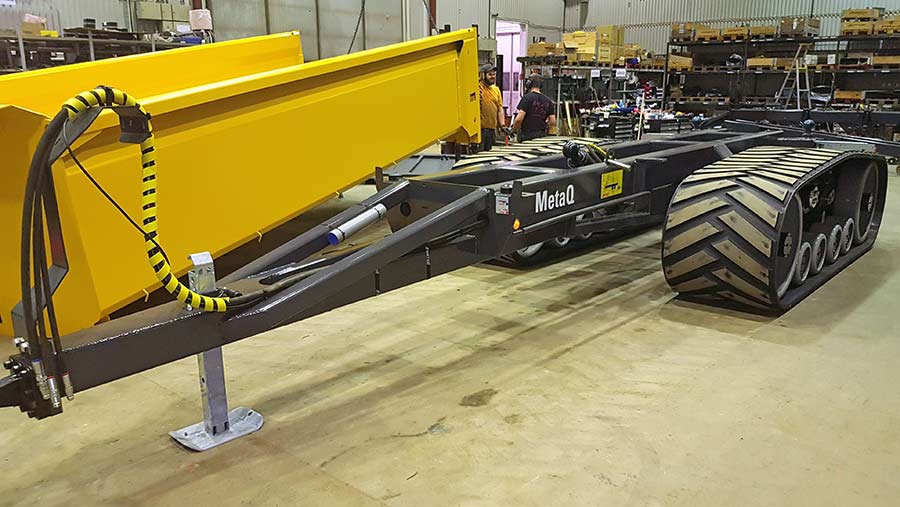 These have double-oscillating bogie wheels to help them flex over undulating ground and there are sprung tensioners to keep the belts in place. The rubber itself has specially designed treads, which supposedly lower the rolling resistance and reduce berming at headlands.

Metsjo fits the units to its MetaQ range of trailers that have the option of grain, silage and earth-moving bodies. The tracked dump pictured has a list price of €125,600 (£112,081). It has also fitted tracks to its range of Metaflex Hook-lift trailers. 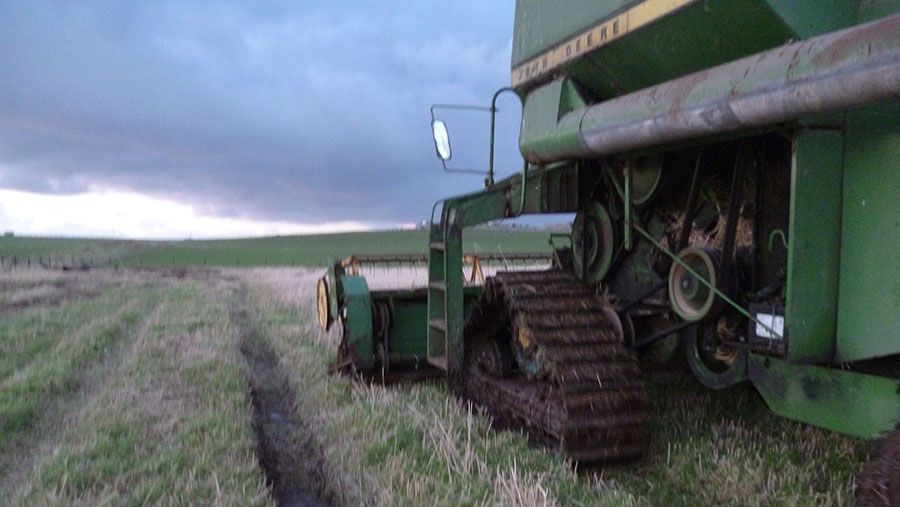 If you’ve come up with your own method of improving in-field traction we’d like to hear from you. Please get in touch by emailing fwmachinery@rbi.co.uk, including a picture of your invention, a few words about how it works and your phone number.