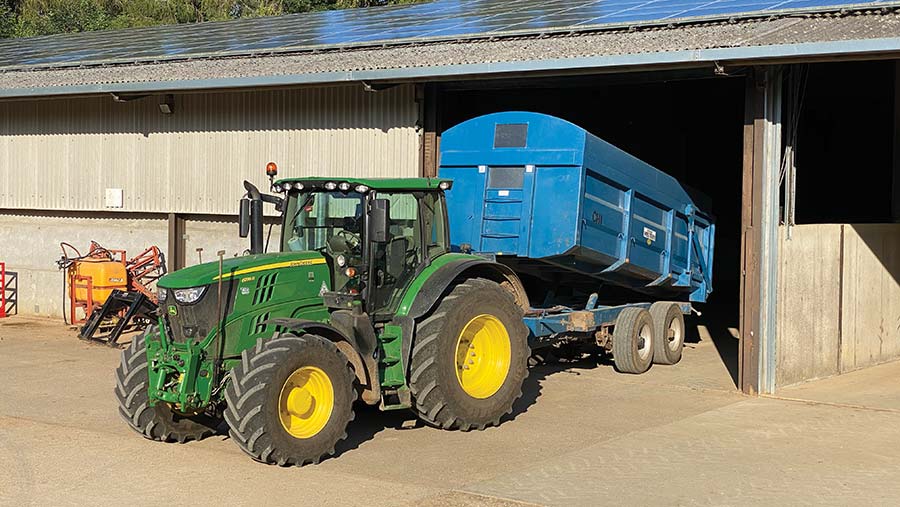 Arable farm profits may be at the mercy of fluctuating commodity values, but knowing the exact quantity of grain in store has given Gloucestershire grower Ian Watts a stronger hand when it comes to bagging decent forward prices.

Like many farmers, he operates without the luxury of an on-farm weighbridge, so until recently his only means of tracking the quantity of crop coming off the field relied on educated guesswork.

The risk of financial penalties, should his estimations fall short of reality, often left him without the confidence to sell large quantities of grain for delivery later in the year.

See also: Ultimate guide on how to install a farm weighbridge

“Though we have a yield monitor on our Claas Lexion 650 combine, I’ve often been caught out by variations in specific weight that have left us a load or two short when selling forwards,” says Mr Watts, who runs the 360ha farm at Chipping Campden alone. 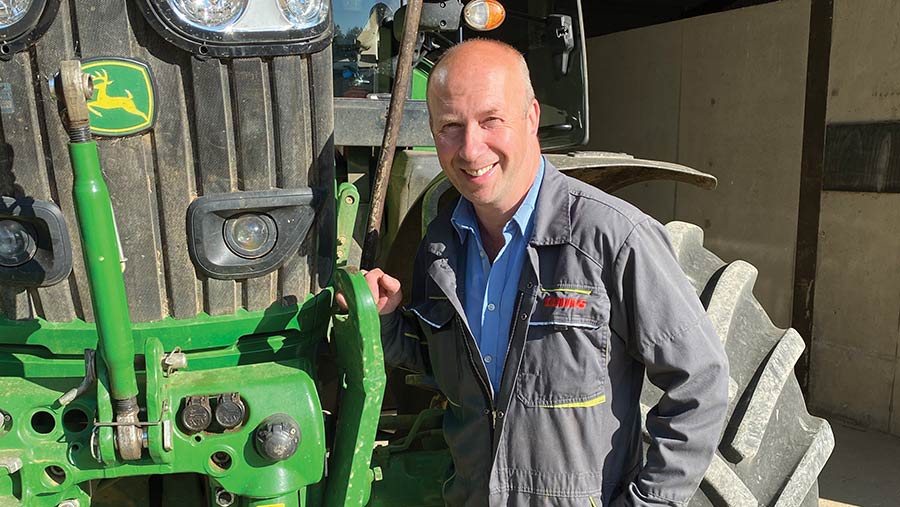 The obvious option was to shell out a five-figure sum on new weighbridge infrastructure, but the numbers simply didn’t add up.

“A pit-type system that sits flush with the ground, which we would have needed to avoid taking up precious yard space, was going to cost about £30,000.

“But it offered little prospect of a decent return on the investment, so we decided it wouldn’t be viable.”

Instead, Mr Watts looked into the alternative of using retrofit scales to weigh each trailer load as it leaves the field.

“We had an RDS load monitor on the farm previously and, although it was good in principle, measuring the weight using a pressure gauge in the trailer’s hydraulic line didn’t give us the consistent accuracy we needed.” 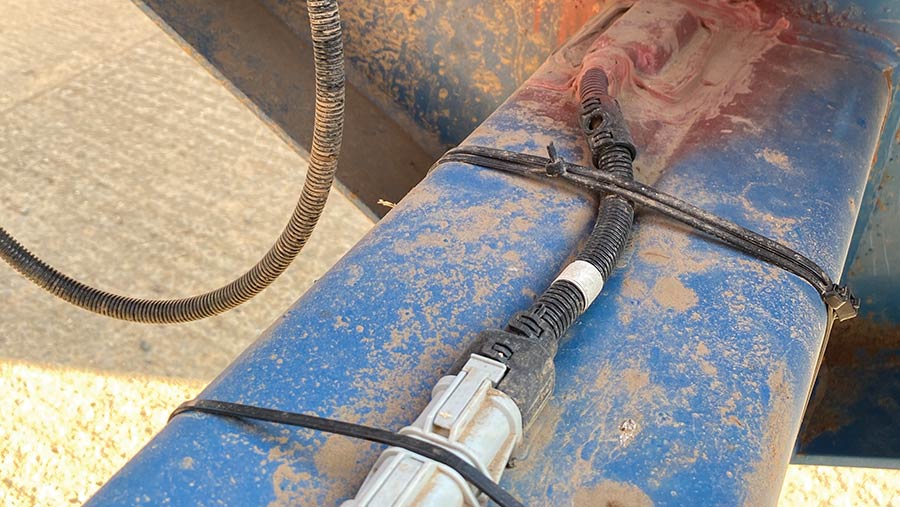 Its HGV-type setup was recently adapted by UK distributer Bowmonk, based in Norwich, to work on agricultural trailers.

In the same fashion as those fitted to artic bulkers, it uses strain gauges on the axles and drawbar to measure molecular movement – the miniscule degrees of bend caused by the trailer’s load.

These rely on SIM-card-sized patches in contact with the trailer’s metalwork to apply a small electric current and a little computer to measure the return supply, just like the live and neutral lines in a 13amp plug.

Fitting three sensors on each of Mr Watts’ 12t Richard Western twin-axle trailers – a job that took 10 hours in total – makes it possible to keep tabs on more than simply total payload.

Gross trailer, drawbar and individual axle weights can all be recorded to 10kg accuracy, helping to make sure the rigs are running within their legal limits.

Bowmonk also offers the option of an overload alarm that sounds when the cargo exceeds preset maximums.

“By the same token, running underweight is not productive – particularly as I shuffle between two corn cart trailers on my own – so it helps me be sure of running at maximum capacity.” 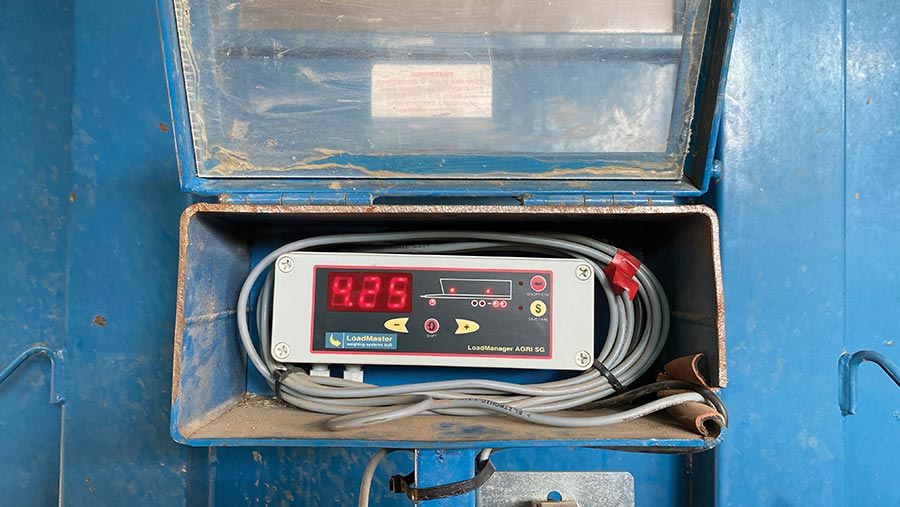 Information is displayed on a monitor typically mounted in the cab.

However, Mr Watts fashioned a Perspex-fronted steel housing in front of the steps on each trailer to save juggling wires every time he switches trailers.

“I’m now able to keep a tally of exactly what each field has produced.

“It obviously makes it easier to track the performance of different varieties and impact of staggered sowing dates but, more importantly, gives me the insight I need to forward sell commodities later in the year.”

“The system is accurate to at least 5% of the total yield – provided it is calibrated at the local weighbridge before harvest – so I have a far better idea of what is in the barn.”

“This reduces the risk of getting penalised for not fulfilling a contract and opens up far more options in terms of trading when the price is right.

“Selling in November for May or June movement might get an extra £10/t, so it hasn’t taken long for the £2,500 investment in each set of scales to pay off.”

The addition of scales is the latest improvement in a decade-long process of up-speccing the farm’s pair of 20-year-old trailers.

“Given that they’re used for just six weeks of the year for grain carting, we haven’t been able to justify outright replacements.”

“We run a slimline fleet, so machinery purchases have to be carefully calculated and the potential £35,000 cost of two brand-new trailers didn’t stack up,” he says.

Instead, the ag-spec running gear was upgraded to commercial standard in 2010 at a cost of £3,000 per trailer.

This improvement in braking efficiency was followed by the addition of hydraulic tailgates, which have vastly sped Mr Watts’ unloading times.

After switching to a higher-output Lexion 650, he also fitted 300mm steel greedy boards to both trailers.

“Arching the steelwork at the front and back means we can now brim the trailers and, with grain filled corner to corner, they can carry 16.5t of wheat, putting us just within the 31t gross train limit.”

“Though none of the expenses directly influence yields, the marginal efficiency gains and more accurate yield monitoring has allowed me to be more strategic about cropping decisions – both in terms of drilling and selling.”