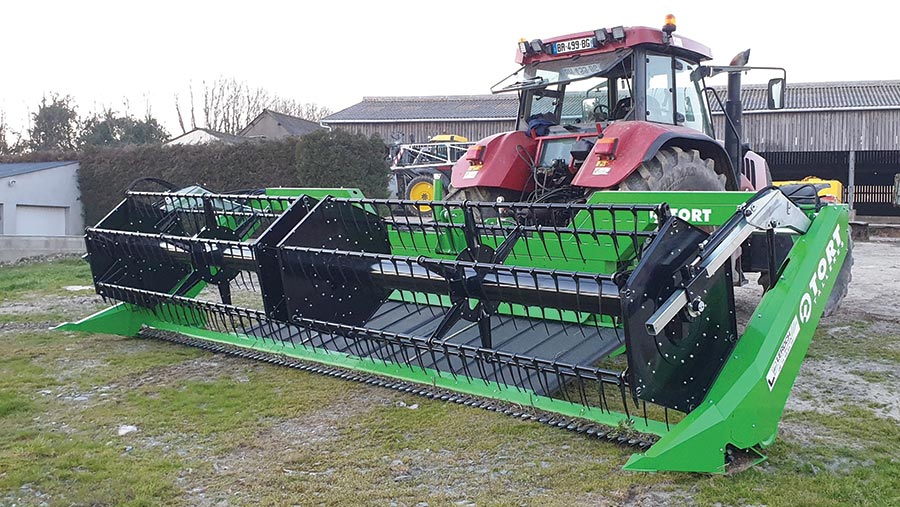 The Spanish-built Tallares Tort can be specced with up to three moveable belts that allow owners to adjust how the swath is laid.

Two belts can be set to run inwards to form a single row that runs under the tractor, or outwards to form two rows.

By adding a short extra belt section and blocking one of the mouths, it’s also possible to form larger swaths by shifting the crop in one direction to a single end opening.

This means rows can be laid alongside one another to form fewer, bigger swaths for the combine or forager, which may be particularly useful in thin crops or when using one of the narrower swather models.

Swath width can also be altered via the adjustable deflector plates to a maximum of 1.4m wide and 1.3m high.

The outfit is designed to be carried on the front linkage of a tractor, or on the rear for models with a reverse drive system.

The company says it is also possible to rig the kit to run on a forager or combine.

The belts, three side knives (one centrally, plus at either end) and cutterbar run from the tractor’s pto drive.

Reel adjustment is via a quick-coupling hydraulic system, which uses two double-acting and one single-acting spool.

Ground-running wheels at either end of the header help to follow ground contours and there’s a nitrogen accumulator to provide a degree of suspension.