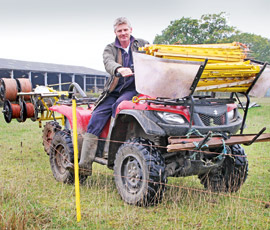 Clocking up over 500 hours a year on an ATV is no mean feat. But for a Warwickshire farmer his machine does all these hours and more. Andy Collings reports

When it comes to running his 900 breeding ewes, Jim Sessford says would be pushed to say which is more useful – his dogs or his ATV.

Operating at Lower Hunscote at Charlecote in Warwickshire, Mr Sessford has been using ATVs since 1994. Only rarely does a day go by when he is not using one to perform some essential task.

Lower Hunscote farm runs to about 280ha (700 acres) of which 120ha (300 acres) is used for arable cropping – winter wheat, winter barley and oilseed rape – with the remainder down to grass. Mr Sessford says he aims to reseed up to 24ha (60 acres) each year but this depends on how busy things are with the arable crops.

More land is also rented as grass keep for the ewes during the autumn and a place for them to over-winter.

The latest ATV to arrive is a Suzuki KingQuad 500 AXi which replaced a Honda TRX.

“All I ever ask of an ATV is that it starts when I want it to and it goes where I need it to go,” he says. For me these machines are serious workhorses which, like the tractors I run, need to be able to come up with the goods when required.”

January sees the ewes being transported back home after their spell on the grass keep. At this time, with grass in short supply, the ATV is hooked up to a Logic feeder which drops measured amounts of food on to the ground for the ewes.

The ATV also clocks up the hours making daily flock inspections to ensure any ailments are spotted early. Come February, all the ewes are back home and the ATV is tasked with collecting all the electric fences from where the sheep have been, and then erecting them around the paddocks where they will be after they have lambed.

Mr Sessford reckons he has got electric fencing down to a pretty slick operation.

“Given a reasonably shaped field, we can put stakes and two strands of wire around a 30-acre field in about 20 minutes,” he says.

With lambing under way in March, the ATV is commandeered to take ewes and their lambs out to the fenced grass leys – a trailer has divisions to hold the lambs at the front and the ewes behind.

Lambing 900 ewes in one go is not without its problems but by April the job will be drawing to a close. The ATV is in almost constant use making regular flock inspections, taking out creep feeders and delivering feed for the lambs and ewes, and if that was not enough, there are, as ever fences to move.

By May the amount of feed taken out to the creep feeds using the Suzuki peaks at about eight tonnes a week and some of the 1,800 lambs are ready for market.

The rest of the year is taken up with weaning and the gradual reduction in lamb numbers and a reduction in grass, the latter requiring the ATV to now be used to take out hay as a buffer feed – along with the creep feed.

With such an all-year-round dependence on the ATV, regular maintenance is important and Mr Sessford has it serviced twice a year by his local dealer.

“If you want an ATV to start at the touch of the button when temperatures are down to -10C as I do, it has to be in good condition,” he concludes.