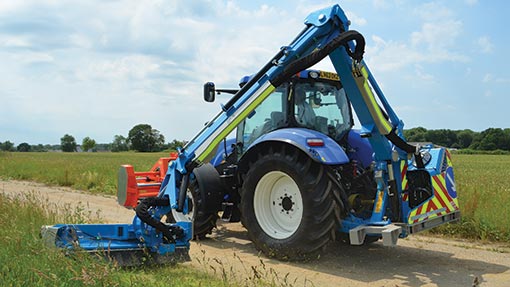 Hedgecutters have evolved a lot in recent years, and there’s less chance of neckache with the forward reach models. Here we highlight some of the latest developments

Shelbourne Reynolds introduced a new range of variable forward reach telescopic hedgecutters earlier this year at Lamma, and has since introduced another slightly smaller machine for those who may not have need for the initial 7.5m HD775 VFRT.

The new HD765 VFRT (pictured above) has, as the name suggests, a range of between 5.6m and 6.5m, suiting it to lighter and lower hp tractors than the larger model of around 120hp and 5.5t. It gets the same flail head as its larger brothers and has a total cutting width of 1.5m.

Shelbourne manages to vary the reach using a pivot between the first and second arms, allowing the operator to position it exactly where it needs to be for comfort, for example alongside the tractor.

Furthermore, a telescopic second arm means a multitude of cutting positions are available at different reaches, including behind the tractor’s rear wheel.

It comes as standard with a digital proportional joystick and can be mounted on the three-point linkage or Shelbourne’s axle bracket. 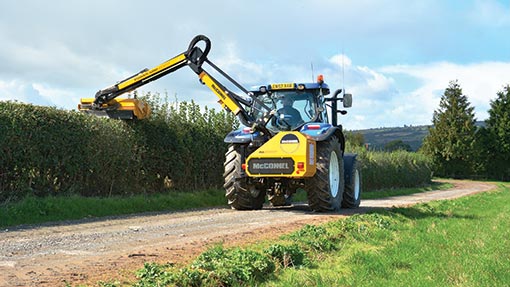 Meanwhile, McConnel’s telescopic VFR arm-set is now available for new 70- and 85-Series Power Arms. The 1m telescopic extension allows operators both close cutting and extra reach on demand, while the flexible positioning also makes it easier to cut around obstacles.

The company has also launched what it describes as its best-value power arm aimed at both farmers and contractors. The 65-Series of power arm has 65hp hydraulics and a choice of four different reach sizes from 5.5m to 7m.

The range can be either three-point linkage mounted or there is an axle-mounting option. Parallel linkage geometry delivers control over positioning, while soft-start rotor engagement is available on electric rotor controls.

There’s a choice of control systems, including the company’s Revolution system that offers hands-free cruise control for verge mowing, which it says can increase working speed dramatically.

Depending on the choice of attachment, the range can be paired with tractors weighing as light as 3,500kg and with power of 65hp. 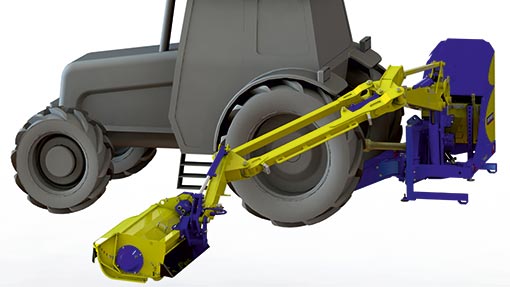 With Bomford’s new Hawk Evo Variable Forward Arm (VFA), the operator now has the flexibility to not only move the arm and head at 90 degrees to the tractor, but also in line, parallel to the tractor.

The VFA incorporates a novel new parallel linkage system that enables the arm to be moved backward and forward parallel to the tractor.

The design of the parallel linkage system means that, in addition to altering the reach of the mowing head up to 6.5m from the tractor, the mowing head can be moved forward by 1.6m, or moved back by 0.560m, giving a total range of 2.16m.

By offering control over not only the reach but also the position parallel to the tractor, Bomford believes both visibility and comfort are increased. Also, when an obstacle such as a road sign is reached, it’s far easier to accurately manoeuvre round it, without having to shuttle backwards and forwards.

The VFA can be operated with the fully proportional electronic programmable ICS (intelligent control system) and the new Variable Forward Arm design, and is suitable for tractors of 65hp and above. 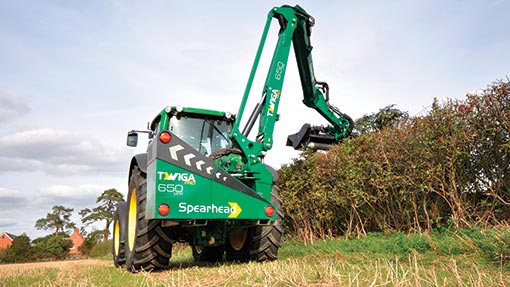 The Twiga Pro Series is Spearhead’s most popular heavy-duty offering for contractors. It has six reaches available from 5.6m to 8m, including a fixed arm model, two variable forward reach (VFR) versions and three telescopic arms – so there’s plenty of choice.

The VFR machines are available in both 6m and 6.5m reaches and feature a 1.6m forward and 0.9m rearward reach, for narrower lane cutting. Fitted with proportional controls as standard, the machine can be upgraded to include the Pro Pilot control system if required. There’s also an option to boost power up to 85p from the basic 66hp while there’s also as integrated axle mounting system available for those not wanting to mount on the three-point linkage.

Spearhead also offers the larger Twiga Flex, a popular choice for verge mowers and embankment maintenance guys. The arm-set of the Twiga Flex can be shifted through 140 degrees, some 50 degrees more than traditional machines. It gets an 80hp load-sensing hydraulic system, as well as a 70cm offset slew which allows the arm to be brought as far forward as the front linkage if required.

Ranging from 6.2m to 8.9m with telescopic reach, the Flex comes as standard with a 1.2m belt-driven Project Black Flailhead.