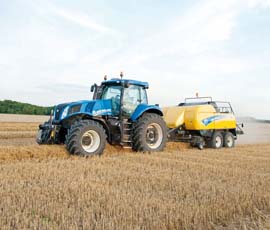 Managers at New Holland readily admit to being disappointed at the number of T8000 (and predecessor Series TJ) high-horsepower tractors that made their way on to UK arable farms.

But they are optimistic that things are about to change now that the successor range – the T8 – is here: “It’s not just a T8000 with an engine change,” emphasises product specialist Richard Hollins. “The tractor has different architecture that helps it perform better in the field and gives us features not possible with the previous design.”

The engine change he refers to is the switch from the 8.3-litre Cummins QSC to the latest-spec 8.7-litre C9 six-cylinder diesel from FPT Industrial. This is the marine and heavy-duty diesel engine business of Fiat Powertrain Technologies and is now a distinct business unit within the new Fiat Industrial company that groups Fiat’s capital equipment operations separately from cars and vans.

As an engine supplier to the Iveco truck and bus unit, which for several years has had to meet the sort of emissions control standards that tractors above 175hp must meet during the course of this year, FPT has plenty of experience of exhaust treatment technologies like selective catalytic reduction (SCR).

So it is no surprise this system is being used to comply with Euro Stage 3B rules, replacing the exhaust gas recirculation used to meet prior standards.

Together with a lower rated speed and increased torque output, the new engine is reckoned to deliver significant fuel savings over its predecessor, with further cost savings coming from service intervals twice what they were before at 600hrs.

Instead of being hung, cantilver-style, from the powershift transmission, the engine is supported on isolation blocks in the T8’s new front frame, which is heavily sculpted to give the tractor a tight steering lock, even when fitted with generous tyres.

“The cooling pack installation also helps; an engine with exhaust after-treatment generates less heat than one relying on exhaust gas recirculation, so it was possible to reduce the size of the cooling system,” notes Mr Hollins. “The widest part of the pack – the main radiator – is installed directly above the front axle so, in effect, the hubs pivot round it.”

As a result, despite having the longest wheelbase in its class, the New Holland T8 can typically achieve a 10m turning circle – about the same as the smaller T7 models. It pretty nearly brings the same level of manoeuvrability as the SuperSteer front axle of the T8000, which was not popular because it lacked suspension.

“With TerraGlide standard on the new front axle, T8 operators get improved manoeuvrability and the same level of comfort,” notes Mr Hollins. “Actually, more comfort than before because the cab also comes with suspension for the first time.”

Little wonder, then, that the New Holland team believes the new tractor will do better than its predecessor – but then other players in this sector have also been stepping up their designs and specifications, not least Case IH with the T8’s “cousin”, the Magnum EP.

This range also gets FPT Industrial’s 8.7-litre C9 SCR engine, which features overhead camshafts to keep the valve drive-train as simple as possible, and generates more power and torque than its predecessor.

Christian Huber, Case IH global tractor marketing director, emphasises the improvement in fuel economy: “OECD tests in North America show that the specific fuel consumption of the new Magnum EPs is up to 15% lower,” he says.

The engine also has power management, which is new to the Magnum, so outputs automatically increase by 6hp to 15hp, depending on the model, to handle pto and transport work more effectively. The Magnum 340 peaks at 389hp.

While the 19×4-speed full powershift transmission remains largely unchanged, there are tweaks to the crown wheel and pinion on the biggest models to handle the extra power and torque, plus new solenoids and software to further improve powershift quality. Next year, a heavy-duty CVT drive is on the cards.

Other changes for now include optional cab suspension for the first time to complement front axle suspension for added ride comfort. It comprises two manually adjustable spring/damper units for the rear cab mounts and two rubber mounts at the front.

Inside the cab, the Magnum driver now gets the same Multicontroller seat-mounted console already fitted to Puma and some Maxxum models, but with the more advanced AFS Pro 700 terminal.

While smaller in overall dimensions than the AFS Pro 600, the ISOBUS-compliant newcomer still has a 10in screen. More importantly, perhaps, it has a chipset with five times the computing performance and the ability to show two user-definable displays at once, including up to three video feeds from remote cameras.

Other Magnum updates include a new design front linkage and pto assembly integrated into the front of the tractor, and increased rear linkage lift capacity and hydraulic remote valve performance.

ActiveCommand Steering (ACS) is said to make the tractors easier to drive with accuracy, especially when travelling at speed on the road, by varying the amount of assistance and the number of steering wheel turns required to go from lock to lock.

“Dynamic road-wheel offset control uses a gyroscope to sense the tractor’s yaw and automatically makes small steering adjustments to keep the tractor running straight with minimal effort,” explains product specialist Gordon Day. “The variable-ratio steering means fewer turns of the steering wheel are required at headlands, but on the road, the steering is made less sensitive for easier control.”

The system makes its debut alongside a new info, monitoring and control terminal for the CommandARM seat-mounted console; an uprated precision farming terminal with faster data processing and bigger memory; and the new StarFire SF3000 GPS receiver with three-axis terrain compensation.

John Deere is also pushing the JDLink Ultimate telematics system with these tractors by providing the data collection and analysis subscription service free for the first year.

However, the main reason for the latest 8R tractors exhibiting subtle design changes to the hood grilles and lights is to highlight a change under the bonnet where Deere’s first engine to comply with Euro Stage 3B emissions standards is installed.

The nine-litre PowerTech PSX is also the first tractor engine in commercial use to feature an exhaust filtration system – a key component in the emissions clean-up package that Deere has chosen in contrast to the exhaust after-treatment that all other manufacturers have adopted so far.

Operators looking for more performance will welcome the hikes in power and torque that the latest engine delivers – typically another 15hp for draft work, with the “boost” feature lifting peak outputs by 12hp when the tractor is driving a pto-driven implement or hauling on the highway.

Few changes are evident in the cab, other than the new CommandCentre terminal sprouting from the forward end of the seat-mounted console.

The standard version can operate a number of GreenStar 3 functions, such as AutoTrac steering and SprayerPro application control, and can be used to operate ISOBUS-compatible implements. A touch-screen alternative not only allows fingertip operation, but will also stream video output from remote cameras.

A larger GreenStar 2630 touch-screen terminal has full AutoTrac steering capability, and when either terminal is used for this function, the latest-generation StarFire SF3000 satellite data receiver is reckoned to provide greater accuracy thanks to three-axis terrain compensation for roll, pitch and yaw, as well as faster start-up and signal acquisition, and better performance in signal shaded areas.

In addition to the new hood styling, another clue to the 8R’s latest spec and Stage 3B-compliance is the large filter housing at the base of the exhaust stack. This forms part of an integrated approach to emissions control that also includes a new two-stage turbocharging process.

Fresh air is drawn into the engine by a low-pressure fixed geometry turbocharger, which is positioned ahead of the existing high-pressure variable geometry turbo.

Combustion temperature is regulated to reduce nitrogen oxides (NOx) by routing some of the exhaust gas through a cooler and then back into combustion chamber mixed with incoming fresh air.

This approach does result in particulate matter that now has to be removed to meet the latest emissions rules, hence the need for the filtration system. Some are removed by the diesel oxidation catalyst – but its main task is to cause a reaction that reduces carbon monoxide and hydrocarbons.

The adjoining diesel particulate filter traps and holds the remaining particles, which are oxidised by a continuous “passive regeneration” cleaning process. If engine temperature, load or speed is insufficient for this process, then “active regeneration” is triggered, which injects a small quantity of diesel into the unit to burn away any deposits.

The small amount of ash that accumulates from this process is removed during routine servicing.

There are no outward signs of change or even new model numbers on latest Massey Ferguson 8600 Dyna-VT tractors, but there are useful changes beneath the bodywork nonetheless.

As the first agricultural tractor to use an engine with selective catalytic reduction (SCR) exhaust after-treatment, operators will already be familiar with the system. To meet Euro 3B emissions rules, the SCR package developed in conjunction with engine maker AGCO Sisu Power and Bosch has been further improved.

For one thing, higher pressure injectors and common rail fuel system have been added to the 8.4-litre 84CTA engine to further improve diesel efficiency, and rated speed is down a modest 100rpm.

New sensors on the engine and on the SCR system itself feed data so that many of the control parameters for the AdBlue urea solution dosing system are now handled by the engine’s electronic control unit (ECU). This fluid is not injected at a set rate, but according to the demands placed on the engine and thus the make-up of the exhaust gases – an engine worked hard will produce more NOx for the SCR treatment to neutralise.

“The AdBlue reservoir, which is larger than before at 60-litres and now integrated into the 630-litre diesel tank, will typically need topping up with every second fuel fill-up,” says Martin Wakely, product specialist. “SCR provides the best fuel economy because it allows engines to be tuned to operate at optimum efficiency. It’s also a very discreet installation on the MF 8600 Dyna-VT because the tractor was designed for it from the outset – it’s not an add-on.”

The “Generation 2” system has the addition of a diesel oxidation catalyser (DOC), which is located across the back of the engine in front of the cab. This maintenance-free flow-through device is not a filter – it causes an oxidising action as raw exhaust gases pass through a “doughnut” shaped, honeycomb structured outer element.

It also encourages a swirling motion in the gases to help mix the AdBlue injected at this point and so achieve an efficient NOx neutralising effect. This process is completed inside a slim, oval-shaped silencer where two SCR catalysers and two “slip” catalysers further treat the gas before it is emitted to the atmosphere.

“Using two sets of catalysers increases the efficiency of the process while minimising the housing size,” notes Martin Wakely. “Also, the shape of the ‘cat chamber’ does not impede visibility or add any large appendage to the exterior of the tractor.”

• Emissions control timetable: although the EU Stage 3B/US Tier 4 Interim regulations came into effect from the beginning of 2011, manufacturers are allowed to use up stocks of engines that comply with the previous standards through the course of the year. The more stringent standards apply to engines from 75hp as of January 1, 2012.