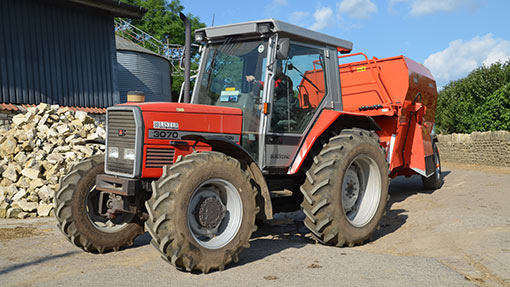 Over the past 21 years, Somerset dairy farmer Stephen Bendall has clocked up nearly 21,000 hours on his MF 3070, mainly in action as a tug for the family farm’s feeder wagon.

In 1986 I went to the official launch of the MF 3000-series at Stoneleigh. The 3070 was the first tractor of that range that I ever drove. With its turbocharged four-cylinder Perkins motor it packed heaps of power into a small space and its cab felt really modern and spacious – I loved it.

When it arrived it went straight on to our 9cu m Storti feeder wagon, which it was the perfect match for. We had just bought a mounted Vicon HPC mower-conditioner and so it also had the responsibility for knocking down all our grass – 250-300 acres/year.

It had bags of power for that job but needed a full set of weights on the nose as it had a tendency to cock a back wheel in the air if you tried to turn too tight with the mower lifted on the headlands.

It occasionally went on a silage trailer too, but on our banked ground it really could have done with that bit of extra length the six-cylinder 3000s had to keep traction. It’s not the ideal haulage tractor so it tends to stay hooked up on the wagon for most of the year.

The most important job it has done was to take us from the church to the reception on our wedding day!

I’m religious about servicing the tractor every 250 hours – probably overzealous. We drop the engine oil ourselves but we use Colin Higginson from local independent firm Noble Machinery for the bigger services and most repair work.

The electrics have never been great since the tractor was new. The alternator just wasn’t up to the job so in the first three years it was replaced three times. Since then it’s had a bigger one, which still needs rewinding every four to five years. It’s also had three starter motors over the past 21 years.

When the 3070 was two years old it had to have a new turbo but that was completely my fault. Without knowing I had left a loose washer in the air-cleaner after blowing it out. Being quite lightweight, it got drawn through by the flow of air and smashed all the vanes off the impeller.

Every 7,000-8,000 hours it has had to have a new clutch, but that’s just the nature of the job. Stop-start work along feed passages to unload and constantly shunting backwards and forwards takes its toll.

Four years ago a gear between the oil pump drive and the crankshaft gear started to disintegrate but I heard it just in time and managed to catch it before it did any serious damage.

The left-hand door has had to be patched in a few places and the step wobbles about a bit, which is probably a sign of just how many times I’ve jumped in and out of it. I’d hate to try and work that out.

It’s no deliberate policy as we tend to change our other tractors every 10 or so years, but with the 3070 it has just been that every time we thought about swapping it, something else has needed to be replaced – either a new parlour, loader or mixer wagon.

While it’s still going OK there is no need to replace it. We certainly won’t do anything until something major goes wrong.

What’s the secret to keeping kit running so long?

Don’t let anyone else drive it!

Never say never. But it’s unlikely as it just isn’t worth very much so it will probably stay with us until it dies.