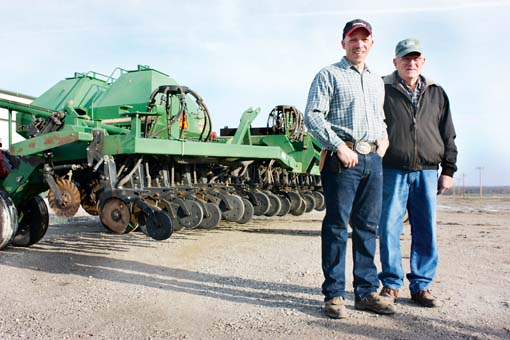 When you go to Kansas, you expect to see horizon-to-horizon wheat, sorghum and soya beans. What you don’t expect is sheep. However, Phil Kendall and his brother Kevin ran a 300-head sheep flock until just two years ago, when they got fed up with having to feed the flock all year round.

In other ways, their farm is what you’d expect to see in one of the Great Plains states. The business, near the town of Lindsborg, was started 100 years ago by the brothers’ great grandfather, who came to the US from Sweden. Phil and Kevin’s father Dan is officially retired, but is still involved with the farm

There are 1,200ha (3,000 acres) of land – some of it flat, but some gently undulating. The soils are mainly clays on the higher ground and loams lower down and annual rainfall averages a surprisingly damp at 810mm (32in) a year. However, rain is unpredictable and rainstorms that dump 125mm (5in) at a time are not unusual.

The main crops on the farm are hard red wheat, sorghum, soya beans and alfalfa (lucerne). The wheat is for milling and the sorghum and soya beans go for cattle feed.

The alfalfa is for cattle feed too – it’s cut four times from the beginning of May and baled with a Hesston baler. It is then sent to one of those giant dairy farms that you find dotted across the middle and western parts of America.

Wheat yields average 40-45 bushels/acre (2.7-3t/ha), though they can range between 30 and 80bu/acre (2-5.4t/ha). There’s little disease pressure, so they don’t have to spray more than a couple of times a season. However, more rusts and leaf spots seem to be sweeping in from the south, says Phil.

The relatively few passes made by the sprayer and reliance applying fertiliser at drilling time mean that tramlines aren’t much used.

Another surprise was that they can still burn straw. “We drill the wheat in the last week in September or the first week of October,” says Phil. “We can still burn crop residues like wheat stubble, though the ash does sometimes get into local residents’ swimming pools.”

Tillage techniques are changing. They used to chisel plough a lot of the land in autumn, but there’s been a steady move to min-till in recent years. Now they generally go straight into the stubble with a 35ft wide Great Plains NTA3510 drill, which applies phosphate at the same time.

They use a pair of big Case IH tractors to do the bulk of the fieldwork and Phil likes the pulling power and easy maintenance involved.

“I do all repairs and maintenance in my workshop,” he says. “I’ve just finished putting in a new transmission. It would have cost $20,000 if I’d got a dealer to do the work, but it’s cost me just $2,000. I’ve also just repainted the tractor too.”

The huge, well-kitted and clean-as-a-whistle workshop allows the brothers to carry on an unusual diversification too. They design and make the cutting tables which go underneath the plasma and laser cutters at the Great Plains factory in nearby Salina. They’ve made more than a 100 since they started and it provides useful extra income. 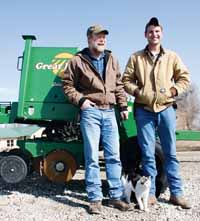 As you pull into the farmyard at Johnson Farms, also near the small town of Lindsborg, you could almost be in Shropshire. There’s nicely undulating ground, lots of trees, a field of cattle – not what you expect in Kansas.

As we drive up, Troy and DeeAnne Johnson and DeeAnne’s stepson Levi Norberg come out of the workshop wiping oil off their hands. Troy and DeeAnne been given an old Caterpillar tractor in need of refurbishment as a wedding present and it’s taking a lot of work getting it working.

They’ve farmed this 400ha (1,000-acre) wheat and cattle farm since 1985. It’s mainly clay land and they’ve grown continuous hard red wheat since the start, using four or five different varieties. Typical yields are in the upper 40s bu/acre (approx 3.2t/ha) and they have 300 Angus cows that calve between February and April.

They burn all the straw behind the combine but, like so many other mid-west farmers, their cultivation philosophy has changed.

“We used to plough everything, but often the soil would turn to concrete,” says Troy. “But seven or eight years ago we stopped. We now go in with a 14m (46ft) Sunflower chisel with straight shanks at 150-200mm (6-8in) depth. Then we use a field cultivator with legs that put on anhydrous ammonia.”

Cattle then graze the crop until mid-January, at which point extra N is put on. There’s generally no need to spray at all.

Drilling is done by their 9.1m (30ft) 35 3000D Great Plains drill and harvesting duties are done by a pair of Gleaner combines. The main tractors are a giant, Canadian-made Versatile 375 and a Buhler Versatile 2160, which is a North American version of a New Holland 8770. 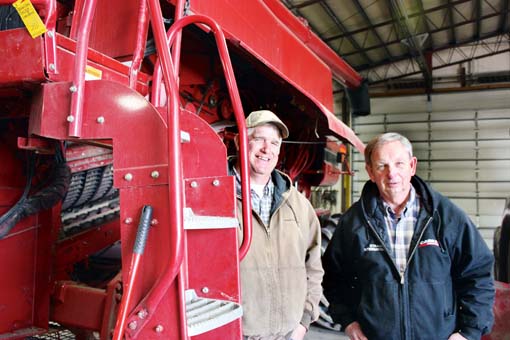 Dennis Swenson and Chris Short are neighbouring farmers at Assaria in Kansas. Chris is a fourth-generation farmer whose family came to Kansas from Britain in the 1900s. They started with a quarter section (160 acres) of land bought from the railroad, but have now expanded that to 1,600ha (4,000 acres), of which 400ha (1,000 acres) is owned. Unusually, a quarter of it is irrigated with water from a local river.

Dennis farms a similar acreage about four miles away.

“It’s dryland wheat, as it was when my Dad and Grandpa farmed it,” he says. “In a good year it can give you 60bu/acre (4t/ha).” Both farmers also have some difficult clay land too, described locally (and colourfully) as “Tiger Shit”.

Wheat was pretty much what every farmer grew in this area 20 or 30 years ago, but the rotation has been extended to include more and more sorghum and soya beans. Both farmers operate a conventional tillage system, with four passes with a cultivator to get a good seedbed.

They also have an unusual joint diversification, too, which involves buying used combines, refurbishing them and then selling them on again. “We started doing for ourselves in 1988,” says Chris. “There was no point having a $300,000 combine sitting around for 10 months of the year.”

As the years went by, they started refurbishing more and more combines. “We just deal with Case combines,” says Dennis. “They can be as old as 15 years and the newest is a 2009 model.”

“We buy between 25 and 30 combines a year. Some come from auctions and others from dealers,” says Chris. “Farmers buy the combines at any time of the year, though mainly towards the end of the year when they can set the expense against profits.”

The business buys combines mainly from Oklahoma, Indiana, Iowa and Illinois and sells to Texas, Colorado and Nebraska. “We try not to compete with dealers. We don’t advertise and 60% of combines are bought by word of mouth.”

The staff of five is able to fix just about anything on the bought-in combines, though they will refuse ones in poor condition. The biggest problems come from what’s sarcastically known as “ingestion of foreign material”, particularly the big stones that get pulled in during soya bean harvesting, when the knife virtually shaves the ground.

Perhaps unsurprisingly, the business has diversified too, with a custom combine business and tractor repair service offered to local farmers from a service truck. There’s a lot of night-time harvesting, so the service truck operates from 7am through to 1am.