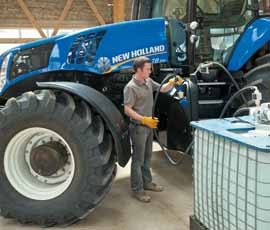 Every other year, when the vast Agritechnica show comes around, we’ve come to expect a spate of new products. But this year there’s even more activity than ever as manufacturers launch tractors and other self-propelled machines equipped with new engines to meet tough emission standard regulations introduced this January.

The new rules apply to all engines with power outputs between 174hp and 750hp, and cover tractors, combines, self-propelled foragers and sprayers. With stocks of the previous engines now dwindling, most manufacturers are now introducing complete new ranges to comply with the legislation.

So what are the new rules?

They are called Stage 3b in Europe and Tier 4 interim in the USA. Confusingly, manufacturers in the UK use one or the other and sometimes both titles. The new rules force engine makers to reduce the soot in exhaust gas – known as particulate matter (PM) – by 91% and nitrogen oxides (NOx) by half, compared with the current levels.

Amazingly, these levels of NOx and PM are now just 3% of those permitted in 1996. However achieving these reductions has presented an enormous challenge to engine manufacturers.

What are the main changes to the engines?

The market has essentially polarised into using one of two design strategies, neither of which trips off the tongue. They are Selective Catalytic Reduction (SCR) or cooled Exhaust Gas Recirculation (EGR).

What does SCR involve?

SCR uses high combustion temperatures to minimise particulate matter production. But this increases the levels of NOx, which it then deals with by treating the exhaust gases after they leave the engine.

To cut the NOx, a small amount of urea (3-7% of the diesel volume) dissolved in water (called AdBlue), is injected into the exhaust gas flow before being treated in a catalytic converter. Some designs also employ something called a Diesel Oxidation Catalyst (DOC) to pre-clean the gas before it reaches the catalytic converter.

OK, so how does EGR work? 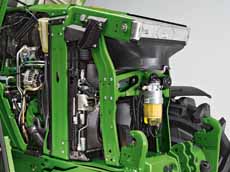 EGR uses cooler combustion temperatures, which reduces the NOx generated in the engine. This increases the levels of particulate matter, which are then physically filtered out of the exhaust gas.

It works by using a valve to divert some exhaust gas, usually from a variable geometry turbocharger, back into the combustion chamber. This depletes the oxygen in the fresh air in the cylinders, which results in cooler combustion – cutting NOx production by about 50%.

Exhaust gas that is not recirculated first exits through a Diesel Oxidation Catalyst (DOC) which uses a catalyst to convert the hydrocarbons and carbon monoxide into water vapour and carbon dioxide.

The particulate matter content is captured by a Diesel Particulate Filter (DPF), which can cut emissions by the required 90% by essentially trapping the PM and oxidising them by burning.

What are the advantages of the two systems?

It depends who you talk to. Tractor makers using SCR claim it is less complex than EGR and that it doesn’t require any extra cooling packages. Also because it’s an after treatment, the engine can be set and optimised for performance and fuel economy at the same time. Tests do show better fuel economy compared with the previous engines.

The main advantage of employing cooled EGR, claim its protagonists, is that it doesn’t require another liquid or delivery system and is a proven system in high load situations. While the DPF does require periodic maintenance, there is no extra cost or inconvenience associated with having to source, store and fill another fluid.

What about the drawbacks?

SCR requires an extra tank and an AdBlue dosing system. Moreover, users need to not only purchase and put an extra liquid into an additional tank on the machine, they also need to store it carefully because it is sensitive to high and low temperatures and can deteriorate over the course of a year.

The particulate filter needs regular cleaning, but this is usually an automatic process which uses high exhaust temperatures (or an extra burner) to burn them off. Users don’t need to instigate this process and won’t even notice it’s happening.

Very clever, but how much is this adding to the cost of tractors?

Manufacturers are reluctant to quote an actual cost or even a percentage increase for the additional engine technology. But as everybody has to comply, the price rises should be roughly the same for all makes. EGR and SCR technology is said to cost about the same.

All manufacturers are, however, cushioning the blow with the addition of extra features on their new Stage 3b compliant machines. But to answer the question, expect to pay 8% to 12% more (at the very least).

How does this affect fuel consumption?

Tractor makers employing SCR and EGR both claim fuel consumption savings on their Stage 3b-equipped machinery, as proven by the independent DLG organisation in Germany

Can I still buy a machine without this technology?

Yes, but you need to be quick. The rules apply to the engine, not the machine and manufacturers were allowed to hold stock engines to fit to equipment in production. But the unexpected rise in demand this year means these stocks are now running low – hence the rash of recent new launches.

Is servicing more complex or costly?

John Deere, the main user of EGR systems on its tractors, says the Diesel Particulate Filter (DPF) working life depends on use, but is likely to need a thorough clean at 5,000-6,000 hours. A similar interval is expected for the Diesel Oxidation Catalyst (DOC). Cleaning is a specialist job, so John Deere is planning to provide a service exchange service for both the DPF and DOC. Cost will be about £800 for the pair.

Manufacturers that employ a DOC in the SCR system, however, say this and the catalytic converter are maintenance-free and should last the vehicle’s lifetime.

What about oils and change intervals?

John Deere recommends the use of its Plus-50 II engine oil for its EGR-equipped engines, which permits a change interval of 500 hours. A typical dealer price is £61.50 for 20 litres or £586.60 for a 205-litre barrel. If this is not used the oil change interval drops to 250 hours.

Massey Ferguson, which uses SCR on its high power tractors, says the engine oil change interval is 400 hour or 500 hour, depending on range, using recommended oil meeting the API CJ-4/ACEA E9 standard. A typical dealer cost for this is £66.57 for 20 litres or £555.06 for a 205-litre barrel.

Is this it, or are there more rules on the way?

Sorry, but there’s more to come. Stage IV/Tier 4 Final for the 175hp to 750hp power bracket comes into effect in 2014, reducing PM and NOx emissions to near-zero limits. This requires an additional 80% cut in NOx from current levels.

For engines generating powers from 75hp to 175hp the Stage 3b and Tier 4 Interim regulations come into effect in January 2012, followed by the Stage IV Tier 4 Final limits in January 2015. Emissions levels in this category, however, are less severe.


AdBlue – all you need to know 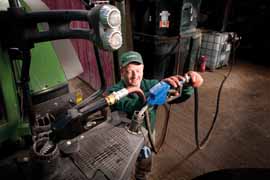 AdBlue is a trade name for AUS32 – an aqueous urea solution of about 32.5% urea and 67.5% de-inonised and demineralised water. It is injected into the exhaust gases and, as it passes through a catalytic converter, it prompts a chemical reaction that converts nitrogen oxide (NOx) into nitrogen (N2), carbon dioxide (CO2) and water vapour.

Where can I buy AdBlue?

It is widely available through fuel suppliers and machinery dealers as well as garage forecourts and service stations. The simplest and easiest answer will be to buy it from the dealer who supplied the machine.

Is AdBlue mixed in the fuel?

No, it’s held on the machine in a separate tank, usually next to, or integrated into the fuel tank with a separate, usually blue, filler cap. It is injected into the exhaust gases after combustion.

There are no statutory storage requirements for AdBlue and it does not need to be kept in a bunded store. However it has a typical shelf life of six months to a year, freezes at -11C and must not be kept at above 30C.

How much AdBlue does an engine consume?

About 3-6% of the diesel consumption, so about 1 litre of AdBlue for every engine hour. Independent tests (see above), however, show consumption of 4.6% and 6.9% AdBlue in tractors with SCR in tests (54-70 litres of AdBlue per 1,000 litres of diesel). 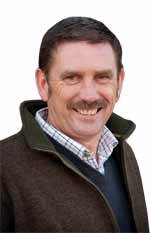 The need to top-up with AdBlue as well as diesel is no hardship, says Simon Beever, farm manager at Willerby Wold Piggeries, Staxton in North Yorkshire. The farm has used the fluid in three different SCR-engined tractors for the past two years and, he reports, in that time there have been no problems.

“We first encountered AdBlue and SCR engines in 2010 when we hired a Valtra S352 from our local dealer, Wilfred Scruton,” says Mr Beever. “This was followed by another Valtra – an S322 – and now we own a Fendt 939 Vario SCR. All three use SCR and we have never had any problems with the system or fluid. We didn’t specifically ask for the SCR when we hired the tractors, but were not particularly concerned about it when the first one arrived. Scrutons supplied a 1,000 litre IBC container of AdBlue with the hire and simply charged us for what we used. It came to about 35p/litre at the time.”

The arable side of the 1,133ha operation grows oilseed rape, which is sold off farm, while the spring barley, winter barley and winter wheat all go into the farm’s mill for conversion into feed for its own pig, beef and chicken enterprises. The amount of manure and slurry generated by the livestock side of the business means the plough remains the primary tillage tool, followed by drilling with a 6m wide Amazone Avant Profi power harrow/drill.

With the arrival of this large combination came the need for another larger tractor – the hired Valtra S352 in 2010. Experience of using this and the following S322 model meant Mr Beever had no hesitation to continue with SCR when it came to purchasing a new Fendt 939 Vario SCR. Arriving this season, this is employed mainly to haul and inject slurry with a new, high capacity tanker and 24m wide dribble bar. It’s also used to power the drill combination.

The Fendt is expected to clock up 1,500-2,000hrs each year, so the farm now has its own 1,000 litre IBC container of AdBlue. The tractor will consume all of this in a year, so there is no problem with it going off in that time. Currently the IBC is kept under cover by the diesel tank, but over winter Mr Beever plans to bring it inside to protect the fluid from frost.