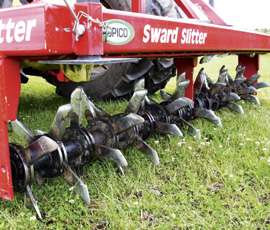 The benefits of using a pasture aerator to encourage spring growth and sward recovery after heavy grazing or silage cuts has convinced a growing number of grassland farmers that owning one of these machines is a worthwhile investment.

Compaction caused by the weight concentrated through the hooves of cattle, not to mention the repeated passage of increasingly heavy tractors and machinery, reduces the ability of grass roots to “breathe” and prevents water percolating through from the surface.

The resulting poorer sward growth and increased poaching can be alleviated by routine use of a slitter, which deploys its tines or blades to cut through compacted layers of soil and open up fissures that allow better drainage and healthier grass.

Moreover, as an implement providing a remedial treatment with long-term benefits to soil structure and the efficient use of nutrients, some Rural Development Agencies see the purchase of grassland aerators as worthy of grant aid under the Rural Development Programme for England, as do similar administrative bodies in Wales and Scotland. Little wonder, then, that together with the increased imperative to make best use of increasingly costly fertilisers, these implements are proving a popular buy.

There is certainly no shortage of choice, as the accompanying table reveals. And differences between one machine and another are often subtle.

The most common format has blades shaped like those of a Stanley knife bolted to a single or double flange on an axle tube. They may be “hardened”, as some manufacturers describe them, or cut from the durable Boron steel, as on the Ritchie Aerator, to give them hard-wearing service.

Penetrating the surface, working their way through the root zone and piercing any compacted layers, leaves a field surface perforated with extended slits. Chamfered trailing edges to the tines can help them withdraw cleanly without too much disturbance of the sward.

Twose of Tiverton offers a choice of tine number on its Aerator, as does McConnel for the Pasturator.

The fissuring effect can be increased on many of these implements by setting the axle at a slight angle, usually by repositioning the pillar block bearing assembly at one end of the tine tube to different holes on the frame. AWS versions of the Aerway slitter differ in having the tube mounted on a pivot frame with quick and easy pin-and-hole angle adjustment.

Bridgeway Engineering has developed an alternative tine design to give increased soil-working effect. The patented CAT – cut and twist – tine is said to open up the root zone more thoroughly for increased aeration.

An altogether different tine arrangement is used on the Aerworx machines, which are based on a North American design. A large diameter drum carries wide 15cm or 20cm (6in or 8in) blades arranged in a spiral to open up swards.

Attractions include fast operating speeds of 8-12kph and the ability to fill the drum with water to supplement an already significant standard-build weight.

Using water for ballast is also a feature of several other aerators. The Grays Pasture Slitter, built these days by James Weal & Sons, has a tine drum that can be filled, while the Glenside OxyGenerator comes with a set of 200-litre plastic barrels that can add 800kg to the 3m model and 1200kg to the 5m and 6m versions.

David Ritchie Implements offers removable steel water tanks that add 200kg apiece plus a further 700kg when filled, while K-Two’s 6m folding Aeravator has a built-in water tank that can be used as an alternative to a weight tray on the 3m model.

Anything suitable that comes to hand is the ballasting option for most implements, typically concrete blocks, bags of sand or scrap metal on the ballast trays built into the frame, or the deep ballast basket arrangement of the Quantock Slitter.

The Ae-Ro II slitters from Agribiz can have tractor suitcase weights slotted on to the frame, while Opico’s Slitmaster can be had with spindles and bespoke steel weights in place of the standard ballast tray.

While the majority of aerators go out as 3m implements, there is growing demand for bigger units that take advantage of available tractor power to cover the ground more quickly.

There are several 4.5m and 5m models available, with either a rigid or folding frame – a simple swing-round manual folding arrangement is used for the 4.5m Quantock Slitter – and there are 6m folding versions in both mounted and trailed formats of the Agribiz Ae-Ro II, Bridgeway Grassland Aerator, Browns Agricultural Slitmaster, Glenside OxyGenerator, K-Two Aeravator, Opico Sward Slitter and Stamford Agricultural Services Field Aerator.

Browns and Opico also produce front-mounted aerators for users who like to perform two operations at once – by running a flexible tine grass harrow (with or without seeder) on the back of the tractor, for example.

Another two-in-one option is provided by the pasture aerators adapted for slurry application. This has two attractions – the ground is aerated and conditioned while slurry is applied; and the perforated surface encourages more rapid absorption of the material.

Glenside Group settles for a simple dribble hose arrangement on its 6m OxyGenerator and there are low trajectory splash plates on the 7m Gen-Til heavy-duty aerator from Wox Agricultural. Bridgeway Engineering fits rubber dribble outlets, while Stamford Agricultural installs a set of trailing shoe applicators on its machines.