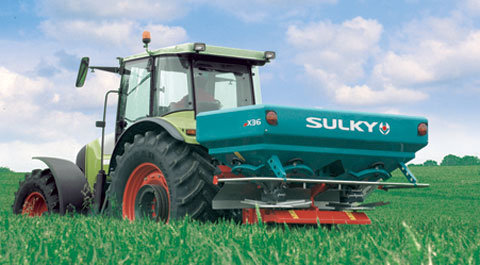 Growers aiming for the ultimate in controlled fertiliser application can put spreader on-off switching in the hands of a computer that, in some cases, will also adjust working width in irregularly-shaped fields to minimise wasteful overlaps.

The technology harnesses the precision and reliability of GPS services and combines it with software that digitally reproduces the operating characteristics of a spinning disc fertiliser broadcaster.

Once a circuit of the field has been completed to map its perimeter, the spreader control system can be left to its own devices, automatically switching off the flow of material to the discs on approaching the headland and turning it on again when departing.

While mimicking the operation of GPS section control on a wide-boomed sprayer, applying “section” and full-width on-off control to a fertiliser spreader is more complex, as Simon Brown of Amazone explains.


“Things are complicated by the fact that fertiliser is thrown way beyond the ‘working width’ of the machine to achieve the double-overlap application,” he points out. “Also, fertiliser is thrown to the rear of a broadcaster almost as far as to the side, so the ‘switch off’ point when reaching a headland is therefore different from the ‘switch on’ point when starting the next run.

“The individual spreading characteristics of different fertilisers also has to be taken into account since that affects the throw to the rear as much as to the side,” he adds.

Engineers at Amazone and Kverneland Group reckon to have cracked the problem, to the degree that both manufacturers have introduced full-feature GPS spreader control systems.


Others are likely to follow – spreader partners Kuhn and Rauch, for example, are understood to be working on a similar system for the Axera hydraulic spinner broadcasters.

Sulky, whose spreaders are imported by Reco, has opted for an intermediate solution at this stage; its Stop & Go system provides automated headland on-off control and half-width shut off.

The trailed spreaders manufactured by Güstrower and distributed in Britain by Ryetec Engineering can be equipped with Super+ Headland Management for auto switching on and off at the start and end of each run up the field.

Amazone’s GPS-Switch system can be used with hydraulic disc drive versions of the ZA-M mounted and ZG-B trailed spreaders. It automates an existing facility for manually adjusting the working width in steps on the move, while adding automatic headland shut-off and start-up.The system requires the GPS-Switch terminal, which can also be used for field guidance when GPS-Track software is added, and a GPS receiver on the cab roof. Together, these provide the necessary position data and operating instructions to the Amatron+ spreader control terminal.


Kverneland’s new GeoControl software package, which includes section control and variable rate application for spreaders, sprayers and seed drills, is available on the group’s IsoMatch Tellus terminal. It can then operate Kverneland Accord spreaders equipped with weigh cells and the GeoSpread actuator kit.

The Tellus twin display terminal processes the GPS signal and operates all spreader functions; and because it conforms to the ISOBUS protocol for the way it manages, communicates and displays information, it can also be used to operate any other ISOBUS-compliant implements on the farm.

The GPS-Switch and GeoSpread systems are programmed with the spreading width chosen and essential GPS parameters such as the distance between the position of the GPS receiver and the discs.

To record the field boundary, they both require a tour around the perimeter in “manual” with the border setting engaged. Thereafter, operation is fully automatic: the position processing software recognises where fertiliser has already been spread and switches the flow of material to the discs on and off at headlands and adjusts the spreading width where necessary to avoid over-application.

On the Amazone broadcasters, spreading width is narrowed in three steps either side by altering disc speed. A machine spreading to 36m will therefore close down in 6m steps.

Within the body of the field, the spreader operates normally with both discs running at the optimum speed. But when it moves into a location where fertiliser has already been applied, disc speed on one side is reduced from 720rpm to 550rpm, then 400rpm and finally zero to trim the spreading width and minimise any overlap.

At the same time, the hopper outlet slide for that disc is adjusted to reduce the flow of fertiliser in proportion.

With pto drive to the discs, GeoSpread versions of the Vicon and Kverneland Accord machines must use a different approach.

Normally, working width is set manually by adjusting the dosing plate on each side to move the fertiliser drop-on point to the disc. Moving it outwards reduces the centrifugal force generated by the vanes and therefore the spreading width.

On the GeoSpread versions, the dosing plate is moved by an electric actuator so that adjustments are made automatically on the move. A second actuator alters the flow rate from the hopper to maintain the correct application rate.

Both systems allow the operator to choose the amount of overlap permitted within a “section” before it is switched – from zero percent (ie as soon as overlap occurs) to 100% (ie only when the ‘section’ is fully overlapping). For fertiliser application, where the full rate is built up in layers, a 50% setting would be a reasonable compromise.

Amazone recommends switching to manual mode before backing up to avoid unintentional spreading but Kverneland’s GeoControl software ignores such manoeuvres and also isolates the machine once it moves out of the field boundary.

The machines come as standard with the Vision X terminal produced by RDS Technology, which provides auto calibration and rate control, plus other facilities such as in-cab activation of the Tribord boundary spreading mechanism. This alters the right-hand disc feed-on point to bring different-shaped vanes into play and reduce the spreading width on that side.

For headland on/off management, the terminal is linked to a half-width section shut off controller and a GPS receiver/display – Sulky offers the hTeeJet Matrix 570 but says the Stop & Go system is compatible with a number of similar devices.

“On the spreader, electric actuators replace the hydraulic cylinders normally used to open and close the hopper shutters,” explains Richard German, Reco service engineer. “With the required offsets programmed to account for the machine’s spreading characteristics, the Stop & Go system will then open and close the shutters automatically when departing and approaching the headland.”

In triangular shaped areas, the system can use the Tribord mechanism to ease off the spreading width and so reduce over-dosing but only to the right-hand side.

These spreaders, distributed in Britain by Ryetec Engineering, have an electrically-controlled hydraulic drive for the hopper belt that feeds the spinning discs, so adding the Matrix Pro unit also provides variable rate application capability. GPS mapping and steering guidance can also be used, along with a remote camera feed to monitor the spreading mechanism.

Ryetec makes the point that no modification to the standard spreader is required and there are no additional moving parts. It adds that Super+ starts and stops spreading in a gradual manner as opposed to an immediate full-rate on and off, resulting in more even application.

Vicon product manager Andrew Bowley believes growers will be attracted by two main benefits of automatic spreader control – a further improvement in application rate accuracy across the field and an easing of the operator’s workload.

“There is also an environmental advantage from minimising over-dosing, as well as cost savings – the scale depends on the size and shape of fields worked,” he says.

In a regularly-shaped field with perfectly parallel tramlines, savings in fertiliser would be minimal; but fields are never square or rectangular so there are potential savings in every one.

How much depends on their size and shape; in relatively small irregularly-shaped fields, manufacturers calculate savings of as much as 10% by minimising over-application on short-work and at headlands. A figure of 2-5% is a more typical average.

Kverneland charges £1,995 for a licence key to unlock the GeoControl software on its IsoMatch Tellus terminal and £675 for the GeoSpread licence.

The headlands-only Stop & Go system adds a little over £1,275 to the price of a Sulky X36 spreader.

Amazone calculates that if an annual fertiliser bill of £270 per hectare and material savings of 3-5% are assumed, the £4,205 spent on a complete GPS-Switch system will pay for itself after spreading across 70-123ha or so. Make use of an existing GPS receiver, which reduces the price to £3,035, and the break-even point drops to between 50ha and 90ha.

Saving fertiliser is not the whole story, though, because automated spreader switching also relieves the operator of having to make judgements by eye – which has become a more difficult challenge now that bout widths of 38m and more are commonplace.

“The greatest attraction for operators covering a lot of ground using a wide-working spreader will come from being able to leave the switch-on, switch-off decision to a computer,” Mr Bowley adds. “It will make the job less tiring and also allow spreading to continue in the dark. Also, this automation allows the job to be entrusted to a less skilled operator if necessary.”

It should also allow operators to work with confidence early in the morning and late into the evening to increase seasonal capacity without the benefit of daylight.