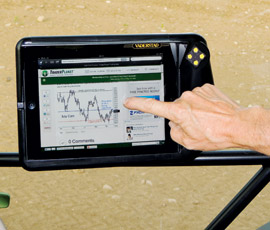 Equipment manufacturers are latching on to the appeal of smartphones and tablet computers as sources of information and implement control.

The Apple iPad – and maybe other tablet computers too – look set to take on a professional role in the tractor cab when Väderstad launches its purpose-designed implement software and in-cab holder at the Agritechnican show in November.

The Swedish company’s E-Control system will provide display and control functions for the Väderstad Tempo precision seeder at first, but will be developed for the company’s other seed drills.

“I believe this is game-changing technology for operators,” says Crister Stark, Väderstad’s chairman. “Besides providing easy control, monitoring and data transfer, it brings the iPad’s proven role as a computer for internet access and professional apps into the tractor cab.”

With the Tempo control screen displayed, operators can use either the touch screen or buttons on the holder to change settings. There are four finger buttons on the back of the device to select different functions and four thumb buttons on the front to scroll through settings.

The buttons communicate to the iPad by wi-fi, so there are no electrical contacts to be affected by dust or moisture. Communication is also by wi-fi between the iPad and a gateway computer housed on the machine’s drawbar, along with a GPS receiver.

The software records machine data and also spacing and singles accuracy on the Tempo, and the lack of hard wiring means the tablet can also be used out of the cab – for individual seeder unit calibration checks, for example.

It can also be used to identify and order replacement parts using Väderstad’s online E-Parts service, also due to be launched at Agritechnica.

“This provides a 3D view of our machines that can be rotated and expanded to help identify correct part numbers,” explains Mr Stark. “One tap and the part is placed in the shopping cart.”

The operator can also access details of past orders and place a new order from the field for delivery to his farm or local dealer.

Tyre and load apps set to hit the ground at Agritechnica

Anyone using a smartphone running Android or Microsoft Windows operating systems will be able to make use of Trelleborg’s Load Calculator app to be launched at Agritechnica alongside a more comprehensive Tire Efficiency app.

The Tire Efficiency app highlights the potential for field performance improvements and cost savings that comes from fitting larger and/or lower-profile tyres. The latest version has a wider selection of tractor sizes and applications.

Farming in the age of the smartphone