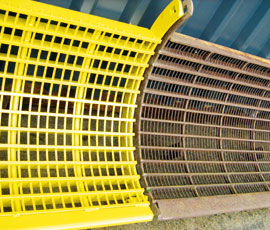 Combine concaves have always had a tough life, but with faster forward speeds and higher throughputs they’re now having to work harder than ever. But Ken Graham Engineering at Stradbally, Co Laois, Ireland reckons its concave could help.

It’s not a new design. The firm has been making them since 2003 and has sold some 400 units – almost all of them within Ireland. But it has now decided to market the concave in the UK.

What’s different from the standard concave that’s fitted to your combine? “Most concaves are designed for all markets, but this is a high-output model especially for the UK market,” says the firm’s David Graham.

“So the heads are threshed slightly quicker and the straw goes through faster. The straw isn’t made any worse for baling either and it should also reduce fuel consumption.”

Most farmers would be able to fit it themselves, he says, or else get an independent fitter to help them. There are versions to fit all current combine models and most recent models too.