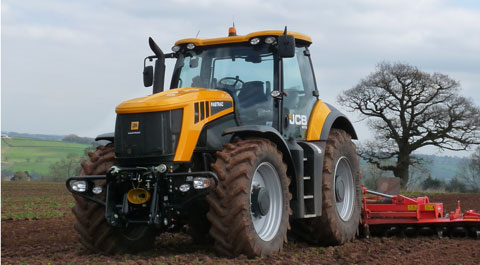 With the new engine and semi-mid-mounted cab, the 8310 is a good all-rounder. It may not be a completely jump-on-and-go machine, but you’ll only have to be shown once.

JCB has barged its way on to the big boys’ 300hp scene with its new 8000 series Fastracs. Oliver Mark found out whether the tarmac-friendly tractor is up to the job in the field.

The arrival of the new 8000-series models means that JCB has at last taken the plunge into the muscle-laden 300+hp category. It still has the armchair-style comfort of full suspension and sophisticated braking, but the maker reckons it’s now a serious front line cultivation tractor, too.

The biggest change has come up front. Out goes the dependable old 248hp six-pot Cummins engine and in comes a new Sisu 8.4-litre block. A few extra ponies have been squeezed under the bonnet since the 8250, too, and JCB’s computer boffins have updated the in-cab computer.

Aesthetic changes are slight – it’s still yellow, has a rear(ish) mounted cab and bigger back wheels.

It’s by far the biggest Fastrac ever made and is probably better suited to field, rather than road, work. Clamber up the four steps and you soon realise it’s a bit of a brute.

But the new Sisu block is narrower than its Cummins predecessor, so from your perch in the cab you get a good view to the front linkage. Apparently a few centimetres have been shaved off the turning circle, too, although it’s hardly noticeable.

JCB has plumped for a Valtra-derived Sisu six cylinder, upping power to 306hp.

These days’ tractor designers really earn their keep when it comes to burying all the emissions-reducing clutter. On this occasion the big DOC dustbin is packed neatly under the bonnet so the stack doesn’t hinder the view forward/left too much.

It’s meant the blue-capped Adblue tank is now nestled in the middle of a 550-litre diesel reservoir and the cooling pack at the front is smaller than you might expect for a 300-odd-horsepower tractor.

This time the influence comes from Fendt. With a bigger vario V-tronic transmission than the old ML260, the 8000 series has the same drivelines as both the Valtra S-series and Massey Ferguson 8600.

There are two ranges – the oddly-named “low” range (which still manages speeds from 0-40kph) and “high” that extends from 0-70kph. Both can be selected by a button on the armrest.

Within the two ranges are three drive modes. There is a smooth-as-you-like CVT-style transmission and a 10-shift powershift mode which, when the joystick is nudged left and right skips almost unnoticeably up and down the range. We found this was best for power harrow work.

The third is a manual mode which sees engine rpm controlled by the throttle and transmission through the joystick. It’s pretty simple to adjust joystick sensitivity on either the armrest or touch screen as well.

There are also two cruise control modes – ideal for non-rev dependant cultivation work. You can set the forward speed that, once reached, drops engine rpm down to peak torque (1,450rpm) and efficiency. Come to a heavy patch or hill and the tractor will muster some extra power.

There’s also a rev-hold mode – the operator can set forward speed and the amount the engine rpm can drop by before it sacrifices speed to maintain rpm, which we found handy for pto work.

The Fastrac is the only primary cultivation tractor to get full suspension. There are coil springs at the front and at the back is hydro-pneumatic suspension which compensates for a rear load. It was noticeable, too – you can see and feel the tractor move some of the weight to the front axle when you lift the linkage.

The four-post cab sits almost at the back of the machine and is pretty comfortable and spacious. There are a few cubbies but strangely no refrigerated compartment.

It’s pretty quiet in here, though outside there’s a bit of a high-pitched whine. The armrest and joystick dominate the right-hand side of the cabin and house all the important functions like electro-hydraulic spools, drop rate and forward/reverse.

You do need to be computer literate, though, because almost everything can be accessed through the touchscreen.

The view outwards is mixed. To the rear it makes the most of the cab position to see all the vitals. Trying to spot anything to the right is not so easy – you’re forever ducking and bobbing your head to see between the various screens.

As cab computers go, JCB’s is fairly easy to fathom, though the multi-colour touch-screen has a slightly ‘90s video game look about it. Like the 3000 series, there are big colourful shortcut keys which are handy for homing in on the required setting.

Up to five headland management sequences can be stored. Each can hold up to 15 functions, which were easy to modify.In heavy draft conditions when the tractor is in auto and starts to scrabble, the Activ Traction system is effective in reducing engine revs and upping the transmission ratio to reduce wheelslip. 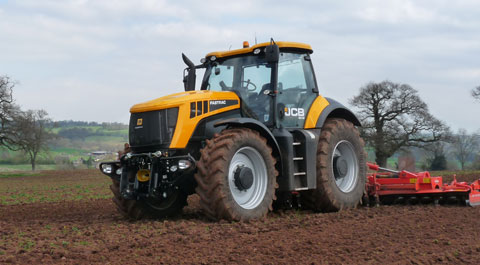 We took to the field with a 6m Kuhn power harrow. It was a bit like Goliath doing bicep curls with a can of coke, though, as the tractor didn’t have too much bother doing the work.

Set in cruise control, we found the revs hover around peak torque at 1,500rpm to minimise thirst and noise. It’s quiet in work and you have to resist the urge to stamp on the throttle just to make sure the engine’s still going.Handling is a tad clumsy, though – turning circle isn’t as tight as it might be and it certainly feels like a big tractor.