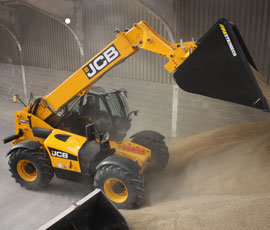 JCB has unveiled a new high-capacity telehandler designed specifically for the agricultural market.

Due for its official launch at next month’s Agritechnica show in Germany, the 550-80 is a 5t machine capable of reaching up to 8m.

The company says that although the development of bigger and bigger loaders is inevitable, demand has also been driven by individual customers looking to up the capacity of their materials handling operations.

Big arable operations and sugar-beet contractors, in particular, have a requirement to speed up lorry-loading and with a 4.6cu m bucket up front, the 550-80 certainly has the capability to do that.

The other area where the new machine is believed to have an opening is with big biogas plants, where there is the need to shift large volumes of material into the digester every day. The key markets for that are currently Germany and Austria. However, with biogas plants in planning all over the UK, JCB believes there will be strong demand here, too.

The new Loadall uses one of JCB’s own DieselMax engines – a 4.4-litre four-cylinder unit pumping out 145hp. This drives a four-speed powershift transmission, rather than the six-speed box used in the firm’s other high-spec machines.

But more engine power doesn’t necessarily mean a machine can work any faster, even when it’s lifting an extra tonne a metre higher than any previous JCB machine. According to the company, the design team were briefed to concentrate on speeding up boom cycle times – ie, the time is takes to lift, dump, lower and crowd the bucket.

To shorten the “up” cycle, pump capacity has been increased to 145litres/min but this has little effect on the “down” stroke so the company has kitted the boom out with wider diameter “hi-flow” pipework and valves.

In addition, the introduction of a Z-bar type linkage at the boom headstock is said to have upped tear-out force to 6.5t – a 50% increase over the previous ag-spec range-topper, the 541-70.

From the beginning of next year, all JCB agricultural products will be fitted with GPS telematic systems to allow dealers to remotely diagnose faults and enable the police to track stolen machines. 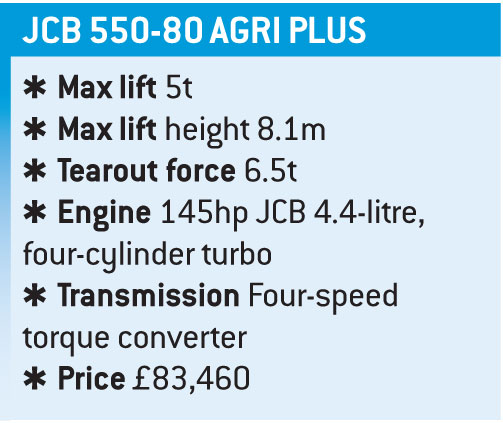 • It’s 35 years since JCB’s first Loadall appeared on the scene and the company now has 50% of the UK telehandler market. At its Rocester headquarters, the firm has opened a new £5m exhibition charting the rise of the Bamford family’s machinery business from the 1800s to the present day. It includes a mock-up of Joseph Cyril’s garage, where he first started knocking out tipping trailers, the company’s DieselMax land-speed record car and a life-size sculpture of a JS200 360 digger made entirely from steel reinforcing bar. Well worth a visit.