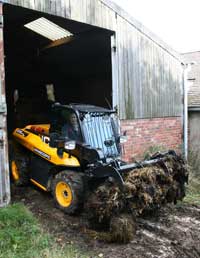 JCB officially launched its smallest ever telescopic handler this week. Standing just 1.8m tall, the 515-40 Miniscopic Loadall weighs in at 3.5t – a tonne less than its closest sibling, the 520-40 – and measures just under 3m long.

Equipped with 4-wheel drive, 4-wheel steering and powered by a 50hp 4-cylinder 2.3-litre Deutz engine, the Miniscopic is designed to appeal to stock farmers with small sheds and low-ceilinged buildings, as well as poultry and pig farmers.

Traditionally, a chassis is designed to sit directly in the middle of a machine. But, to keep the Miniscopic under 2m, JCB has adopted an offset single-spline arrangement which means the chassis is located on the far right-hand side of the machine, directly under the boom.

Cabs can prove to be a compromise on compact telescopic handlers, says JCB. But, because of the offset chassis arrangement, the Miniscopic has a full-sized cab akin to that of a standard machine.

Because there’s no chassis to accommodate under the cab, the Miniscopic measures 20cm lower in height than the company’s Robot skidsteer range, and indeed any of its existing range of industrial forklifts or compact Loadalls.

Although the Miniscopic shares the same family name as the larger models in the Loadall range, the similarities end there, says JCB.

Unlike other Loadalls, the Miniscopic will be manufactured in the firm’s Cheadle factory alongside ranges like the Teletruck forklift and the 403 compact loader – for the simple reason it shares many of the same components such as independent wheel motors, transmission and Deutz engine.

Drive is delivered through a two-speed 20kph hydrostatic transmission with four individual wheel motors, giving a tight turning circle of 2.8m. Auxiliary hydraulics with a 46litre/min pump are fitted as standard with a detent for attachments that require constant flow.

With a reach of 4m and a lift capacity of 1.5t at full extension, it should be man enough to cope with jobs like mucking out and feeding, but manoeuvrable enough to carry out more compact duties in structures like greenhouses, says the company.