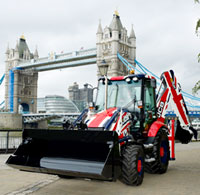 JCB has launched its latest range of 3CX and 4CX diggers, the first of which toured the landmarks of London in patriotic Union flag livery to mark the company’s 65th anniversary.

The Staffordshire company has invested £20 million in the new range, which will cut customers’ fuel costs by up to 16 per cent, it reckons.

The backhoe loader – the construction industry’s term for a machine with a rear excavating arm and front shovel – was pioneered by JCB’s founder Joseph Cyril Bamford in 1953. Today JCB accounts has a market share of this of 41%.

The new 3CX and 4CX models, which have a starting price of £40,000, go into full production next month.

It’s thought that, with the improved fuel efficiency, operators using the digger for an average 1250 hours a year could save more than £1000 on fuel costs.

And in a move that will keep Britain’s army of digger drivers happy, JCB now offers an in-cab drinks machine able to make tea, coffee and soup for those cold winter mornings.