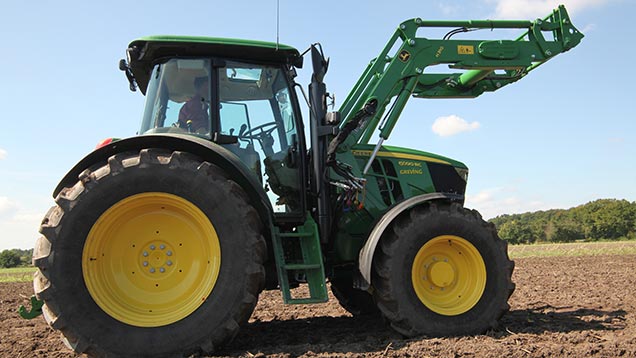 One of the first things you notice when you glance at the 6090RC is that the cab looks too small. The dinky design means there’s precious little room for a passenger and lanky operators can’t shunt the seat far enough back to get their knees south of their armpits. That said, most Deere dealers will adjust the seat rails to free up a bit more room.

You can’t fault it for quality, though. All the plastics are tough and creak-free and the controls fall nicely to hand. Views to all the important areas are good and it’s got the option of a roof window for viewing the loader at height.

We had a bit of a grumble about the low-mounted dash that had us hunched over the steering wheel when working. We’d prefer to see it move with the steering column like it does on 6Rs.

The 6090RC is fitted with Deere’s own four-cylinder engine, which put on a better-than-average performance in our tests.

The book figure for max power is 100hp and was one of just two tractors in the test to have boost. When plumbed into Maha’s test rig, we recorded a slightly less impressive 91hp at the pto with boost engaged. That was still enough for it to equal the McCormick, making them the two most powerful tractors on test.

With boost off, the Deere’s power plummeted to 82hp, though, while the Perkins-powered McCormick only lost two horses. Fuel consumption was just below the group average at 266g/kWh.

The 6090RC was fitted with Deere’s age-old 24-speed PowerQuad transmission. This had the usual clunky shifter with a six-speed gate, a park position and four powershift steps controlled via buttons on the top.

Our tractor didn’t have auto-shifting of the powershifts, but it did have speed matching. This did a decent job of adjusting the powershifts as we notched through the gears.

Overlap wasn’t a strong point though, with just eight gears on offer between 4kph and 12kph with the engine revving at 1,800rpm. The gearstick also sat a bit low and was noticeably notchier than versions fitted on its bigger siblings. It might free up over time, though.

The Deere was one of the few tractors to have options for fettling gearbox setup. Delving into the dash display allows you to engage a soft shift function, as well as setting the powershift ratio when shifting between forwards and reverse.

The 6090RC was pretty straightforward in the four-wheel drive and diff-lock departments. Simple switches on the console flick 4wd and diffs on or off and there are no automatic functions.

The long wheelbase meant it was smooth on the road and it still had a decent 10.5m turning circle.

The 6090RC had one of the most solid-looking back ends, but it wasn’t the best lifter. The Cat 3 link arms might have had the highest lift capacity in the top position at 5.4t, but they were the weakest in the lowest position. Our tractor also only came with one lift-rod adjuster, which made adjustments a fiddle. However, two are standard fitment on UK tractors. The slug-like linkage controller was also easy to use.

In the hydraulic department, the 6090RC cleared up. Max oil flow was the highest on test at 97 litres/min, as was max oil pressure at 203bar. Ours came with two mechanical spools with float and the option of two extras. It’s good that they have flow adjusters outside the cab, too.

On the pto front there were two speeds – 540 and 1,000 – that are adjusted using a lever on the right-hand console. Unfortunately there was no pto automation on our tractor, but there is the option of a basic iTec headland management system.

Deere’s own H310 loader had the highest-average lifting power at just over 2t, edging slightly ahead of the New Holland. Cycle times were decent, but despite the Deere’s athletic hydraulics it couldn’t equal the Valtra’s effort.

We couldn’t fault the Deere’s build quality and the rear hitch and hydraulics were among the best on test. The cab was pokier than we’d have liked, though, and pretty basic too.