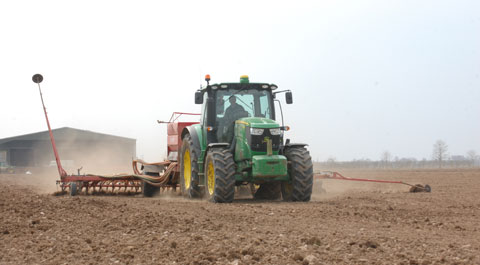 New tractors cost a pretty penny these days so it’s wise to do your homework before dipping your hand in your pocket. Simon Henley visits a farmer in Warwickshire who purchased a brand new John Deere 6150R last October to see if it’s living up to his expectations.

Having operated a fleet of John Deere tractors since 1988 it could be suggested that Colin Fisher’s decision to buy a new 6150R was a given.

But unimpressed by previous John Deere 30-series demonstrators Mr Fisher, who farms at Lindley Hall Farm in Warwickshire, weighed up a number of different options.

“We considered both Massey Ferguson and Fendt, however with Farol of Hinckley on our doorstep, we eventually decided to stick with the devil we know.”

Having reached its sell-by date, the oldest of the farm’s brace of 6920s was traded for the 6150R last autumn.

The JD 6150R was chosen specifically, because it is the most powerful of the smaller-chassis 6R models and a similar spec to the 6920. “We needed a powerful compact machine to work with our Knight 24m trailed sprayer and to use for variable-rate fertiliser application.”

The new tractor has now clocked just shy of 250 hours since it was purchased.

More details and reviews of the 6150R

Mr Fisher rates Deere’s new styling and reckons the cab is also a big improvement. He particularly likes the fact that there’s much more space, the driving position is higher and all-around visibility is good.

Improved in-cab storage space also gets the nod, although he says the floor is still the only place to fit a lunch bag that’s a suitable size for a 12-hour shift.

The cab suspension is also impressive, he says. “Driving through ruts and deep tramlines is no longer a spine-breaking experience and the tractor remains surprisingly stable.”

The longer link arms make it easier to attach implements and can lift considerably more than the 6920. Implements can also be lifted up higher, he says.

The tractor puts power down well in the field and pulls the farm’s five-furrow Kverneland plough with easy, feeling well balanced to boot, he says. “So far it’s been using about the same amount of diesel as the 6920, too.”

Daily service checks are relatively straightforward, even though the bonnet must be unlatched to check the engine oil.

It’s not all been plain sailing though. The cab door is very heavy and the airtight cabin interior can make shutting the door a challenge.

Other gripes include the Bluetooth-equipped CD/radio, which fails to stay in tune and, despite having been replaced under warranty, still doesn’t function properly. The headlights also seem to have a mind of their own and switch on and off inadvertently.

Mr Fisher has also found that the tractor is very easy to stall if the engine drops below 1400rpm.

The automatic function of the tractor’s AutoQuad transmission doesn’t seem to compliment the engine’s torque characteristics, he says. “If you adjust the auto mode in the computer to shift for economy, the tractor down-shifts far too late, up shifts too early and under any load, quickly runs out of power.”

Setting it for power also has its problems as the tractor tends to hang on to every shift until the engine is running at full tilt, sometimes quickly up-changing two gears.

This then causes the tractor to bog, so it shifts down again, he says. “In this setting, it never stops hunting for gears and I have found myself reverting back to shifting ratios manually.”

There are a few niggles with the new design, too. Although stylish, the new bonnet rakes slightly forward, making it very difficult to apply a tombstone weight without contacting the tractor’s front grill.

The toolbox too, which is mounted above the fuel tank, is somewhat inaccessible for operators of less than six feet in height.

The question as to whether Mr Fisher is happy with his purchase of a John Deere 6150R, despite a few niggles is easily answered. “Ask me again in six months when it’s done another 1,000 hours and I might have a different answer, but right now it’s so far, so good.”