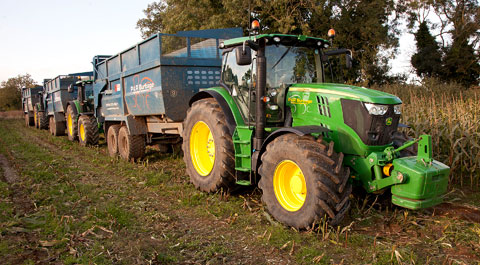 It’s fair to say John Deere has lagged behind a bit in the gearbox stakes over recent years.

While nearly all the other main players in the tractor game have set about developing, with varying degrees of success, semi-powershift transmissions that’ll slot in between ultra complex CVTs and bog-basic mechanical boxes, the green giant has dragged its feet somewhat.

The company has always maintained that between its idiot-proof AutoQuad stick-shifter and silky smooth AutoPowr stepless box, operators have had plenty of choice.

Now it seems that has changed – Deere has developed its own lever-free shifter. We got the chance to try out an early evaluation model alongside two tractors with existing semi-powershift and CVT gearboxes.

Just like the AutoPowr, the transmission home page has a label-less vertical scale similar.

The green bar that makes up most of the scale signifies engine rpm. A blue arrow shows eco engine speed – the minimum engine rpm when you’re up to speed.

Possible because the transmissions are actually rated to 65kph, the tractor will continue to climb up the gears while cutting engine rpm to the set Eco speed.

Deere calls the white arrow the “auto shift engine speed droop”. In layman’s terms that’s the downshift point – when the tractor will decide to drop down a gear as the engine labours.

In full auto mode the tractor will adjust these settings according to the load and speed – all the operator has to do is drop his size 10s on the pedal – but they can also be customised.

The downshift point can be adjusted as a percentage of max engine rpm. With the pto off this can be as high as 40%, but with the pto spinning it’s likely to be a fair bit lower. The eco speed can be changed, too.

We’d prefer to see these figures set as actual engine rpm rather than a percentage. The settings could also be simplified by just offering low, medium and high options.

In truth, the new box behaves pretty much the a CVT from a driver’s perspective, the only difference being that before setting off you select one of three ranges – A, B or BC – with orange buttons alongside the AutoPowr-esque lever.

It’s in its usual Auto slot for most of the time but knock it left and you go into manual mode. Nudge it forward for an upshift and back to drop a cog – much like a TipTronic box.

And similarly to an Audi, the use of the double-clutch set-up has made gearshifts silky smooth. However the Deere box isn’t immune to the standard scourge of semi-powershift transmissions – there are long pauses between range changes. You certainly don’t want to shift when under load in heavy draftwork – any forward momentum is instantly lost and the abrupt halt leaves you getting pretty intimate with the fly-smattered windscreen.

That said, Deere reckons the eight speeds give enough overlap between ranges that you won’t need to change under load anyway.

We found little reason to shift out of auto on haulage duties but when it came to running alongside the forager in BC range (where the box will auto-shift between the top two ranges), we found it kept shifting to C5 meaning the transmission had to rapidly downshift once in the new range to avoid a stall.

In addition, when you back off the throttle it has a tendency to downshift fairly swiftly.

The answer? Run in manual in the field and auto on the road . It’s hardly a biggy – it just means your thumb gets a little more exercise through the day.

A fair chunk of the farming population will be pretty familiar with the basics of Deere’s Command Centre screen.

You can handpick the information you want to be displayed on the home screen, while tapping the transmission shortcut key takes you straight to the gearbox settings.

Here you can tweak various options to get the best from the tractor’s set of cogs.

Thwack the Auto button at the top of the half black, half orange stick and the computer will take care of the shifts.

The point of the powershifts can be adjusted on an easy-to-use sliding scale. With Eco at one end and Power at the other, shuffling the arrow along the scale alters the gearbox’s characteristics.

More power and the tractor will rev harder before upshifting – ideal for lugging around a heavy load.

Anyone that has driven a John Deere tractor built in the past 20 years will be immediately familiar with the workings of the AutoQuad box.

Of course things have changed over time – the shuttle has moved from the right console to the left of the steering column and powershifting is done with buttons rather than a lever.

Auto-shifting was added for the four powershift steps a while back and more recently a de-clutch button has joined the others on the main gear lever.

We love the box for its pure simplicity: select a cog, knock the shuttle forwards and you’re off. The four powershifts give plenty of overlap between ranges but whether having a thumb-clutch makes shifting up or down the gears any easier is debatable.

Like Direct Drive, Deere’s version of a CVT is controlled using a stubby orange stick that can be slid up and down a doglegged channel.

The dogleg provides the first of two set points (the second is at the far end of the slider). These, named F1 and F2, effectively work as quick access cruise speeds that can be adjusted on the move.

Like with Direct Drive, operators can leave the tractor in auto mode or customise the settings (although it will adjust the ratio rather than downshifting).

Both of these control engine rpm and transmission ratio together, but the two can be controlled separately in manual and pedal mode.

We think Deere’s CVT set-up is the simplest to operate out of everything on the market. We particularly like the simple-to-fathom stick running in its two notch slot.

The thumbwheel makes fine-tuning a doddle and, unlike other makes’ nudge-it-and-hope joysticks, you know exactly where you are with it because it stays put where you leave it in the slot. Orange micro-LEDs around the inside of the speedo confirm where you’ve got it set too.

In fact, it’s got to be the most straightforward box to get to grips with out of any. A brighter-than-average spaniel would have it figured out in minutes – knock the shuttle out of park and into gear, ram the stick forward and a gentle dab of right boot gets things moving.

Pull back on the stick and you limit your travel speed and increase the sensitivity of the throttle pedal.

There is also the option of driving in manual mode where revs are control by the hand or foot throttle and the transmission on the stick.