John Deere has topped the sales charts once again, maintaining its position as the UK’s leading tractor brand.

Figures released last week by the Agricultural Engineers Association confirm that Deere continued its dominance in 2005 with over a quarter of the market, having held the top spot since 1998.

So much the same at the top, but there’s been a major reshuffle for the runners up. Massey Ferguson has leapt into second place, upping its market share by 2%.

Having lost sales of nearly 800 units, New Holland has dropped to third place – a major blow for a company which looked close to catching John Deere just three years ago. 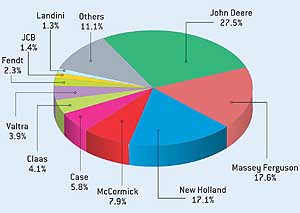 It’s these ‘Big Three’ that account for over two thirds of the sales total. There is then a big step down to the middle-ranks.

Following its resurrection in 2001, McCormick sold 1100 tractors in 2004. The company has held on to fourth place for the second year running, having leap-frogged Case IH last year.

Case’s sales have slumped since the brand’s merger with New Holland in 1999. At that point its sales accounted for nearly 20% of the market and the company occupied third position in the table. It now sells less than 6% of the UK’s tractors and has fallen to fifth in the league.

Since taking over Renault, Claas has seen a small increase tractor sales, thanks, in part, to the strength of its dealer network.

Agco sister-companies Valtra and Fendt follow this and JCB trails behind, having experienced a 33% loss in sales of its Fastrac tractors.

Landini enters the fray for the first time with a 1.3% slice of the cake.

The ‘Others’ category – those companies which choose not subscribe to the AEA – accounts for about 11% of sales. The key contributors being Zetor, Same Deutz Fahr and Kubota.

Zetor says it sold 328 tractors across UK and Northern Ireland in 2005 – a number that would equate to 2.3% of total sales.

Offering Same, Lamborgini and Deutz Fahr brands, SDF claims a 4.4% share of 2005’s tractor registrations, with Same accounting for the lion’s share of this.

Having added 100hp and 125hp machines to its line-up, Kubota has seen its agricultural tractor sales grow and reports to have sold nearly 240 tractors for farm use in 2005 – a 1.7% share.

The average power of all new agricultural tractors sold currently stands at 126.5hp.

Footnote:
You’ll note that the figures relate to 2005 tractor sales. Annoyingly an EU ruling dictates that market share statistics must be published one year in arrears.
The European Commission argues that this ensures the best possible deals for machinery buyers because competing firms do not have access to up-to-date market share information and are therefore unable to fix or inflate prices accordingly.