A farmer from Northern Ireland has beaten competition from 13 other European countries to win a tractor driving championship in France.

Sam Graham from Killinchy took his place on the winner’s podium at the European Drivers’ Championship 2017 after driving a John Deere tractor and trailer through a series of testing conditions on the Michelin Technical Innovation Centre test circuit in Ladoux.

He won by adopting the best overall strategy, combining speed with the lowest possible fuel consumption and lowest soil compaction in the field round the 18km course.

The route was designed to represent the typical daily challenges today’s farmers and contractors face.

Mr Graham competed in a John Deere’s new 6250R tractor riding on Michelin’s latest generation ROADBIB tyres, which were unveiled at the event ahead of their planned 2018 launch.

The runners-up were David Durand from France and Stefan Häkansson from Sweden.

Mr Graham secured his place to compete at international level at the event, jointly organised by John Deere and Michelin, after registering online and winning hundreds of votes to take part.

He said: “Winning the competition was a very pleasant surprise, taking into consideration the skill and effort we all put in.” 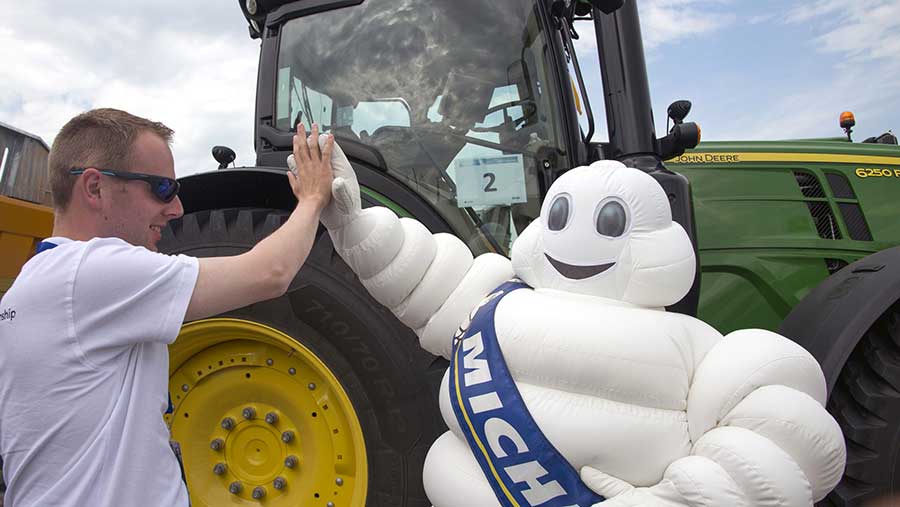 Sam Graham with the Michelin Man

Javier Fernandez, John Deere’s product marketing manager for the new 6R Series tractors, said: “Sam decided to go for the auto-transmission mode, which automatically adjusts the gear ratio and engine speed to get the maximum performance without compromising efficiency.

“It was an event designed to challenge even the best drivers, but he put in a fantastic effort and was a truly deserving winner.”