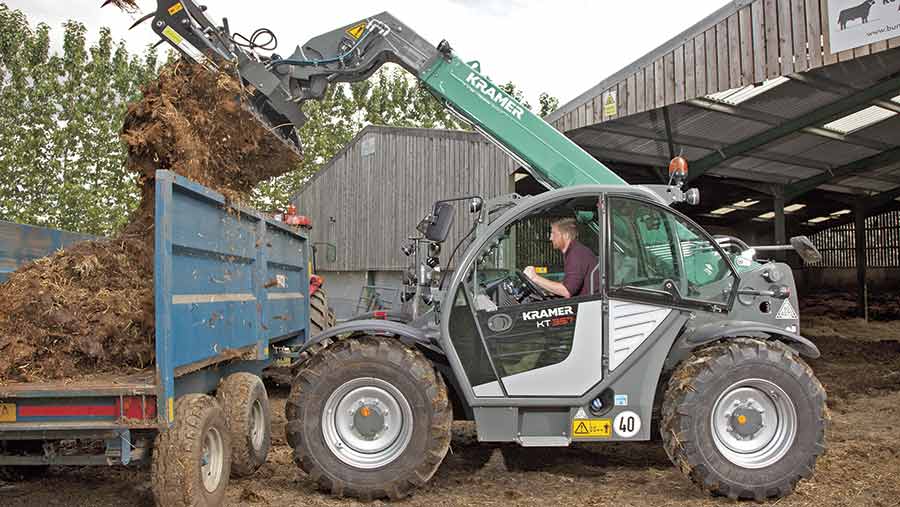 Loader and telehandler maker Kramer has secured new dealers now it can sell its full-size telescopic handlers into agriculture instead of channelling them solely through Claas.

Although the supply deal with Claas finishes at the end of this year, Kramer has been able to promote and sell the machines under its own name from the beginning of June as part of a transition agreement.

In the UK, a number of prominent John Deere and other dealers have seized the opportunity to take on the Kramer machines.

Speaking at the Royal Highland Show, Ian Moverley of Kramer said: “The product is exactly the same as the Scorpion except that it’s turned out in the green and grey colours that we will now use for all Kramer agricultural wheeled loaders and handlers in the UK.

“But our dealer network is changing substantially, with a number of John Deere dealers, who didn’t have a telehandler franchise after Deere withdrew its range, coming on board, and some relinquishing another franchise to come with us.”

In Scotland, Netherton Tractors at Forfar and Glenrothes has signed up, along with Tallis Amos Group, which has branches in the Cotswolds, West Midlands, Welsh Borders and South and West Wales.

Smallridge Brothers in Devon and Doubleday Group in Lincolnshire and Norfolk have also joined the Kramer network, as have Cornthwaite Agricultural in Lancashire and Agricultural Machinery in Nantwich, Cheshire.

In Yorkshire, Ripon Farm Services has acquired the Kramer business of Kevin Walker On Site Plant Services, the main Kramer dealer in the north of England, to supply the loaders and handlers through all seven of its branches.

And Fendt dealer Redlynch Agricultural Engineering is the new Kramer dealer for Somerset and Dorset.

Ian Moverley says shortening the supply chain – now direct from Kramer to dealers to customers – will be helpful in respect of technical back-up and ensuring end-user prices are “competitive” with other makes.