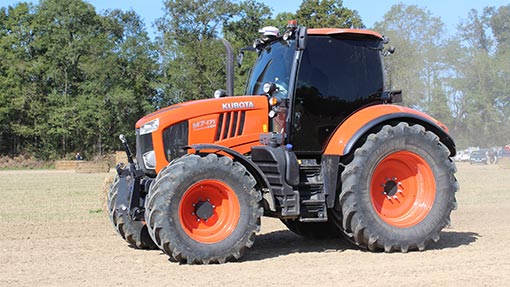 Japanese machinery giant Kubota has launched its most powerful and high-tech tractor yet in a bid to plunder some market share from the big four brands.

Called the M7, it’s fitted with a pokey four-cylinder engine, has the option of a semi-powershift or CVT gearbox and has enough electronic gadgetry to make Fendt owners take note.

Unlike its loader-lugging ancestors, the new model has its sights set firmly on frontline duties. That means it should take on ploughing, cultivating and drilling roles on mixed and arable farms as well as a bit of loader work if required.

Under the ginger bonnet Kubota has fitted its own four-cylinder engine with Adblue gubbins to clean up emissions. This develops 130hp in the entry-level M7-131, going up to 170hp in the top-end M7-171. 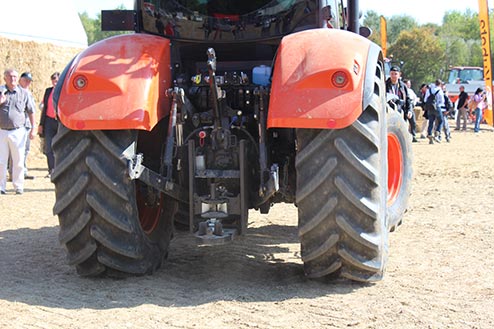 In the transmission department, buyers have the option of a ZF-built 24-speed semi-powershift or CVT. The powershift has four speeds with six splits in each and it has the option of fully automatic shifting through the whole range.

For fieldwork the auto function is limited to notching through the powershifts only and there’s a custom setting that allows you to limit the shifting range. There’s the option of a 16-speed creeper box, too.

Those wanting the smoothness of a stepless box get the option of the ZF-built K-VT transmission. This can be driven in joystick or pedal mode without the need to flick a switch and it has four speed memories that can be set in the computer. It also has a engine droop setting to alter the balance between power and economy. Both transmissions are available with 40kph or 50kph gearing. 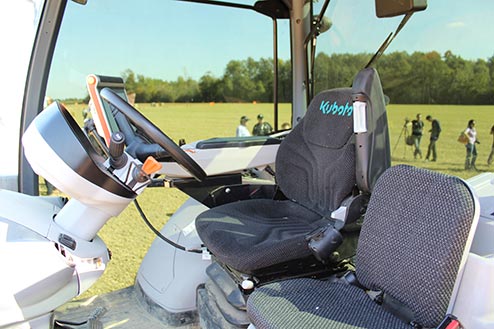 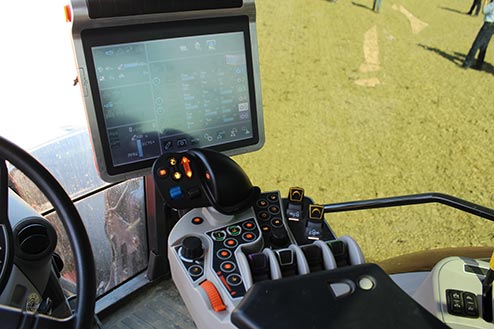 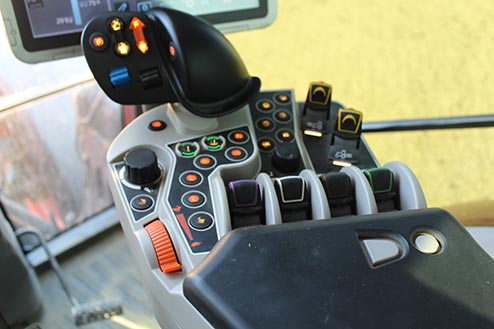 In the cab there’s a lot more clever stuff than you’d find in Kubotas of old. To start with there’s a 12in touch-screen that’s based on Kverneland’s Tellus monitor. This has been reprogrammed to handle most of the tractor’s main functions including transmission, linkage and hydraulic settings as well as setting up the headland management system.

A joystick has been fitted to handle the transmission, but it’s been littered with a few other buttons, too. These include forward and reverse shuttling, manual and auto-shifting functions (on powershift models) as well as rear linkage controls.

Several other buttons and switches are clustered around the joystick including a bank of electric spools, engine rpm memories and linkage adjustments.

To minimise the amount of view-blocking metal in the cab, Kubota has opted for a four-pillar design. This means visibility should be pretty good all round, but there are no side-opening windows to let the fresh air in. There is opening roof window, though, that should give the driver a decent chance of seeing loader attachments at full height. 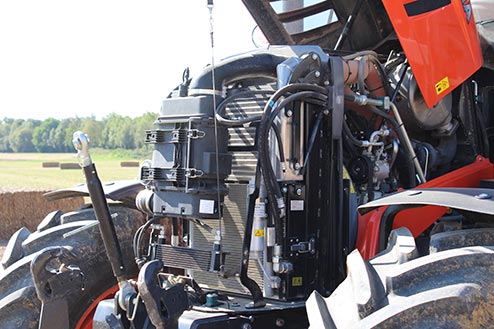 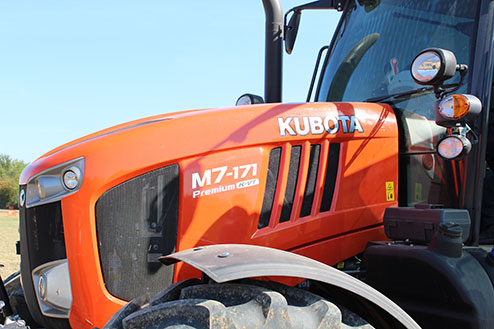 It’s not the biggest cab on the market, but there’s space for a proper passenger seat and there’s a reasonable amount of storage.

Weight is fairly high for a tractor of this size at 6.5t, but Kubota says this improves traction and is evenly distributed over the axles. Other notable features include a front linkage with pto, a purpose-built loader and enough space under the rear arches to accommodate a set of 650/65 R38 tyres.

By 2017 Kubota plans to be producing and selling at least 3,000 M7-series tractors a year. Higher-horsepower tractors are also on the cards as well as a full-line of Kubota-branded Kverneland and Vicon equipment.

This will include, rakes, tedders, mowers and balers as well as ploughs, drills sprayers and fertiliser spreaders. With this line-up Kubota reckons it will have the biggest range of single-branded equipment on the market.

Kubota-branded implements have already been launched in a number of European countries, but it will be a year or so before they start appearing on UK farms. And due to the strength of the Kverneland and Vicon brands in the UK they’re likely to creep in gradually.