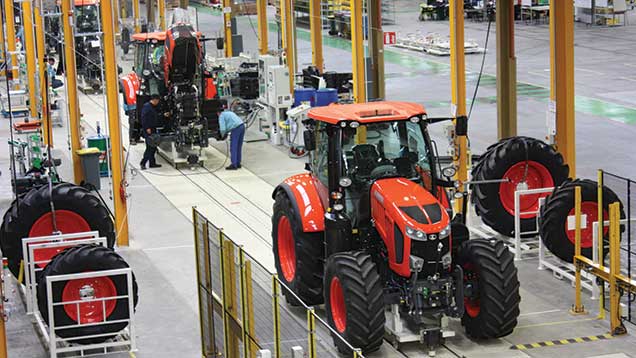 It is not often that a new tractor factory is officially opened in western Europe. But that’s exactly what happened in northern France last week when Japanese manufacturer Kubota uncorked the champagne (and saki) and invited journalists and dignitaries to the celebration.

The 115,000sq m factory at Dunkerque (just five miles from the French end of the Channel Tunnel) will make the firm’s 130-170hp tractors and save the company a long sea journey to boot. The plant was apparently originally used by a carpet manufacturer and ideal for the company’s purposes.

Though production has already started in a small way, production is expected to ramp up to 3,000 tractors a year by 2017. The tractors will go to Europe, Japan and Australia and add up to a turnover of some €15bn in the next three years.

Why did Kubota choose this spot? Being right next to the port facilities of Calais and Dunkerque was a big factor, says the company. But good existing infrastructure was part of the reason and the local authorities were keen to have the company come to an area which is struggling to maintain employment.

Kubota may still be a relatively small player in the over-60hp tractor market. But if you add its huge sales of smaller tractors, high-end mowers, engines and construction equipment, you come up with a total annual turnover of €11bn. That’s bigger than US machinery giant Agco, says the company.

Currently, 45% of Kubota’s revenues come from sales in Japan, but that figure is likely to drop as its exports increase. Though the company doesn’t currently have a six-cylinder engine in its product range, its steady push up the horsepower ladder suggests that it is likely to be considering that possibility.