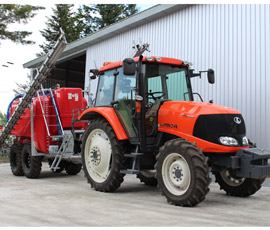 Kubota has revealed that it will launch a tractor with up to 200hp under the bonnet within the next three years.

The biggest tractor in the current line-up is 135hp, but at a press conference at its headquarters in Osaka last week, Kubota said it would have a machine with up to 200hp by 2016.

Very few details were given, but these are likely to be lightweight four-cylinder tractors with semi-powershift and CVT transmission options. They’re almost certainly going to be fitted with an SCR system and will probably be Isobus-compatible, too.

It also looks as though Kubota will develop the tractors in-house, rather than adding to the line-up by buying out another maker. However, it didn’t rule out another acquisition.

The higher-horsepower tractors are likely to be built in Japan initially, but the maker did say it was looking to build tractors closer to their final destination. So it’s possible we could see a European factory at some point.

As well as upping tractor horsepower, the maker also announced that it would start branding some Kverneland products in Kubota colours. Initially this will be a limited number of machines for specific markets and they’ll only be ones that are suited to Kubota’s tractor range.

Combines are also on the agenda. In Asia, Kubota is a big maker of rice combines and it’s looking to build a small conventional cereals combine using some of the same technology. This will be designed for Asian markets initially, but if it’s a success there’s a chance it could make it into some European markets, too.

Kubota also made it clear that it will be expanding its European presence and dealer network over the next few years.

The firm’s purchase of Norwegian firm Kverneland in 2012 will play a big part in this, says Kubota UK’s Adrian Langmead. “Buying Kverneland was a huge strategic deal for Kubota and it means there’s a lot more potential to expand and strengthen the dealer network.”

More to Kubota than tractors

Kubota is best known in Europe as a maker of farm and construction machinery, but further east it’s a far bigger business.

It’s been around for a long time, too. The business was founded in 1893 when it started making cast water pipes and this is still a big part of the business.

Last year the group’s revenue topped €9bn (£7.6bn), and 70% of this was from agricultural and construction equipment sales. Exports were also high with 50% of all sales coming from overseas.

Kubota builds most of its tractors in two main factories – Sakai in Osaka and Tsukuba near Tokyo.