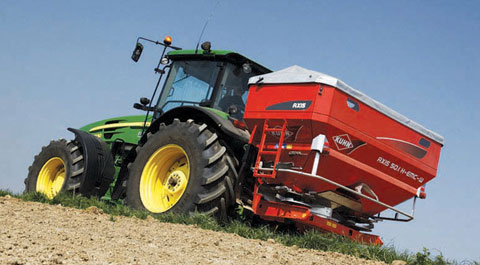 The first change to the Rauch-built spreaders is that they can now have the Electronic Mass Control metering system which was previously only available on higher-spec Axera models.

This varies application rate according to the amount of fertiliser flowing on to the disks rather than the weight in the hopper. Kuhn claims it’s a much more accurate method than using a weigh cell because it isn’t affected by vibrations, slopes or bouncing when driving on rough ground.

EMC is available on both hydraulic and mechanical machines, but it works a bit differently on each. Models with hydraulically-powered discs have pressure sensors in their oil pipes which can detect and monitor the amount of fertiliser being spread. The brains of the spreader then adjust the hopper openings accordingly to make sure the right amount is going through. 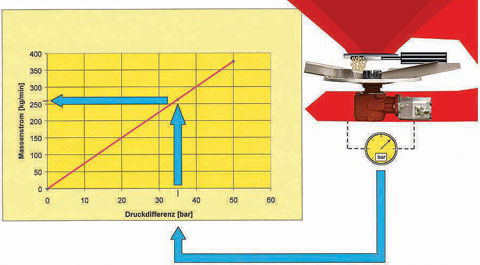 On shaft-drive machines, ultra-accurate speed sensors are used to measure the amount of force exerted on the shafts driving the discs. Depending on the level of force needed to turn the discs the computer can work out how much fertiliser is being spread.

With both machines these flow measurements are taken once a second. So if the fertiliser starts to run out a bit slower, the spreader will open the hopper outlets instantly to keep the correct rate. It will also adjust the rate if the driver changes speed or it gets a signal from a variable rate application map. Cleverly, the computer can tell if any lumps get stuck in the hopper openings and it will fully open the sliders for a split second to clear them.

Weigh cells are still available on Axis spreaders, but they are only there to tell the operator when to refill.

Another new feature is that all Axis models can be specced with a GPS on-off switch that reduces the risk of overlaps or misses on the headlands. The Opti Point system is linked up to the tractor’s GPS signal and can work out the right time to switch on or off depending on the type of product in the hopper. So, for heavy products that fly further the system will have a relatively long delay before switching on, but there’ll be a shorter one for lighter stuff.

It’s a bit of a fiddle to set up though – operators have to look up the product they what to spread on a chart which gives them the required time delay. They then manually key this into the control box or Isobus screen. 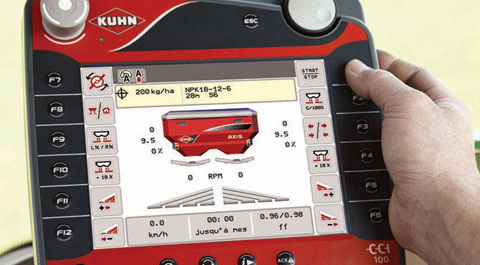 Hydraulic spreaders also get a new GPS-linked variable rate spreading system. This is called Vari Spread and can independently adjust the spreading widthon each side by changing the rotor speed and drop point.

This means the spread pattern can follow the shape of the field so you don’t get over or under application in the short ground. A basic form of Vari Spread is also available on mechanical drive spreaders, but it just switches off the flow on either side of the machine. 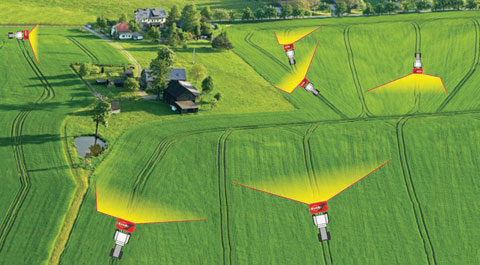 Electric drive could be available on Kuhn spreaders from as early 2014 according to Norbert Rauch. managing director of Rauch.

The firm has already produced a working prototype machine that uses electric motors to drive the disks and it’s potentially much more efficient than hydraulic or mechanical drive, he says.

He also reckons electric spreaders are easier to control than hydraulic motors and there are more opportunities for Tractor Implement Management where the spreader takes control of the tractor.

The technology already at a point where it could be launched as a commercial product, but the current price of the motors and the lack of tractors with electric generators mean there will be a delay before they take off.