One of the attractions of Lamma is that there is a vast amount of farm kit on display, whether you want to ogle the flashy top-of-the-range tractors or price up some more modestly-priced but useful kit.

We’ve rounded up some of the interesting kit on display including pivot-steer loaders, security kit for ATVs and some grassland kit.

After several years without a pivot-steer loader in its line-up, Manitou is ready to launch the revamped version of its once-popular MLA.

The 533-145 MLA-T made its first preview appearance at 2017’s Lamma show, but this year the machine is available to order now, with deliveries scheduled for May/June. 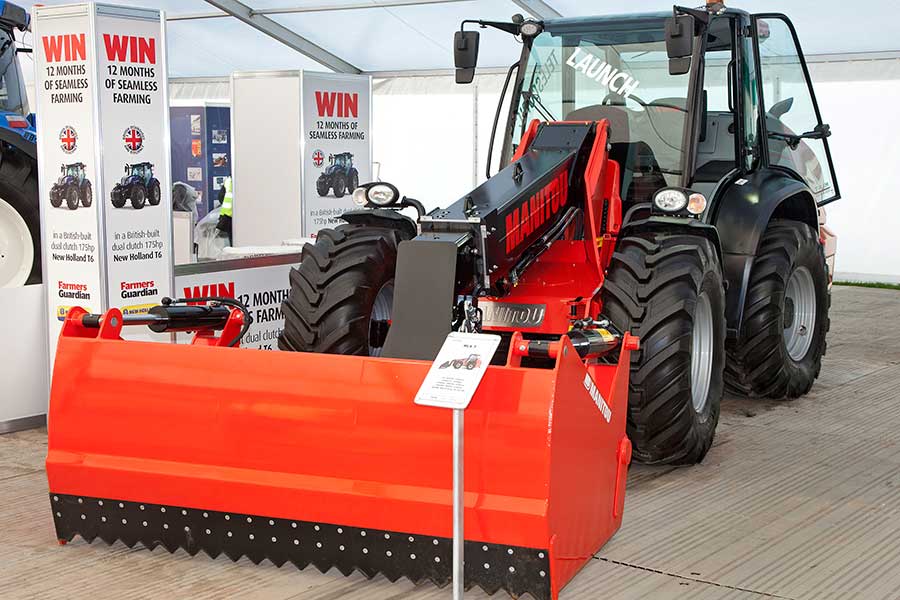 As for its performance, the front-mounted boom offers a 3.3t lift capacity and maximum lift height of 5.2m, with power coming from a 143hp, four-cylinder Deutz engine.

Those stats put it in a similar league to JCB’s TM320S, which has enjoyed relatively little competition for the past few years.

In the transmission department, Manitou has opted for a hydrostatic CVT gearbox rather than the powershift used by JCB.

From the driver’s point of few, this offers just one speed, but under the skin there are in fact two drive motors that kick in and out of gear depending on how much power is required at the time.

That means both work in tandem to give maximum grunt for low-speed shunting tasks, while just one works at higher speeds for more economical cruising.

At the moment there’s just one model in the range, but more are in the pipeline. Unfortunately, Manitou is remaining tight-lipped about how much it costs. As a reference, the JCB TM320S has a list price of about £82,600.

Loader attachment specialist Albutt was showing a new shear bucket, which is based on the firm’s shear grab, but has a floor instead of tines so smaller materials can be loaded. 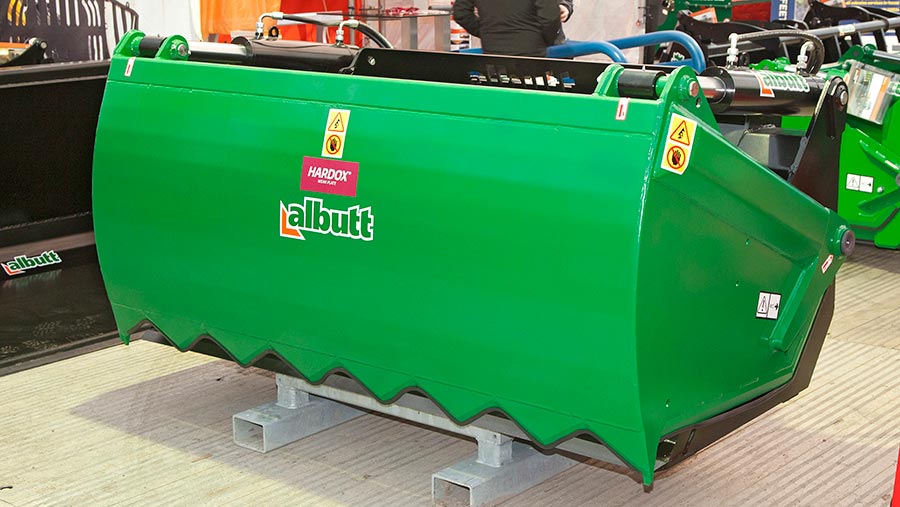 Available in 1.9m, 2.2m and 2.5m wide models, the floor has a Hardox steel leading edge to help with wearing metal costs.

It’s been tested with maize and most types of silage and initial reports are positive, claims the company.

Resembling the company’s A10 triple mower launched last year, the A9 has the same driveline, although some beefed up internal gears mean it can now chew through even the thickest swards.

There are now three teeth engaged along the cutter bar to transfer power seamlessly to all discs, while a longer pto shaft aids quicker lifting at the end of a run.

Widths stay the same from 8.9m to 9.2m and a new breakaway system is employed for when the mower hits an obstacle.

To get your hands on this new technology, the rear bat-wing style decks will cost you £45,223.

A raft of updates has been added to the popular Joskin Volumetra range, which sold around 25 models last year, with the most popular being the 18,000D. 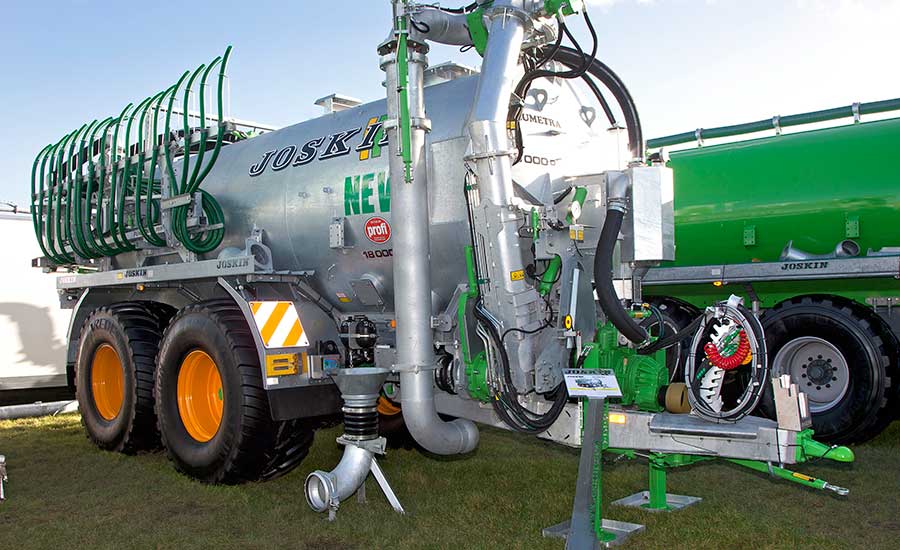 The new design is lower and stronger thanks to an all-in-one chassis and tank construction, which brings the centre of gravity down and allows the rear linkage to become part of the chassis for extra strength.

Along with the structural improvements, the hydraulic suspension can now adjust for the varying weight inside the tanker to spread the load and aid safer road travel.

Available on twin or triple axles, the model on the Joskin stand was heavily specced with auto greasing, hydraulic drawbar and a 12m dribble bar. It had been snapped up by a UK contractor and cost a smidge over £111,000.

John Deere Gator owners can add a plethora of accessories and creature comforts to their vehicle thanks to the efforts of Nottinghamshire firm Howard Marshall Engineering.

One of the latest additions is the aluminium Livestock Canopy, which clamps on to the rear load deck. This one-piece hood keeps the worst of the weather out and has aluminium bolted gates at the rear to keep the load in place. It’s available in various colours and costs £795. 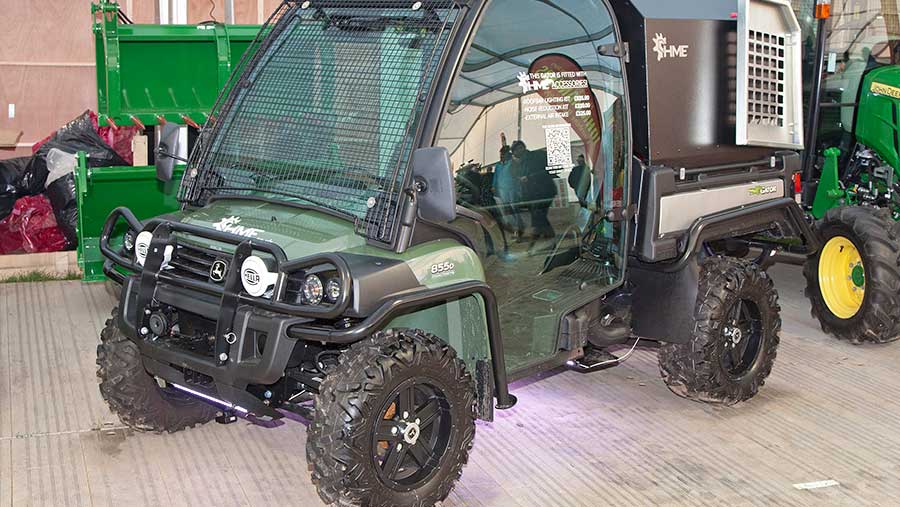 To help make life more pleasant in the cabin, HME also offers a noise reduction kit, which consists of various sound-deadening foam panels. These can be installed by the customer and offer noise reduction of 10db. To further quell the din, there’s an external engine air intake kit, which moves the position from behind the seat to above the cab.

The noise reduction kit costs £330 and the air intake adapter is £325.

Farmers fed up with their ATV “wandering” out of the yard can keep tabs on their whereabouts with this clever tracker from Silverstone-based ATV Trac.

The tool was originally developed for road-going motorbikes, but the levels of quad bike and buggy theft in the countryside have prompted the developers to introduce a specific agricultural version. 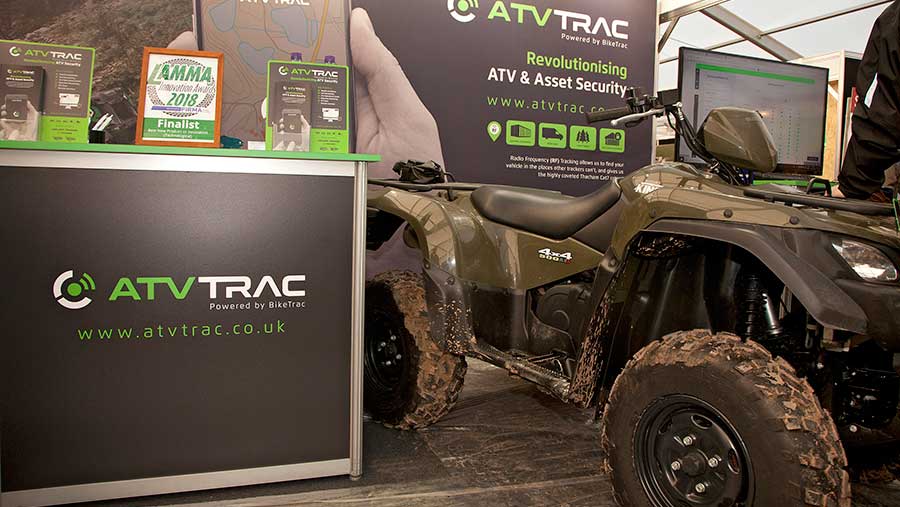 The tracker itself is a small black box designed to look like many components already found on the bike. This has a GPS sensor on board and if the bike is moved without the ignition on, it will send a text and email to the owner altering them.

If the farmer doesn’t respond, there’s also a UK-based call centre that will contact them to check all is in order. If the vehicle has been stolen, ATV Trac takes over and communicates with the police to try to find it.

There are several other features, too, including setting a virtual “fence” in which it can operate and keeping tabs on service intervals.

The unit itself costs £400 (inc VAT) and includes the first year’s subscription to the service. After that, the annual charge is £99, or there’s a monthly payment plan.