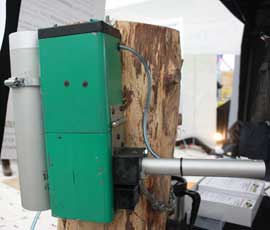 For anyone with a rat or squirrel problem Yorkshire firm Dasher Developments (07811 751839) had a couple of interesting auto-reset traps that don’t involve poison. Both use a cylinder of compressed air and a powerful air-ram to do the killing.

On the £150 squirrel trap, squirrels climb up inside a metal tube to get at nuts. As soon as the machine detects they are there, the air-ram triggers, propelling a moving plate against a static one with massive force, killing the animal immediately and humanely.

The dead squirrel then drops to the ground, where it can be collected later. Meanwhile the machine resets itself ready for the next arrival.

The compressed air cylinder holds enough air to kill about 15 squirrels, says the company, and a meter clocks up how many times it has activated. So even if foxes take away the dead squirrel carcasses, you will still know how many were killed.

There’s also a £300 horizontal version for rats that works on more or less the same principle. This has a clever twist to move the dead rat out the way once it has been despatched, however.

Once the rat has been killed by the force of the air-ram hitting it the rodent drops through a hole at the bottom of the unit into an enclosed tray (so dogs and cats can’t get at it). As successive rats come into the trap, the force of the air-ram also operates a linkage that moves their colleagues along the tray so they don’t block the hole. A red/green indicator on the machine shows whether it’s been activated or not.