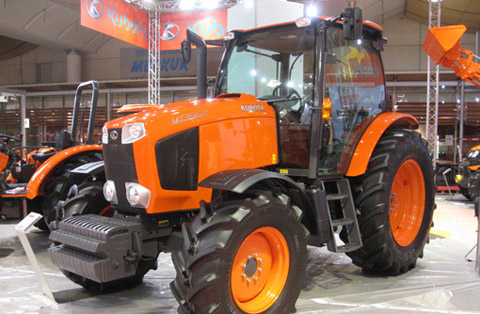 Fresh into the UK, the pre-production M135-GX is now the largest tractor in Kubota’s line-up.

Due to start rolling out of the firm’s Japanese factory later this year, it uses the same 6.1-litre, 4-cylinder engine as the current M130-X but differs in a number of other ways.

First up, the styling is markedly changed and along with this comes a new four-post cabin with decent acreages of glass and armrest controls that really make it feel like a big-little tractor.

On the transmission front, a third mechanical range has been added to the 16F x 16R box used previously, giving the M135-GX 24 forward and 24 reverse speeds with an eight-step powershift and clutchless shuttle.

While maximum speed is still limited to 40kph, the firm has now developed a suspended version of its tight-turning bevel-drive front axle.

For more go to our special LAMMA 2012 machinery page