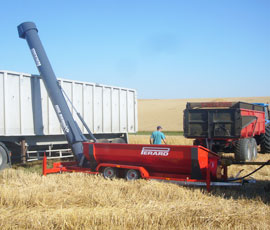 Genuinely novel types of farm machinery don’t come along very often, but a new mobile grain transfer hopper from French firm Perard could be one of them.

Powered by a tractor of 80hp or more, the Trans-eXpress allows you to move grain from a trailer to a lorry without the need for an expensive chaser bin.

The principle is simple: you take the hopper to where you need it, then you can tip a trailer-load of grain into it and auger it quickly into a waiting lorry, bin or grain drier. The hopper itself consists of a cross auger that takes the grain to the bottom of the main 500mm-diameter folding discharge auger.

The main auger has a maximum height of 4.9m, with an optional extension available to take that to 5.5m. It can auger out the contents of a 20t trailer in under four minutes, says Ben Clowes from UK importer Quivogne UK, Stabilisers keep the whole thing steady.

There are three models. The cheapest and simplest 500B version (£25,955) just has two slots to allow a telehandler to move it from place to place, so would be suitable for augering grain into a bin or drier. The 500T (£27,605) is designed to be moved about by tractor, so it has a drawbar and ag-spec brakes. The 500R (£29,205) is the most roadgoing version, with a car trailer type chassis and ability to be towed by a 4×4 or pickup. It is aimed at contractors.

As well as augering grain into lorries waiting at the side of the field, the hopper can be used to put animal feed into bins and even put woodchip intended for biomass boilers into a store.

Quivogne UK says it will also offer a wireless camera and screen set-up to make emptying grain into lorries easier. The camera is fitted on the end of the spout, pointing into the inside of the lorry trailer. The lorry driver, meanwhile, uses the screen to see how full he is and when he needs to move forward or backward.